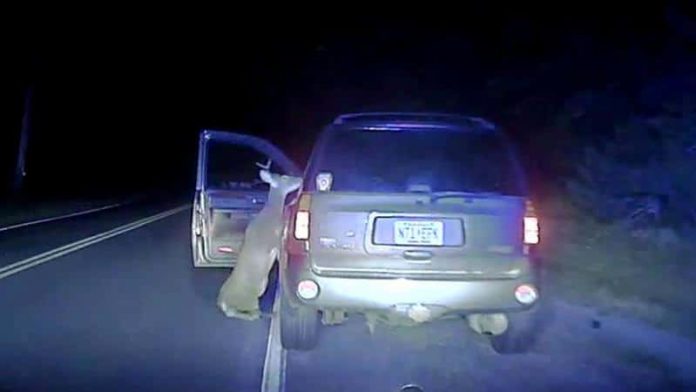 Dash cam footage from a Howell, New Jersey, police officer’s patrol car captured the moment a deer jumped up and attacked the driver after being struck by her SUV.

Officer Nicholas Austin was responding to a call for assistance when he witnessed the deer run into the back side of the SUV, jump up, then head to the driver’s side door, which was open at the time. The driver, Ellen Sager, 43, managed to shut the door to keep the animal out.

Sager later explained to Officer Austin that after initially striking the deer, it fell to the ground, then got up and ran across the street. The deer had gotten up and was running toward her for a second time when the officer came upon the scene.

Sager suffered a minor injury to her knee when the deer tried to jump through the door, but the animal later died from injuries it sustained from hitting the SUV.