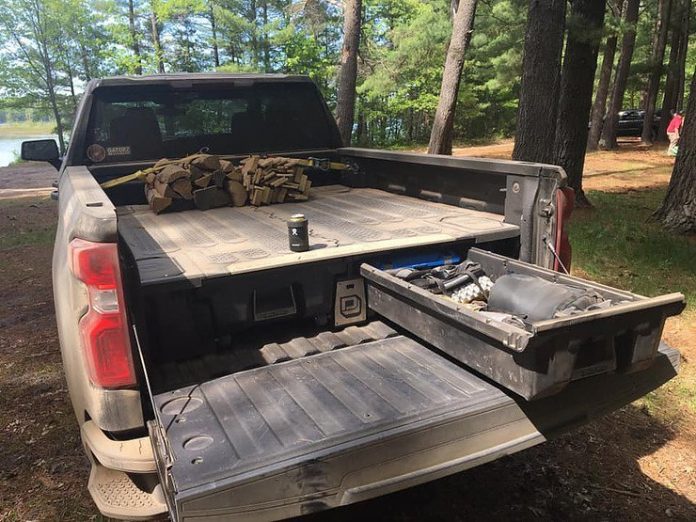 I recently traded in my 2015 Jeep Cherokee for a new 2019 Chevy Silverado Trail Boss. The first thing I noticed going from the Jeep to the Trail Boss was storage. In my Jeep I had a duffel bag with roadside assistance gear, recovery gear in case I got stuck and a portable air compressor. When I migrated everything over to the truck I ended up putting all that stuff under the seats of the cab. It all fit under the cab seats just fine, but as soon as I wanted to take my 105 pound German Shepherd with me, those seats had to go up.

At that point I had nowhere to put my roadside assistance and recovery gear other than throwing it inside the open bed of the truck. Looking over my options, DECKED kept coming up in my searches as well as conversations with those in the truck community. I decided to go for it and make the investment.

Once the unit was delivered I made a trip up to Northern Michigan to visit my partner in crime, Erik Meisner, to do the install before going out on the trails for a few days with Michigan Overland. The install was more or less quick and painless.

Now that everything was installed it was time to hit the trails. Now the DECKED system is rated to be waterproof, which it is, but dust is a whole different animal; it gets everywhere. Once we arrived to our campsite the 2nd evening of the overland trip, I opened the tailgate of the truck to access the drawer of the DECKED system that contained my camping gear. As you can probably guess, everything inside the drawer was covered in dust. This is not the fault of the DECKED design, it’s just the nature of dust.

With all the dust and the truck getting tossed around on the trail for two days, the DECKED system performed flawlessly. Upon getting home, the truck sat outside in two solid days of rain. Curious, I went outside to open it up and check for water. It was bone dry and still dusty from the trip. Not a drop of water in either of the drawers which is a testament to the design of the DECKED system.

The system is easily removable if you need access to the full depth of your truck bed, but I don’t really anticipate that being an issue. The system is going to stay where it’s at for a while to come. Now the challenge is to load it out that way I want. I think one drawer is going to be for my tools, recovery gear and other roadside assistance tools. The second drawer is going to house my hiking and outdoor gear so that I’m always ready for an impromptu hike or adventure.

Stay tuned for updates and photos of how I utilize the DECKED system with my travel and adventures.

Scott Witner is a former Marine Corps Infantryman with 2ndBn/8th Marines and was attached to the 24th MEU(SOC) for a 6 month deployment to the Mediterranean. He has completed training in desert warfare at the Marine Air Ground Combat Center, Mountain Warfare and survival at the Mountain Warfare Training Center, attended the South Korean Mountain Warfare school in Pohang and the Jungle Warfare school in the jungles of Okinawa Japan. He now enjoys trail running, hiking, functional fitness and working on his truck. Scott resides in Northeastern Ohio with his wife and two kids.