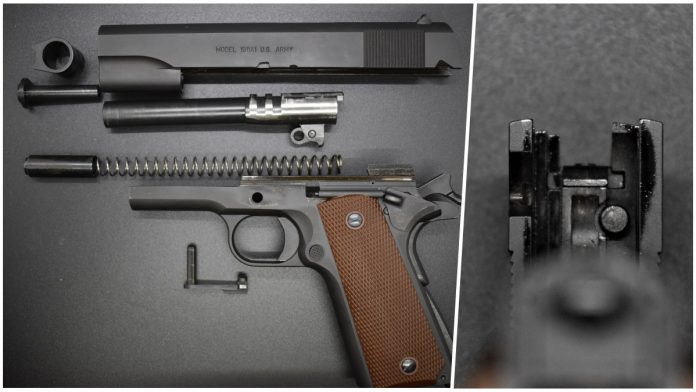 The shooting happened so fast that three off-duty officers rushing toward it couldn’t make a difference.

Last month at Saugus High School, California’s 21st mass shooting since 1982 left two victims dead and three wounded among the brushy hills of Santa Clarita. With a trio of officers heading straight into that chaos, the causalities were a jarring reminder of how fast tragedy comes once a gun starts firing. The campus has high fences and security cameras, but it’s not one of the 3% of American schools that currently use metal detectors. But even if it had taken that precaution, it may not have been enough.

If the student had gone through the detector (that was not there), yes they could have made a difference. But let’s break down all the things that would have to go in favor of security for it to have mattered. Because it could just have easily failed to make the difference.

In manufacturing, it is called stacking tolerances. The amount of error that can be allowed in a given part of a system before a failure of the system occurs that must be additionally calculated with the errors in all the other parts. This is all when individual parts are, technically, correct.

The security systems, any system, has only so much latitude that it can influence in favor of successful intervention or dissuading a motivated perpetrator. Those are its tolerances. Each more complicated item you add to that system can only work within its capabilities and influence in its limited sphere.

You get to a point where your system is so stacked to only work successfully in such a limited manner that it fails. This leaves people wondering why it was there, and what failed, in the first place? The very basic reaction to this is to add additional complexity, further limiting the specificity of system but biasing those who know of the system’s existence to believing its coverage far greater than is reality.

We see that bias in full swing with this article and its author’s either confusion… or perhaps deliberate obfuscation.

Not only do ghost guns exist outside conventional safety measures—background checks, restraining orders, general traceability—a new customized breed can now be made almost entirely of plastic. Some are forged by advanced computer numerical control milling machines, while other versions have been made with 3D printers. At least some of them have already slipped through metal detectors. In fact, investigative journalists report having been able to sneak a 3D-printed gun through the security system for the Israeli parliament—twice.

We go into a dramatic mix of misplaced information after the opening about the high school shooting and its use of a ‘Ghost Gun’ in a school without detectors. That shooting occurred with a 80% receiver finished into a 1911. A 1911 is almost all metal parts, the 80% receivers are generally aluminum or steel, not polymer. Even if it had been polymer the majority of the gun would have been steel and therefore detectable by screening machines that, I repeat, were not at the school to begin with if the student had gone through them with the gun at all… Yeah this one is quiet the rabbit hole folks.

The article has steered from the tragedy of a disturbed student attacking classmates in close proximity to law enforcement, to the fact detectors were not present to find the 1911 (if he would have passed through them to begin with), to the fact it was a 80% receiver 1911 and didn’t have a serial number, to the fact that 3D printing is a viable technology now and that security screening is still and will always be imperfect.

But all of that is written to lead you to the problem being identified as, ‘Ghost Gun’ and not individual system limitations for security. By the end of the paragraph you would think the student in California had printed some untraceable device that used stealth materials to slip in and kill his classmates before killing himself. A technology that has been used to sneak guns into an ally’s parliament chambers!

You are left with no notion that the only difference between the gun he used and any other handgun bought from a store is that no one put a number on the side. That’s it, the only physical difference. Every other part of the security net requires perfect social interactions to work, that includes the person committing violence doing what we want and walking into our security screen, something that person or persons are actively trying to avoid.

No one wants to say that good safety systems aren’t foolproof. They don’t want to acknowledge the realities that those tolerances exist and a lot of things must go how we want them to go for our safety systems to work.

But… Why bother with that when we can demonize a technology no one will understand, especially not from that explanation…

No one wants to hear, “There is nothing we could have done, at that point.” No one wants the public acknowledgement that the power to commit or prevent an act is so weighted in the hands of the perpetrators and that our measures against such will always be imperfect. They want to equate the acknowledgement of that with a refusal to do anything. If it is a refusal, it’s easy to blame someone for it.

If it’s impossible… then what? Do the best we can?

Yes. But making it the best requires recognizing the hard truths. That’s not something many are willing to do.