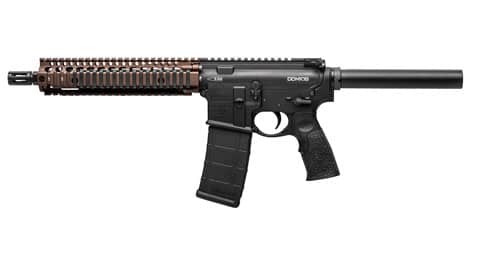 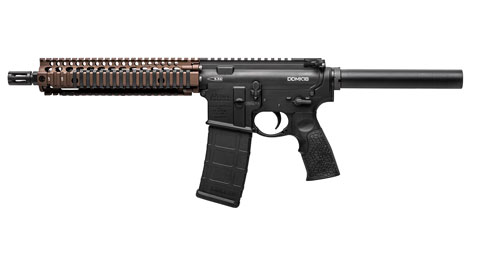 Daniel Defense introduces the DDM4v11 series of rifles with the newly designed SLiM Rail™ 15.0, their first rail system featuring the KeyMod attachment system. “Our customers have been hounding us for a KeyMod rail”, laughs Jordan Hunter, Daniel Defense Director of Marketing. “Not only were we able to deliver, but we managed to reduce the weight. You’ll be amazed at how light the V11 feels in hand.” The V11 is available with the 16-inch Government, 16-inch Lightweight, or 18-inch Strength-to-Weight (S2W®) barrel. The SLiM Rail™, which is an acronym for Slim Lightweight Modular, will be available for individual sale at a later date.

Simultaneously, Daniel Defense is releasing the MK18 Pistol and 300 Blackout Pistol. A recent ATF ruling making it easier to possess an AR pistol, and extended approval times for NFA tax stamps, has driven demand for the pistol variant. The MK18 Pistol is very similar to the MK18 Factory SBR—popular in the law enforcement and special operations communities—with a 10.3” barrel that is classified as an SBR (short-barreled rifle) under the National Firearms Act. The 300 Blackout Pistol, chambered in 300 AAC Blackout, also comes with a 10.3” barrel. Both pistols are designed with a 1.15” Diameter Pistol Receiver Extension opposed to a Mil-Spec receiver extension and buttstock and are not NFA regulated items.

President and CEO, Marty Daniel founded Daniel Defense at the turn of the 21st century. From its humble beginnings as a start-up company, creating rails and accessories for the AR-15 platform in small batches, Daniel Defense has grown exponentially over the last decade, and is now known for its premium line of firearms and accessories. Now with two locations and a combined 137,000 square feet of available manufacturing space, Daniel Defense looks forward to continued growth, as well as the opportunity to better serve their customers. For more information, visit www.DanielDefense.com.