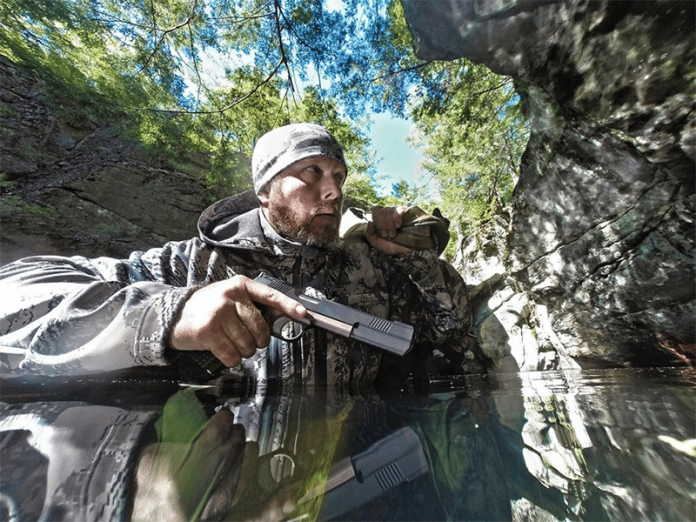 Dan Wesson brings the heat with a precision heavy-hitter The new Bruin Bronze from Dan Wesson is a 6.3-inch barreled 1911 chambered in 10mm Auto and designed specifically for hunting. The Bruin—which is Dan Wesson’s first long-slide 1911—is also available with an all-black finish at the same price, or in black chambered in .45 ACP for $130 less.

Dan Wesson Firearms was founded in 1968 by Daniel B. Wesson, the great-grandson of D. B. Wesson, co-founder of Smith & Wesson. Not surprisingly, Dan Wesson spent the early years of his career working for Smith & Wesson as a engineer, but when the company was purchase by Bangor-Punta he decided to go out on his own and built a factory in Monson, Massachusetts with the goal of manufacturing the best revolvers money could buy.

Wesson’s idea was to build “switch barrel” revolvers, where the barrel tube screwed into the frame and the front end of the barrel and removable shroud were secured by a special nut at the muzzle, permitting the consumer to quickly and safely change barrel lengths depending upon intended use. Wesson’s first production revolver was Model 12 .357 magnum which was introduced in 1969. The large-frame .44 Magnum came out in 1977, while the massive SuperMag series debuted in 1982.

I owned a Dan Wesson .445 SuperMag that I carried while fishing in Alaska. It was an extremely high-quality revolver that was entirely reliable and amazingly accurate. The only reason I sold it was that Smith & Wesson came out with the .500 S&W Magnum, which upped the kinetic energy level substantially.

After Dan Wesson’s untimely death in 1978 at the age of 62, the company started having financial problems. After two bankruptcies, the company was purchased by Bob Serva and moved to its current location in Norwich, New York. During his tenure, Serva introduced the first Dan Wesson mode 1911 auto pistols, priced to get the attention of shooters looking for a high-quality 1911 for less than the price of a good used car. Even so, the company faced further financial difficulties, and 2005 it was purchased by CZ-USA.

CZ-USA is the American arm of Ceska zbrojovka Uhersky Brod, a 70 year old company based in the Czech Republic that bills itself as “the largest firearms maker in the world.” Like Bob Serva, CZ-USA has focused its efforts on the Dan Wesson 1911 platform, with only one revolver—the switch-barrel .357 Magnum DW 715—currently in production. The Bruin is the newest 1911 in the Dan Wesson line.

Our evaluation Bruin chambered in 10mm charmed everyone right out of the box. While the bronze colored frame finish affords an attractive contrast against the matte-black slide, it was the massive profile of the thing that most impressed us. The long, blocky slide has a rail-free dust cover and a flat top—interrupted only by the long flared and lowered ejection port—with serrations machined into its entire length. Grasping grooves are machined into both sides of the slide, front and rear, and it wears a set of sights that any handgun hunter who uses iron sights would kill for. The front is a green TruGlo Tritium/fiber optic which stands out like a sore thumb day and night, while the rear is custom 2-dot night sight made by Trijicon that is fully adjustable for both windage and elevation. Both front and rear sights are dovetailed into the slide. The is no provision for attaching an optics mount. Controls consist of a slide release, magazine release and extended safety lever all found in their usual locations on the left side of the frame. An extended beavertail grip safety with raised palm pad and a skeletonized hammer round out the controls. All are finished in the same matte-black as the slide, except for the solid trigger which is silver. After about 1/32” of engineered take-up to “get on the sear”, the trigger breaks crisply at an average pull weight 4 lbs. 8 oz. with no stacking or over travel (which is adjustable). We would expect that trigger to lighten up a bit after the recommended 300- to 500-round break-in period.

Fit and finish were as good as any premium 1911 we’ve ever tested, and better than most. There was absolutely zero movement between the frame/slide and barrel/bushing. This pistol was so tight that we were unable to get the pointed corner of a piece of copy paper into any gap between the slide and frame or barrel and bushing. Overall length is 9.75 inches, overall height is 5.75 inches and empty weight with magazine is 44.2 oz.

The 6.3-inch, stainless steel, match-grade barrel employs a standard, single-piece guide rod. Dan Wesson must have talked with Les Baer about guide rods, as he almost fanatically opposed to the use of anything else in Les Baer Custom 1911s. The rounded mainspring housing is finely checkered—as is the front strap—and rounded at the base to prevent recoil from biting your palm. The grip panels—attached via twin round-headed Allen screws—are deeply textured and afford excellent grip traction.

We tested the Bruin Bronze from the bench at 25 yards using the following ammunition: SIG Sauer 180-gr. FMJ Elite Performance (sigammo.com; 1,250 ft/second muzzle velocity, 624 ft-lbs energy), Federal Premium 180-gr. Trophy Bonded JSP (federalpremium.com; 1,275 ft/second muzzle velocity, 650 ft-lbs energy) and Double Tap’s 200-gr. WFNGC Hardcast DT Hunter load (doubletapammo.com; 1,300 ft/second muzzle velocity, 750 ft-lbs energy). All loads produced admirable, sub-two-inch five shot groups, but the star of the day was Federal’s outstanding Trophy Bonded load, printing a 1.18” centered cluster. The SIG load was close on its heels with a 1.40-inch group, and not too far off that was the Double Tap’s best group size, measuring 1.74-inches. We did have one failure of the slide to go fully into battery, but outside of that, the Bruin’s reliability rate was 100-percent perfect.