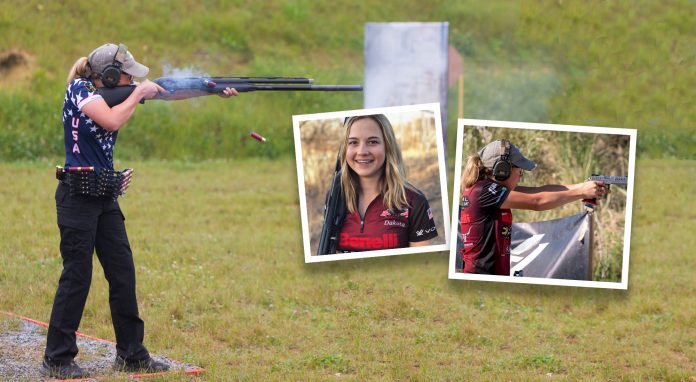 When I called to talk to Dakota Overland, her mom (and fellow A Girl & A Gun member Tiffany) said she was practicing loading her shotgun so she’d be just a minute.

Talking to Dakota was a delight. The 15-year-old is very thoughtful in her responses, taking a few moments to compose what she wanted to say. Dakota has done interviews across the globe and has even met with members of Congress with The DC Project. She started shooting in July of 2015 when she was just 12 years old. Twelve!

“My dad actually has a friend that had competed for the past ten years or so and has always tried to get my dad into it. But we’re kind of a ‘go big or go home” family so we didn’t need another hobby,” she laughs. Then they watched a Nordic Components match in 2015 and both became interested. “It was our first tactical match and it was frustrating,” she admits. But the thing that sets her apart from others, especially adults? Instead of giving up because it was frustrating, she decided she had to keep trying.

She takes that attitude with her throughout every match. The biggest lesson she has learned in the past three years is that a bad match doesn’t really determine her skill level. “I don’t let that discourage me. I’ve learned that if I have a bad stage to let it go. Because in the end it does a lot more damage if I carry that with me. That’s something I’m really working on because it’s really hard to do. If I do terrible at something it’s hard not go back to it but I need to do that.”

And that is also the advice she would like to give to other junior shooters. “Don’t let a bad stage or a bad match discourage you. I personally use it as a drive to be better. Usually I’ll look at the things I didn’t do well and practice them. And the things I did do well, like shotgun loading, I practice every day for half an hour and then I’m appreciating the work I’ve already done and using my failures as a drive.”

Dakota represented the U.S. in the 2018 IPSC World Shoot. She not enter the Junior Category in case there were not enough entries to meet the minimum criteria to be eligible for Junior Category awards, and she captured the Bronze in the Ladies’ category which included all ages. “It was very different than shooting in the U.S.,” she admits. “It’s such a big match with 700 or 800 competitors from 27 different countries. It was very nerve-racking. But it was also really neat because I got to meet so many different people from different countries but with a shared common interest. I would go back again, it was a lot of fun, and now I know what to expect.”

When asked what advice would she give to junior shooters about their parents, she characteristically paused to give her thoughtful response. “Appreciate what they do because I know that without my parents I wouldn’t be here now. I wouldn’t be able to do this without them. Really appreciate what they do and understand the sacrifices they make. Also don’t be afraid to express yourself. There have been a few times when I’ve just had to say, ‘This doesn’t really work for me.’ We don’t always see eye-to-eye so we need to be able to communicate and talk with them.” Over the past three years, Dakota’s parents have also learned a lot. “Over the time that I’ve been doing it they realized I have my own way of doing things and now they let me do things because it’s worked out better,” she laughs.

So what advice does she give to the parents of the junior shooters? “Don’t discourage them. My parents are really good about not discouraging me. There’s a few junior shooters that I’ve knows where their parent has pushed them really hard in their sport and they burn out and then don’t want to do it because its not fun anymore. Don’t be too hard on us, let us do our own thing but with some guidance.”

Dakota can’t say enough about the support of the shooting and competing community. “They are open and supportive. You don’t have to be a top shooter for them to accept you. You could finish last in a match and they aren’t going to judge you. They are so open and honest, it’s the only sport where your competitor will tell you how to beat them,” she laughs.

She has a hard time choosing a favorite memory so far in her short career. “Every match that I go to I see a lot of people and have a great time at all of them. But one of best was back in 2016 I had been shooting for about a year and I was able to attend MGM Junior Camp. Just going to camps and meeting juniors from across the country who share your interest is great.” Then she adds, “It’s also where I met my best friend.”

Dakota is grateful to her sponsors, Federal Premium, Benelli, JP Enterprises, Vortex Optics, Gunfighter Targets, and Arnzen Arms. “A giant thank you to them. Other than my parents, they [sponsors] are the people that allow me do to this sport and give me the chance to do this. My sponsors have given me opportunities that I wouldn’t have otherwise.”