Citing risk for terrorism and assassination, attorneys for Washington D.C. asked a federal judge to reconsider his July ruling striking down the District’s ban on handgun carry.

As reported by the National Law Journal, Irvin Nathan, the Attorney General for the District of Columbia asked U.S. District Judge Frederick J. Scullin Jr. to take another look at the case he decided in July.

The matter at hand — that of Palmer v D.C. — had languished with the courts for a period of five years before the judge issued his ruling striking down the District’s 80-year ban on carrying handguns outside the home. The city, however, now argues that Scullin did not take D.C.’s special status as a non-state enclave in mind.

“The Court unnecessarily determined that the right to carry a handgun in public is at the core of the Second Amendment, and failed to consider both the historical pedigree of prohibitions on public carrying and the District’s important justifications for its prohibition,” wrote attorneys for the District in a 23-page request filed Monday. The District maintained that the cases cited by Scullin in his decision dealt with states and rural areas while D.C. is a dense urban city.

The city also held that granting the carry of firearms by the public entails special risks, saying, “Moreover, the unique situation of the District—a known terrorist target with an unfortunate history of attempted assassinations by firearm—requires a careful analysis of the rights granted under the Second Amendment that is distinctly applicable to this jurisdiction.”

To this, attorneys for the plaintiff have already registered their disagreement over such a claim.

“That’s a silly argument,” Palmer attorney and noted Second Amendment scholar Alan Gura told NPR earlier. “The fact of the matter is that every city in America has important installations, foreign consulates, the President; members of Congress visit every state in the union. And the gun laws don’t change when important people are in town. You know who else is important are the people who live and work in Washington, D.C. And they’re important enough to be able to deserve to enjoy their constitutional rights.”

Pulling out all the stops, the city also held up that D.C. is largely a federal reservation, with nearly a quarter of its area controlled by the U.S. government and that the 15 million tourists who come to the District to tour this seat of power further calls for special consideration.

Then the city held up its own crime rate as an additional consideration, citing some 75 percent of all homicides in the District are firearm-related. Further the District maintained that the “age-adjusted rate of firearms deaths– intentional and unintentional– is significantly higher than the national rate and those of Maryland and Virginia.”

For all these reasons, the District asked the Scullin set aside his ruling. Nathan had just last week asked the court for more time in the case.

Scullin has given the District until Oct. 22 to enact legislation to either comply with his ruling or file an appeal. 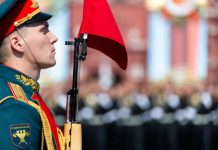