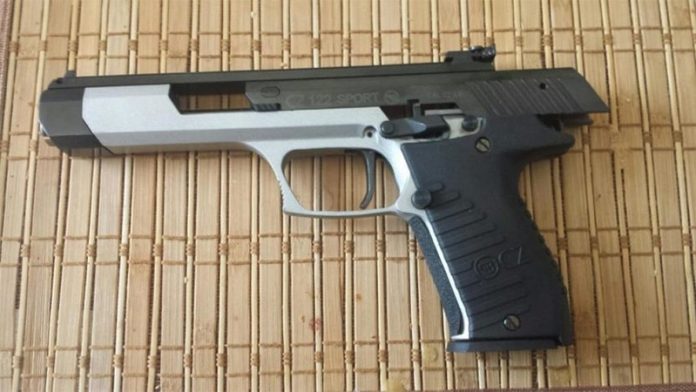 It’s marked with the logo of CZ-UB and appears to owe nothing to the CZ-75. It’s just an attractive, modern .22 target pistol. (Look how low the bore axis is!)

A few of these were imported about ten years ago… to Canada. None to the Great Red White and Blue South. So they have more to gloat about than the bulk of the world’s greatest hockey players.

And no, we don’t know why they weren’t brought here. Maybe they think they can’t be price-competitive with Rugers, Brownings and other mass-produced .22 plinkers?

We think we’d want one even if it wasn’t a CZ, because it’s cool looking. Maybe there are some echoes of the Kratochvil brothers’ vz. 50 service pistol and vz. 52 army pistol designs in it? It’s got just a little “space gat” vibe to it.

We found it here, and there’s a Reddit thread where the guy who posted the picture said this about it:

CZ 122 sport edition. Chambered for .22LR. Not too much other information on this specific gun. Shoots like a dream and is pretty space-ey.

From my understand they are mega rare. No idea on production run. They are 875 grams, hold 10 rounds and are 24 cm long. Buddy found it here in Ottawa and has seen one other out in Calgary. According to some people of gun blogs from 2005 they didn’t import them into the states.

Wonder what it’s story is. We’ll have to dig into the latest Czech language sources and see.