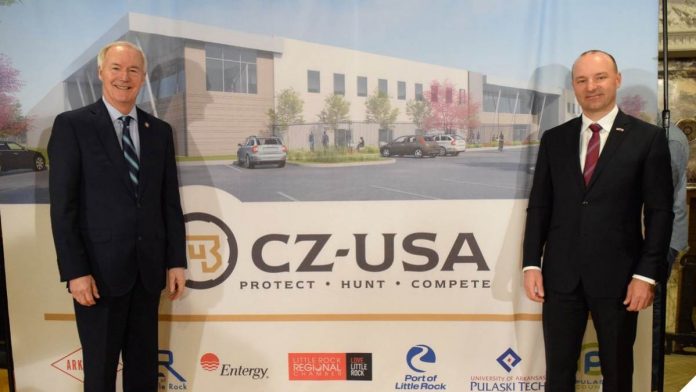 Arkansas Gov. Asa Hutchinson, left, and CZ-USA’s Chairman of the Board, Bogdán Heczko, was on-hand to announce the company’s new plant in the state. (Photo: Hutchinson’s office)

Legendary Czech gunmaker CZ announced Tuesday they will be opening a new plant in Arkansas that will be their U.S. headquarters.

During a ceremony in Little Rock this week, the company was welcomed to the state with open arms by Gov. Asa Hutchinson, flanked by local officials and representatives from the Czech government. The 65,000 sq. ft. manufacturing facility, to be completed on approximately 73 acres at the Port of Little Rock, will yield as many as 565 jobs in two phases as part of a $90 million investment from the company.

“We are honored to have a world-renowned brand such as CZ call Arkansas home,” said Hutchinson, who said he met with the company first at SHOT Show in January. “The location in the growing Port of Little Rock, combined with the high-paying jobs created by the company, will improve the quality of life for all Arkansans.”

Hutchinson, a Republican who served as head of the National Rifle Association’s school security task force and has signed numerous pro-gun bills, said Arkansas and CZ saw eye-to-eye during the recruiting effort to bring the company to the state. “Arkansas was selected because of the relationship that we have built with CZ. Because of our workforce commitment and our business-friendly approach to a growing company in the firearms industry,” said the Governor.

Bogdán Heczko, CZ-USA’s chairman of the board, confirmed, “The Arkansas workforce, culture, business climate, and industry support cleared the way for us to choose Little Rock as our new home.”

Arkansas currently serves as home to Nighthawk Custom and Wilson Combat while Remington has a large ammo plant in Lonoke. In 2013, Thermold Magazines announced it would shift its headquarters and manufacturing operation from North Carolina to the state. Likewise, Sig has its ammo plant in Arkansas. Walther is building pistols in Fort Smith, shipping out their first PPKs earlier this year.

Importantly, the CZ plant will be the only one located outside of the Czech Republic although the company exports to more than 90 countries. CZ-USA is currently based in Kansas City, Kansas, importing guns from Europe and distributing them to U.S. retailers. That operation currently employs 70 people.

CZ is not the first European gun maker to establish roots in pro-gun Southern states. In Georgia, Heckler & Koch is building a plant while in Alabama, Austrian-based Steyr opened first a warehouse and then a manufacturing component in Bessemer. Meanwhile, Beretta has been full speed ahead on production in their new state-of-the-art manufacturing and engineering center in Gallatin, which opened in 2016.

Construction will begin on the Czech gunmaker’s new plant immediately, with initial start-up planned for March 2020. Hutchinson said jobs at the plant will pay as much as $22 per hour. CZ-USA is currently seeking qualified applicants. 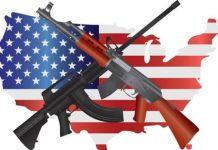 The Bill for Our Rights