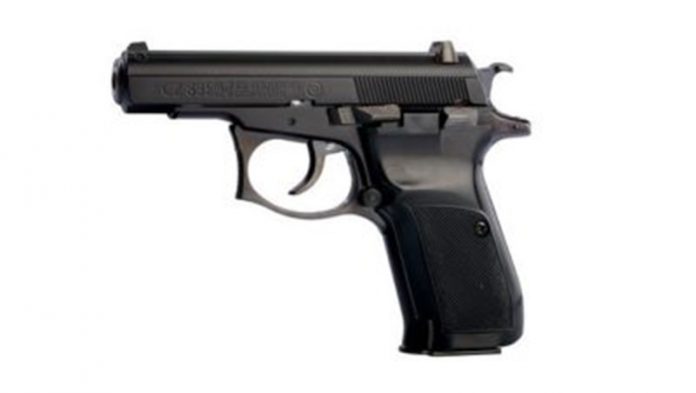 James Bond likes the CZ 82. Okay, so Bond’s signature firearm was a Walther PPK, and not the CZ, but at my first sight of the Czech military pistol, I couldn’t help but to recall the hero’s famous blued compact. The Walther’s design predates the 82, and its Russian predecessor, the Makarov, by many years (49 and 20 years, respectively), but in addition to their passing resemblance, they are all blowback operated firearms.

The physical resemblance was enough to call the CZ 82 to my attention, but the price (being a military surplus firearm, they’re not too difficult to acquire with a holster and mag – or two – for somewhere in the realm of $200) was what encouraged me to do some reading up on it and the 9x18mm Makarov cartridge.

The Russian Makarov PM was designed in during the Cold War, in 1977. It adapted the German “9mm Ultra” cartridge into what would become the 9x18mm MAK. The round is slightly shorter and wider than the NATO standard 9x19mm variant. Consequently, any NATO force that came across 9×18 ammo wouldn’t be able to use it for their standard sidearms. In 1982, Czechoslovakia (then closely tied to the USSR) improved the Soviet single stack with their military issued VZ 82 (often stamped CZ 82 for US import). The VZ/CZ 82 was the double stacked compact Makarov pistol issued to the Czechoslovakian army until their dissolution into the Czech Republic and Slovak Republic in 1993.

More than any other element, there is one feature that made this gun stand apart from other handgun I’ve fired: it’s blowback operated. That method of function impacts both its design and performance. With the blowback style of operation, the force of the pressure caused by the gases that expand upon igniting the gunpowder within the casing causes the bullet to hurtle forward, exiting the barrel. But, as Newton’s second law teaches, for every action, there is an equal and opposite reaction. That is, as the bullet speeds off in one direction, the same force acts in the opposite direction upon the slide. As the barrel and frame of the CZ are integrated, the slide moves rearward, compressing the recoil spring and ejecting the spent casing. The recoil spring then forces the slide forward again as it decompresses, stripping the next round from the magazine and pushing it into the chamber.

This operation gives the sensation of recoil a very different feel from short recoil operated handguns, such as the M1911 or Glock 17. The sensation is a pronounced, snappy kick, and the visible result is in its muzzle flip. Ballistically, the 9×18 Mak cartridge is closer to the .380 ACP (9mm short) than the 9x19mm Parabellum, so, although the recoil is snappy, it isn’t forceful, like how the .45 ACP pushes back, and target re-acquisition is still quick.

The CZ 82’s blowback design also gives it a unique takedown. To field strip the CZ, the trigger guard must be pulled forward (toward the muzzle) and down (how odd is that?). Next, the slide must be pulled rearward to its fullest extent, and then lifted upward to separate it from the frame. Field stripping the CZ reveals the oddity of its frame-integrated barrel. While having fewer parts makes the takedown (and, conversely, the reassembly) simple, the more important benefit it offers is in accuracy, as the barrel is connected to the part of the gun that the shooter grips.

In most short recoil operated firearms, the barrel unlocks from the slide by “tilting” vertically, allowing the slide to continue moving backward over it. The movement of the barrel between each round fired makes it less accurate than a barrel that remains fixed. However, the barrel feature that most contributes to the CZ’s accuracy is its rifling. Like the barrel of a Glock, the CZ 82’s barrel has polygonal rifling – slightly more accurate than traditional rifling.

As I mentioned earlier, the CZ 82’s blowback operation gives it a unique feel at the range, especially in terms of recoil management. At nearly an inch and a half wide, the CZ’s grip is round and large. The CZ 82 is a smaller handgun, but it still offers grip space for all three fingers. The trigger on the CZ is DA/SA. In double action, the pull is long and heavy. The single action pull is lighter, but still somewhat long. It’s not clunky, but not as crisp or light as a Glock, or even the Beretta M9. The trigger may not be remarkable, but at least it doesn’t detract from being able to shoot it well. The sights, on the other hand, are a definite weak point. The rear sights are two small white dots, and the front sight is a narrow white blade.

On the model for this review, the paint of the front sight was almost completely chipped off. After a little research, I’ve found that this is a common issue. It seems to be an unfortunate side effect of picking up a military surplus weapon – they’re often well-worn. A couple coats of cheap fishing lure paint helped brighten up that undetectable front sight, though, and now I have less issue tracking my sight picture.

This Czech gun lives up to CZ’s reputation for building solid pistols. After firing a couple hundred rounds of milsurp, Blazer, and even Winchester white box through it, I’ve only had one failure to feed (with the WWB). Unlike my Kimber SIS Pro, the CZ 82 doesn’t choke up when running dry and dirty, either. Pull the trigger, and it goes bang, every time.

This pistol performs reliably and accurately, but when considering it for conceal carry, its small size is another advantage. It’s not a pocket rocket, like the Nano. Where the Nano measures just over 4” tall and 5.6” long, the CZ 82 is notably beefier at 5” (tall) by 6.8” (long). But where the Nano only carries 6+1, the CZ’s double stack mag holds 12, and one in the chamber. The trigger on the CZ 82 is DA/SA, and it also has an ambidextrous frame-mounted safety. This allows the carrier the option of “cocked and locked,” or to carry with the hammer dropped. But, while the hammer is dropped, the frame safety cannot be engaged.

The magazine release can also be engaged from either side of the pistol. As I mentioned before, the 82 isn’t a pocket-sized sub compact, like the minuscule Nano. At 28.6oz, it’s closer to the full-size Beretta M9 (weighing 33.3oz). There are lighter options on the market with increased capacity (e.g., the Glock 19 at 20.99oz with a magazine capacity of 15 rounds, standard), that give the heavy CZ competition in the compact handgun realm.

Another point to evaluate is the ballistics of the 9mm MAK round itself. At the time of its design, it was the largest round possible with blowback operation, but the limits have been pushed since the original Makarov’s inception in 1977. For example, HiPoint pistols are low-price firearms that currently utilize blowback operation for calibers .380 ACP to .45 ACP. With muzzle velocities in the 1k fps range, the 9mm MAK is ballistically closer to the .380 than to the 9×19 Luger (with typical velocities ranging from 1,200-1,400 fps). The lighter punch of the round amounts to less penetration, which is a notable consideration for self-defense firearms.

The CZ82 has some history associated with being carried by the Czech military before the dissolution of Czechoslovakia, but its operation and simplicity make it an interesting firearm apart from the politics associated. The operation is unique and takes some getting used to, but it allows for an accurate little pistol that doesn’t kick too hard. It’s not the smallest compact on the CCW market, but it does offer decent capacity for its size. The sights and trigger pull could use a little attention, but for the cash you’d be dropping on it, it’s a reliable performer. The CZ82 may not have the fame tied to Bond’s little Walther, but, if you’re a good enough marksman, you’ll never miss.

Destinee is also a vlogger. She publishes videos on weapons, gear, and fitness on her YouTube channel every Tuesday and Thursday.