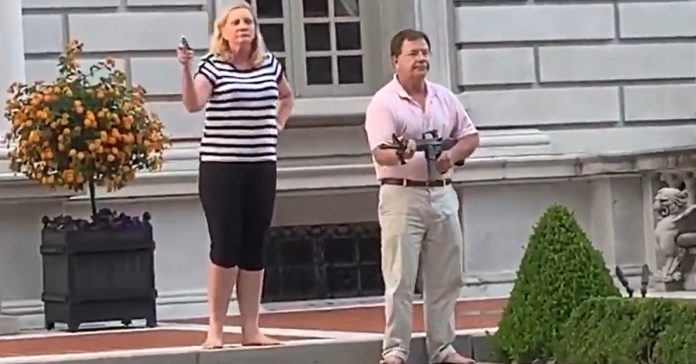 The McCloskeys, the couple who drew national attention during a BLM march through their private neighborhood by waving an AR-15 and a small semi-automatic handgun at trespassing group, have been indicted on two charges. The couple is charged with felony ‘unlawful use of a weapon – exhibiting’ and ‘evidence tampering’.

The unlawful use of weapon – exhibiting charge is fairly straightforward. The McCloskeys are on video pointing the rifle and handgun at the trespassing crowd. Claims have been made that the rifle was unloaded just as the claim that the pistol was inoperable but that usually has no bearing on a menacing or exhibiting charge just as a faux firearm or facsimile can still be considered a reasonable threat in a use of force case.

The couple now faces the task of proving that their actions with the rifle and the handgun were justifiable under the circumstances with the trespassing BLM crowd. The misdemeanor charges of trespassing against nine of the protesting crowd members were dropped by the prosecutor’s office. The destination of the protest was the mayor’s residence in the neighborhood.

Arguments can be made with merit from both perspectives that what the couple did was within reason or outside of reason, but in a time full of political and prosecutorial tension the odds that there is no political motivation behind the indictment are slim. Making an example of the McCloskeys even with a Governor’s pardon already spoken about, perhaps especially with that, is a show of solidarity towards the protestors.

The gate of the private community was passed, allegedly broken through, but none of the BLM crowd entered the McCloskey residence. It is unknown if any of them even got on the McCloskey property within the neighborhood or if, as the protesters state, they kept to the privately shared street.

The McCloskeys themselves have become national names and even appeared at the Republican National Convention to speak on their experiences and the topic of law and order.

“The government chooses to persecute us for doing no more than exercising our right to defend ourselves, our home, our property and our family,” Mark McCloskey said. “We didn’t fire a shot.”

Political motivations aside, the case comes down to whether or not the McCloskeys were exercising menacing force within their rights, and that is a rather big if, since the BLM protesters had broken through a private communal gate and not the McCloskeys’ own front or back doors.

They were well within their rights and good sense to be worried about a more violent outcome, as had been borne out across the nation in several cities, but did the McCloskeys have a right to intimate and menace deadly force from their porch to the protesters for trespassing, even if the supposition that the protesters broke down the gate is accurate.

I am not a lawyer, but an unmanned private communal gate to the community would likely be treated similarly to an unattached shed or unattached garage. The right to protect property with lethal force is almost universally disallowed, lethal force is limited to protection of life.

Missouri recognizes the “castle doctrine” and allows residents to use force against intruders, without the duty to retreat, based on the notion that your home is your “castle.” This legal doctrine assumes that if an invader disrupts the sanctity of your home, they intend to do you harm and therefore you should be able to repel their advances.

Missouri’s law is more extensive than the law in other states because it permits property owners to use the amount of force reasonably perceived as necessary, including deadly force.

However, case law suggests it does not go so far as permitting the use of deadly force to merely protect property. In 2016, the Missouri Court of Appeals for the Eastern District held in State v. Whipple that deadly force under the castle doctrine can only be used when you reasonably believe such force is necessary to protect yourself or someone else from “the use or imminent use of unlawful force.”

Just like someone breaking into a nonresidential structure, the gate is unlikely to count under ‘Castle Doctrine’ or stand your ground. It might be private property and be used to control entry into the neighborhood as a whole, but it is not a barrier directly to a residence.

A parallel example would be that I cannot threaten someone with force just for them parking in my driveway, I cannot do that even if they hit my parked and unoccupied truck and I believe they did so deliberately. Neither of those acts put my life at risk so lethal force would not be reasonable.

“Well what if they come after you next!?”

Fair question, hypothetical advocate. At the moment they switch from going after my unoccupied truck to going after me, then it is reasonable. But not a moment before.

The McCloskeys have the task of proving that they felt their lives were reasonably at risk from the crowd and that exhibiting the firearms to the crowd was reasonable and prevented an assault on their persons. Not an impossible task, not something I will even say is an inaccurate assumption on their parts especially since it is the action they took so they clearly felt it was necessary.

The question is, was it reasonable? Is the privacy of the neighborhood enough to make their actions and assumptions reasonable especially considering what had happened at past BLM protests. Were they within their rights to brandish the firearms outside their home but from within their property?

Were I defense, the damage and breach of the gate combined with the reasonable knowledge of past riots in other locations would be central to that argument along with every instance where the crowd did encroach into the McCloskey property from the street. The closer to the residence and the greater the number of encroachments, the more reasonable the McCloskeys’ actions become. If there is definitive evidence that the crowd approached onto the property, especially close to the residence, before the McCloskeys emerged with the firearms and that the firearms came out as a response, that would be the crux of the argument.

The McCloskeys case is a hard one, like the Rittenhouse one, because of subjective social complexities within it, everything is subject to perspective. Without a doubt boundaries were crossed by both the protesters and the McCloskeys that, in wisdom and hindsight, probably should not have been. But is crossing them worthy of a felony charge? Is the felony charge spurious and inconsistent with current realities? Does the prosecutor’s office dropping the charges of misconduct against the trespassing crowd indicate a bias? Again, all highly subjective and very much based upon the opinion of who you currently think is ‘in the right’.

Hard cases are on deck in the courts right now and in the era where ‘feelings > facts’ and ‘make your own truth’ I don’t know where this leads.

Since we talked SMGs, let’s do Assault Rifles too

5 Must Have EDC Items