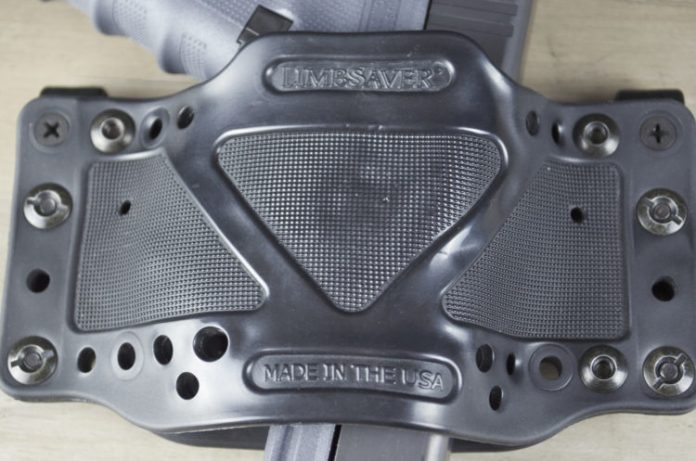 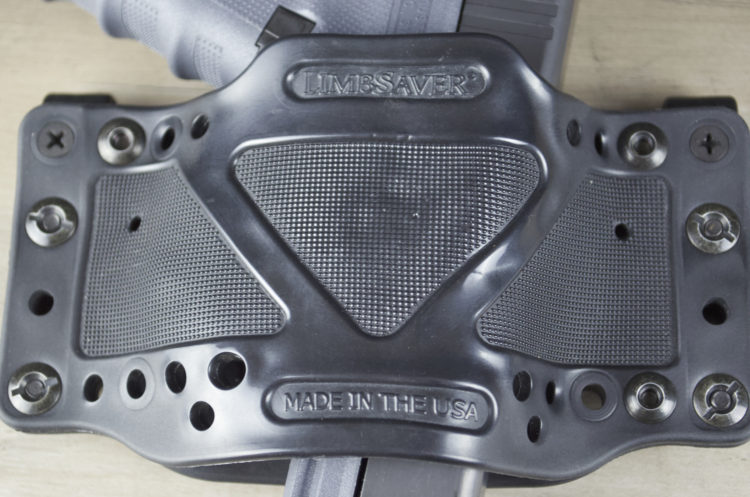 When it comes to holsters I’m looking for a particular set of criteria to determine whether it is a good functional product. It may seem obvious but aesthetics doesn’t really play a role in my criteria, although people tend to get hung up on how holster looks as opposed to how it performs.

The first thing I’m looking for when it comes to holsters is the clips or attachments. By that I mean how does the holster stay attached to me and my body. Of course all of this is meaningless if I don’t have some type of sturdy belt system so for all intents and purposes I’m wearing the Blackbeard Tactical belt which is an amazing belt (review on that coming soon.). 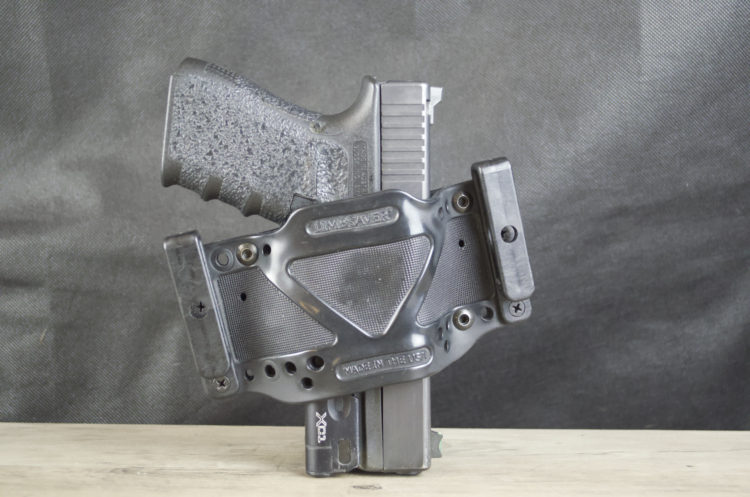 The crosstech holster has some very well-built belt clips which can be attached for IWB or OWB use. I won’t get into the nuances of the disadvantages with clips and snaps because generally I feel like that’s more of a preference thing as opposed to a need or want thing. For instance some people like the ability to be able to take off their holster when they come home and put it back on if they’re running out to do an errand such as people who live in urban environments like myself. There are other people where it’s no big deal and in fact they are committed to making sure that the holster never comes off their body unless they do their belt and that’s fine too. I’m going to give the crosstech belt attachment method a 4 out of 5 just because we all know with clips they can come off it’s just a fact of life and a compromise.

The next thing I’m looking at is the material that the holster is made out of, which in this case is the flexible rubber-like Limbsaver material which sets this holster apart from what you see with other all-purpose/universal holsters.

Generally when you see these one-size-fit-all holsters you can see just a holster that just doesn’t ever fit right. No matter what gun you put into it there is something wrong. Now with the cross tech holster it’s actually pretty consistent as far as what to expect with any pistol you put in it meaning the cant is going to be relatively the same ,the fit and the feel are going to be relatively the same I tested this with two Glock 19s and a single stack M&P 9MM Shield. 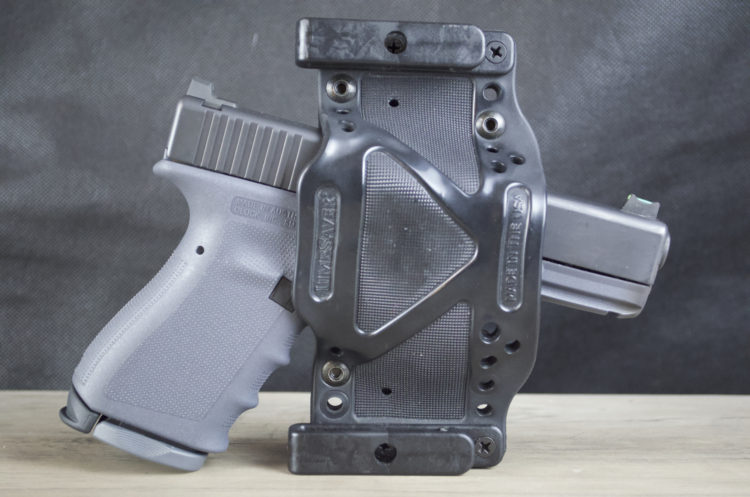 Now the cross tech did okay as far as keeping the gun in place. It’s also worth noting since it’s designed to be adjustable that we’re going to experience some play as far as with the fit and the retention of the holster. Even using a heat gun to form fit the holster to each gun they were still issues as far as space and fitting of the guns while they’re in the holster. Then there’s also the chance of screws coming loose and just the amount of things that can go wrong. For those Reasons I’m going to give it a one out of five for retention.

The next thing I’m looking for in a holster is concealment during wear. Comfort is not a factor to me here. Carrying a weapon is not supposed to be comfortable that is just bonus if it is. So as advertised the cross tech says the orientation of your firearm can be either straight or canted. I didn’t really find this to be an option. Despite using and moving the adjustment screws I found that the gun was slightly canted forward no matter what I did. Not terrible but not ideal either. However my firearm concealed very well under my shirt and no one could tell I was carrying. For context I normally wear some type of lightweight cotton t-shirt and 511 jeans. For concealment I’ll give the cross tech holster a 5 out of 5.

Once a holster has met with the criteria above the next thing I’m worried about is training with it. It doesn’t matter to me if you’re talking about a Daniel Defense rifle or a shooting belt. If that item cannot withstand simple drilling and pressure testing it is simply a doo-dad in my opinion.

It is habit for me to dry fire 5 to 10 minutes before leaving the house. Before I go on let me first say that I carry everyday a Glock 19 with a Surefire XC1 attachment and Wilson Combat sights. Now while the sights are robust they are not suppressor height by any means. Going through my dry fire drills I noticed the front sight constantly got caught on the draw and it was also difficult to holster the gun. 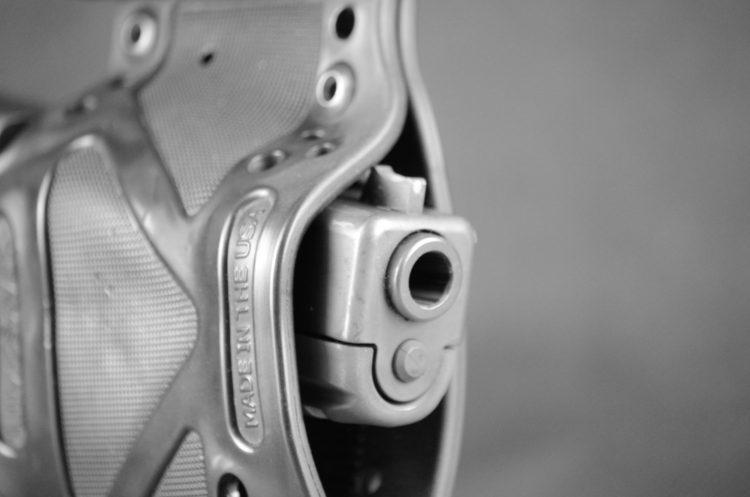 The next thing I did was some clinch fighting and grappling (video below!) with the holster as part of my EDC. Now because of the can’t of the holster it’s difficult to get a good grip on the gun to draw. Also drawing under tension was quite difficult as the front sight continue to get snagged on the draw. I went back and use the M&P Shield as well as the blue gun  version of the Glock 19 and came with the same results minus getting snagged on the front sight. This tells me that aftermarket sights or something to consider if you’re going to be using the cross tech holster.  It’s also a good time to point out why it’s so especially important to test out your gear in a controlled environment. If you look at the pictures below what you’ll also notice the depth of the holster/gun which versus the Zulu Ops holster which gives ample to build a proper grip for defensive use. 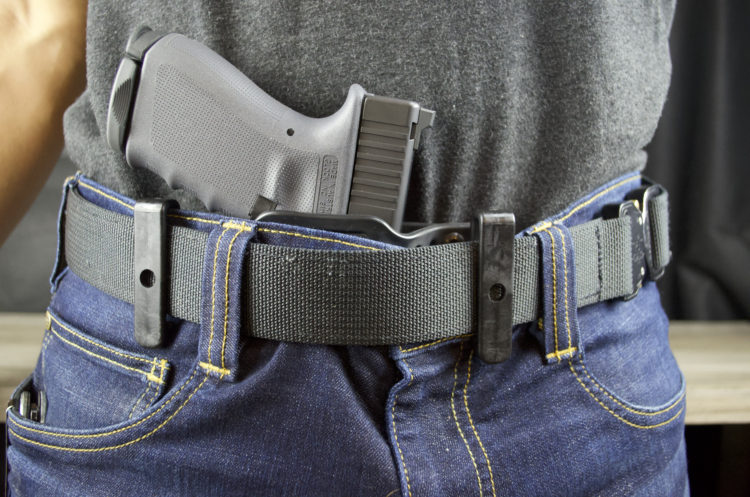 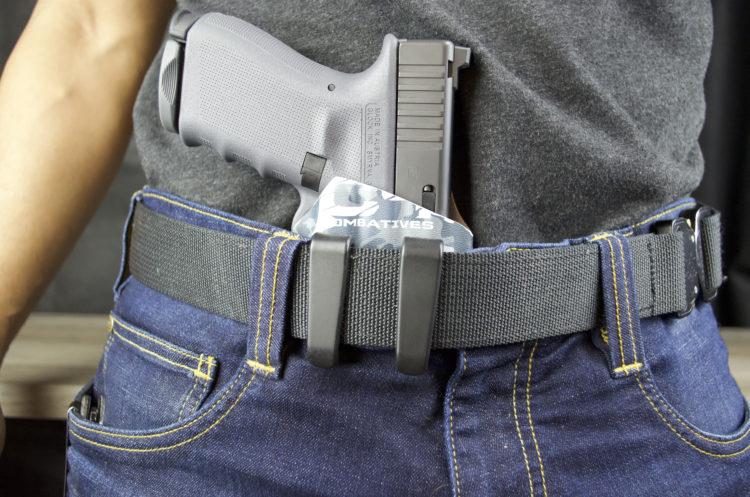 Even with this review you should test out your gear for your specific needs and applications because I am sure they will differ from mine in some way. As far as application for a defensive setting from concealment I have to give this holster a 1 out of 5.

Now as far as comfort goes it’s definitely one of the more comfortable holsters I’ve ever used. I really think they are onto something here and there is plenty of room in the market for the cross tech holster. It has a lot of appealing features it just has to compromise with having all those features so that it does not excel in any role very well.

For the price point (around $40 at the time of this review) its not a bad option, but there are better options available at slightly higher cost. As far as cost goes for all the adjustment you can do with this holster and how well your gun stays in place I have to give it a 4 out of 5.

The Cross Tech comes in at a 3/5 overall rating by at least my standards. It’s a good holster that does a lot for the money; just doesn’t do any one thing great by any means.