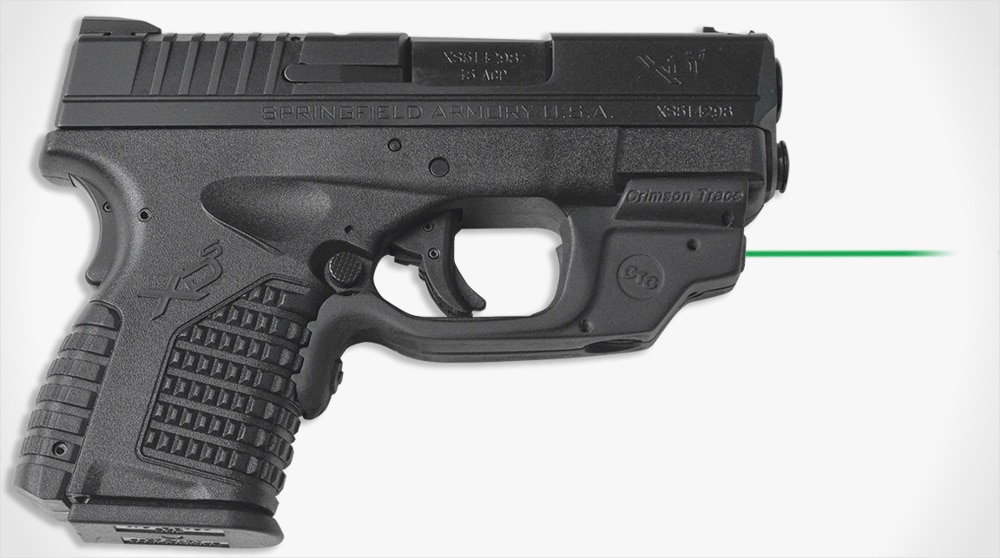 Crimson Trace is happy to announce the upcoming availability of a green light version of the Laserguard for the Springfield Armory XD-S series. The laser sight will be offered by itself or as a package with a matching pocket holster.

The company has had a red light laser module for the series for some time but the green light model offers much-improved bright light and daylight visibility, making it more capable in its primary role as a laser sight but also as a training tool at the range.

Like all Laserguard modules the LG-469G is built specifically for its host handgun. The laser sight clamps around the trigger guard and locks into place on the accessory rail. Activation is ambidextrous and natural with the activation switch right in front of the grip. To turn it on just grab the gun and squeeze.

There are a couple of trade-offs for the brighter laser, one is shorter battery life and the other is increased cost. But in this case the LG-469G is moderately-priced with an MSRP of $299 for the standalone sight and $309 for the package including the holster. As always, real-world prices are expected to be less than the suggested retail price.

The laser sight is powered by one 1/3N 3V lithium cell that provides at least two hours’ run time when used intermittently. The sight adds less than an ounce of weight which will be hard to notice on the solid XD-S.

If you like the idea of adding a laser sight to your XD-S but want to save a little money, the red light Laserguard runs a bit less with an MSRP of $229 and $239 packaged with the pocket holster.