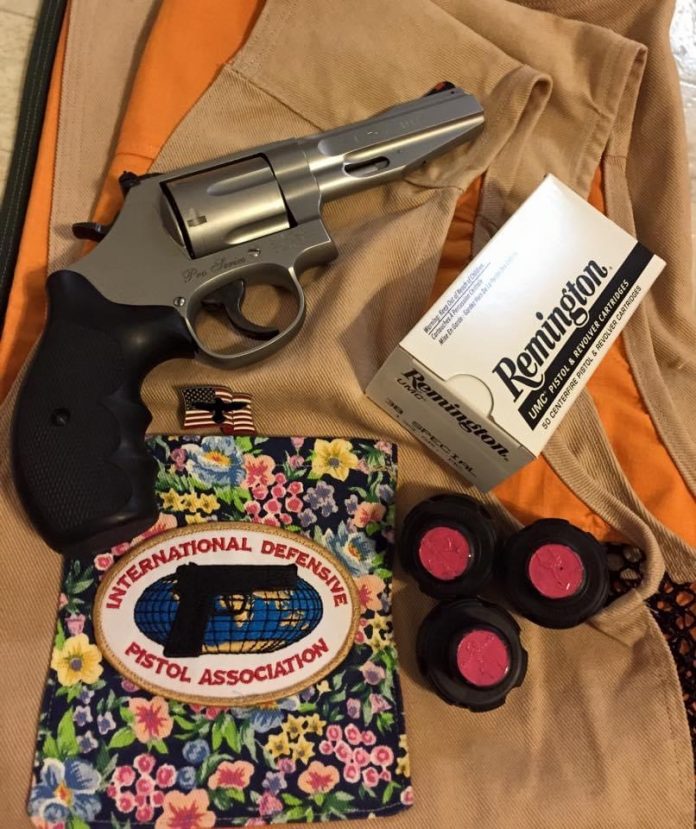 The Book of Faces recently reminded me that it has been six years since I decided to try shooting IDPA with a revolver instead of a semi-auto.

Like most of the new things I decide to learn, revolver was a progression, rather than a wild hair.

It started with a ladies 3-Gun match several years ago. The stage had a bonus points “stage gun” which happened to be a revolver. The stage began with the shooter seated inside an old minivan, pistol holstered on the belt with rifle and shotgun staged elsewhere out of reach. At the signal the shooter was required to grab the previously staged and loaded revolver out of a bucket in the minivan, engage a target positioned outside one of the open windows, then return the revolver to the bucket and complete the rest of the stage.

I had never handled a revolver before in my life. But I completed the drill without incident and proceeded with the remainder of the stage.

If you want to watch that stage, here is a video. You’ll see the staged revolver in the very beginning, inside the car. This is a screen shot.

At that time I was also signed up for IDPA BUG Nationals, during which I planned to shoot my Glock 42. But that previous match experience made me fear that I might encounter another staged revolver, so I decided to ask for help.

I consulted with a friend from my local gun club. He happened to be a retired police officer who also happened to have been department armorer in the days BEFORE they switched over from revolver to Glock. He graciously met me a few times at the range with a few of his old reliable wheelguns to give me a couple blocks of instruction.

That was a fascinating bit of experience. Although there was a trigger pull and a bang, the rest of the handling required new motor skills. The trigger pull was longer and stiffer, but with hammer back you could do more precision work. The reloading required the opposite hand from what I was used to and yet more motor skills.

A few weeks after these introductory meet-ups I happened to spy a used revolver in the case at my local gun shop while I was looking for something else. After a flurry of texts back and forth with my friend, I walked out of the shop with a new-to-me S&W 686SSR!

As things went along in my learning curve that same friend coached me through swapping out the grip on the gun and also texted me through installing a fiber optic front sight.

I finally decided to try shooting my new learning project in IDPA. But that meant I needed a new holster and more reloaders and belt holders to carry them in. Fortunately I had a discount card from Safariland and put it to good use.

Participating in shooting sports with a revolver is not just about the bang, it’s mostly about the brain. It’s also about accuracy and making every shot count. Unlike the semiauto guys who had eight or ten rounds in each magazine to take those IDPA targets down – I had six. There was no room for making up a bad shot and there is no “fast reload” with a revolver – unless your name is Jerry Miculek that is.

Revolver reloads are much slower and more awkward than with a semiauto. That meant that IDPA “tactical” reloads were exceptionally painful due to needing to catch the unspent rounds in your other hand and pocket them, rather than just retaining a partial magazine.

The really big brain-stretcher for me was needing to calculate round counts and targets in multiples of six rather than ten. It became especially important if there were disappearing targets involved. For instance, if my sixth round  was expended in dropping falling steel – which activated a moving target which would be hidden by the end of its path – then a reload would waste enough time that I would not be able to engage the mover before it disappeared. That would cost me points. So I had to figure out another way within the rules to make sure I had expended six rounds and was reloaded BEFORE activating that steel.

Bear in mind that I was never “good” at this, and I never tried it beyond my local club matches. But I was safe and accurate and I had a good fun brain strain with friends in the fresh air. After a couple seasons there were a handful of other guys at the club who decided to try their wheelguns for matches too. They apparently saw that I was having fun and stretching my skills rather than concentrating solely on my time and score. Who knew that I could be an “ambassador”?

Granted, I’ll never earn any prizes for my “just learn and have fun” attitude, but that’s the way I’m wired. I admire those who win matches while using revolvers, but I accept that I will never be among them. It is enough for me to challenge myself and learn something in the process.

It’s been a couple of years since then. Last year’s club competition was a lost cause due to the pandemic and the prior couple years had me mostly sidelined from matches due to hand/wrist issues and surgery. But this year I’m feeling pretty good and hopefully can get back out there with my pet revolver. I’ve got a carefully hoarded sash of .38 special and  I’m looking forward to “counting by sixes” again!