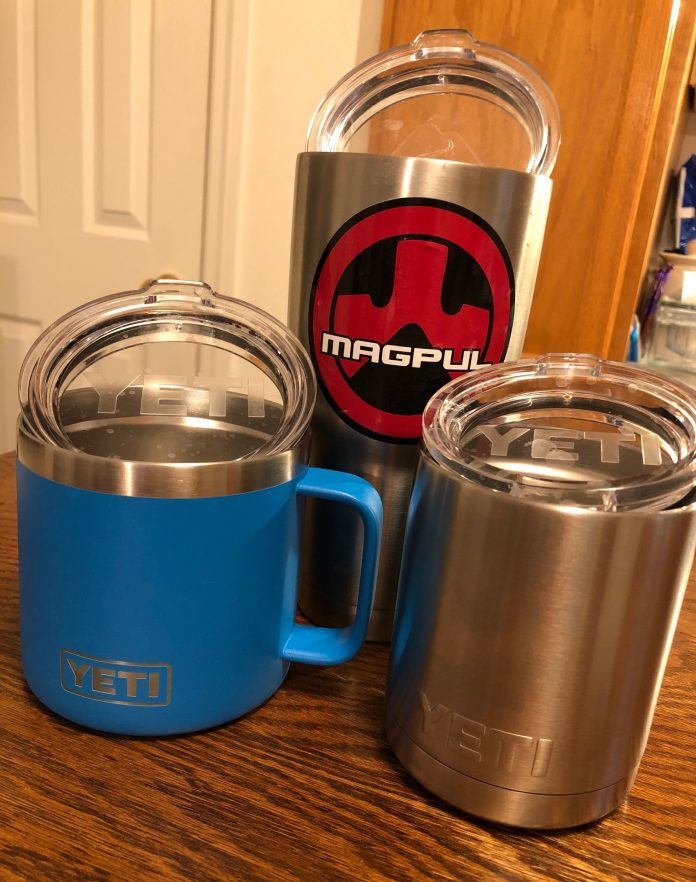 In the ongoing battle of political righteousness versus lawful commerce, the virtue-signaling drama award for the week goes to… YETI and the NRA.

The NRA claimed that YETI cancelled their relationship and prior orders and called YETI’s behavior “unsportsmanlike”. Then YETI claimed that the NRA report was inaccurate, and they were simply realigning their programs, or somesuch.

One is left to think that though the NRA’s reaction might have been a tad too dramatic, YETI’s response was merely trying to damage-control their way out of a tight spot. NRA has now produced a counter-response, and there has been quite a bit of resultant social media drama. In the end, firearms owners and their wallets will make the final decision.

I personally think YETI will come out the ultimate loser, but I do not have a dog in this fight. I appreciated my freebie YETI cups that I got at SHOT range day the past two years, but the only insulated cup I’ve bought with my own cash was a Walmart knock-off for the happy-face price of ten bucks. Heck, I’m still using a cooler that was in my parent’s basement when my mother moved to a retirement home. I’m that cheap. Some people might be willing to sacrifice a car payment to keep their beer cold for an entire week, but I would not be one of them.

There are those though, who seem to be going overboard about this. NRA supporters have been shooting up their YETI coolers online, and there is video of some being literally BLOWN up. That seems a bit extreme to me. The adage about cutting off one’s nose to spite one’s face comes to mind. I also think that such a petulant display merely gives liberals more fodder for painting gun owners as unhinged nut jobs.

With that said, given the amount of calumny that gun owners in general and the NRA in particular have been subjected to lately, I really can’t blame them for an over-the-top response to this latest kerfluffle. If they want to shoot up their own personal property which they spent hundreds of dollars on, that is their prerogative. However, I think covering up the YETI logo with an NRA sticker or three would be a wiser move.

Orca and Pelican coolers have both since entered the fray by offering statements of 2A support and even discounts for their products, or NRA donations for a purchase. This seems to me to be a more positive and “yay capitalism” type of response.

Despite the uproar, YETI is only the most recent liberal-leaning company to jump on the Condemnation-By-Commerce bandwagon. Other companies have led the charge – REI comes to mind, as does Delta Airlines and Citibank. There was even a derisive piece in the New Yorker recently, sneering at the appearance of Chick-Fil-A restaurants in liberal elite New York City.

Ain’t freedom grand though? I can spend my money wherever I wish – and so can they. But eventually virtue-boycotts lead to counter-boycotts, and pretty soon I’m going to need a computer algorithm to decide where to shop. I can’t even just punt and buy an Ozark Trail cooler from Walmart, because didn’t Walmart stop selling ARs the other year, and recently restrict ammo sales to those under 21?

There comes a point where it all just seems silly. I can have friends of different religions (and the 2A IS a religion to me), so why can’t I do business with companies that have different views than mine? Does every purchase have to be a political statement? Isn’t there a certain point where it’s JUST a chicken sandwich?

I for one, am putting my foot down. If someone offers me a drink after a long hot day at a match after the guns are put away, I am certainly NOT going to refuse a free beer just because it came out of a YETI cooler. In my mind that would truly be … unsportsmanlike.