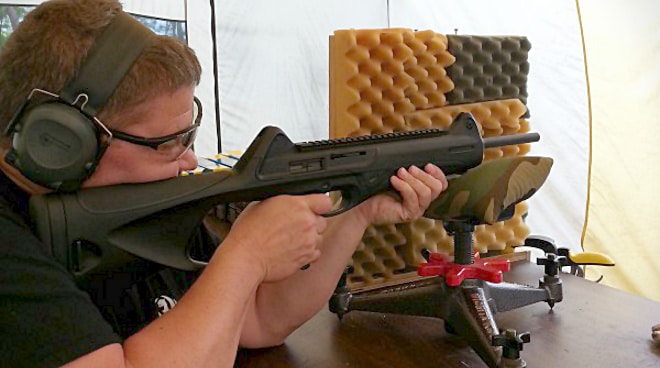 Not too long ago the Ballistics by the Inch team published their findings with handguns loaded to the top with hard-hitting .45 Super and 450 SMC loads. Their data was impressive — magnum revolver performance out of semi-automatic handguns.

If you’re unfamiliar with .45 Super and 45o SMC they’re two cartridges that are externally similar to .45 ACP but use reinforced cases loaded to the rim with powder. They can be fired out of many guns chambered for .45 ACP without modification, except for maybe heavier recoil springs.

To find out more about the hows and whys of .45 Super and 450 SMC check out our earlier write-up on these screaming-fast loads. How fast? We’re talking about double the energy at the muzzle of standard-pressure .45 ACP or more — with muzzle velocities well over 1,300 feet per second, and that’s with 185-grain hollow points.

As you can imagine, the performance out of a carbine — a Beretta CX4 with a 16.6-inch barrel — was also impressive. To determine a base level of performance, the crew started with regular old 230-grain ball ammo.

Although the ball ammo did do significantly better out of the longer barrel, leaving the muzzle at 900 feet per secon, that translates to less than 450 foot-pounds of force. For reference, out of a full-size pistol it leave at about 800 feet per second making about 350 foot-pounds. That’s still around a 30 percent increase in energy at the muzzle and worth noting.

Out of a carbine .45 Super and SMC show even more significant gains. Loads in excess of 660 foot-pounds out of full-size handguns were producing muzzle energies in excess of 990 foot-pounds of force, a tidy 50 percent more power. That’s just a little more than a standard .30 Carbine load.

During handgun testing the most powerful round they found was a 450 SMC load by Double Tap, the jacketed hollow point. That generated 749 foot-pounds of force when fired from a Glock 21 with an extended barrel. The carbine-length barrel added another 300 feet per second to it at the muzzle, moving the 185-grain at 1,618, generating 1,075 foot-pounds of energy at the muzzle. To further put things into perspective, 5.56 NATO makes about 1,300 foot-pounds of force.

The performance of these rounds indicates that they should be considered a do-all caliber, absolutely suitable for self-defense and capable of taking medium game. And while recoil is stout fired from handguns, the cartridges were easy to shoot out of the carbine.

“A heavy, large projectile hitting with 900 to 1,000 foot-pounds of energy is nothing to sneeze at. Particularly when it comes with very little felt recoil out of this little carbine,” said Ballistics by the Inch frontman Jim Downey. “That means you can get quick and accurate follow-up shots, which is always an advantage when hunting or using a gun for self and home defense.”

These results frame .45 Super and 450 SMC in a very rosy light. Hopefully this will lead to more companies to load rounds for it, lifting out of niche territory to at the very least boutique market.

In a perfect world, one or both of these cartridges would be SAAMI-specced with all the big makers rolling these hot .45-caliber cartridges, but before that can happen, people’s interest needs to be piqued. If these tests prove anything, it’s that these cartridges are unquestionably interesting.