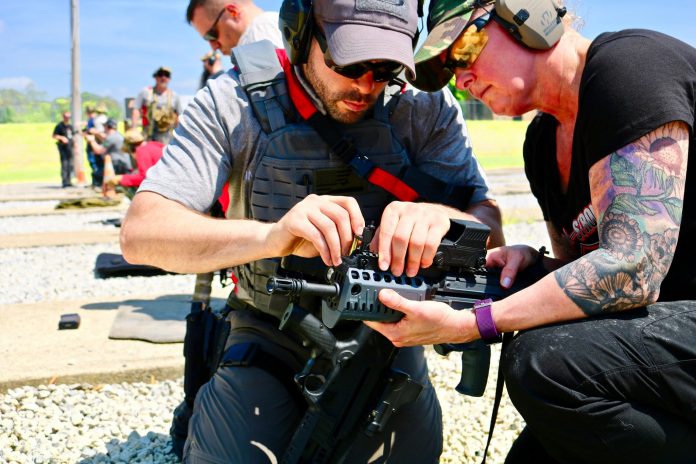 What it our training responsibility? How many courses are enough? What level of course work covers what we need to know?

The answer is ludicrously simple.

Continuity of training is imperative to continue the learning process and keep fresh on a skillset. Taking a course over again, especially one that you enjoyed, is easily among the best ways to accomplish that.

“No two courses are the same.” – Tom Alibrando

I recently attended IWI’s Tavor Operator I, the same course I took and reviewed last year. I went back to bullpup school basics.

I also didn’t bring a bullpup.

I have attended four Tavor/X95 courses and still do not technically own the rifle. I have purchased the rifle, I ordered the variant as soon as it was announced. However, thanks to a series of unfortunate acts (the NFA and government shutdown) my lawfully purchased property is not mine yet.

That’s not our topic though.

The purpose of training cycle continuity

Continuity in training is about immersion. If we keep jumping in the pool to swim laps regularly, even at the shallow end, we don’t lose all the little microefficincies and gains that we make when we take developmental classes. Taking T1 again was a no brainer. You catch up with friends, you meet new ones, and you shoot guns in a structured learning environment. Also really cool guns usually make an appearance… #FullAuto

When you’ve taken time off from a skill set you do not go right to the hardest tasks you spun up to complete at the peak of your last training cycle. You worked to get there and you will need to work back to get there again. LEO and Military units do the same thing, they work up for a mission or deployment from the base tasks to the final mission requirements. When they go home, relax, complete other work and then get tasked with a new mission they spin up the training cycle again from the ground up.

You’ll see that in these courses too, as the student body reaches standards they move forward. Starting from the fundamental base means nobody gets left out to rot in confusion because something was skipped and they went too far too fast.

Picking up a class taken previously is illustrative, the most notable item is how much you forget. The fundamentals are an immersion skillset and they will slip when you stop practicing regularly (and you will). Putting yourself into that student learning environment, where you aren’t driving your own practice schedule, checks your homework as it were. Objective standards of performance graded by a third party who is there to help you improve.

Taking a course again is like rewatching a good movie, you lock onto your favorite spots and you pick up on some of the little items you missed. Often there are new anecdotes for teaching, new things learned since last class, and new experiences to apply.

No two classes are the same. Learning how to fight the gun better than last time and checking those standards again to see where you’re at.

The full course curriculum: 1, 2, 3, & new this year TNOC (which you can sign up for after completing T1, I am heading there) is developing the shooters ability to use a rifle as an individual in a gunfight. Citizen, Cop, Marine or Soldier, Mom or Dad, those roles are on equal footing in the course design. The individual running the rifle is protecting their life, the focal point of the whole system and the perspective being learned from.

It’s my sincerely held opinion that, in addition to far too little range time, the military and LEO organizations move towards team tactics far earlier than they should before competence on the weapon as an individual is reached. They assume, wrongly, that adding the new tactics, techniques, and procedures into the mix also somehow redundantly practices the basic fundamentals.

I honestly wish more courses were taught on IWI Academy’s format. Any rifle, handgun, shotgun, or long gun/handgun system benefits from the format. The course is on the X95 but my proficiency on my Galil was the developing skillset.

Enhancing the total student comprehension of the rifle system. The individual can actually fight the gun because they know what is happening and can figure out what has gone wrong if the rifle stops. Instead of just parroting motions and punching paper or ringing steel, the whole system makes sense to the system operator.

It’s a chronic problem within military and law enforcement circles, parroting in place of comprehension. Continuity of training drastically increases the comprehension and eliminates the parroting. By regularly entering the learning circles we recheck the skills we know but haven’t touched in a minute.

What are those basic concepts that you haven’t checked off in awhile?

When was the last time you zeroed? Actually zeroed and confirmed at distance? A good basics course will get you back on the gun and on target, checking all the things we simply tend to assume are on and “close enough”.

“Close enough” starts falling apart as soon as 50 yards. It tells no lies by 100 yards. Go zero your rifle if its been minute.

The quick zero I had prior to class, shot with about 15 rounds at 50 yards and declared good enough, was not. When starting the process anew it was fine at 25, as expected, but we adjusted for a theoretical 100. At 50 I adjusted again for a windage correction and when confirming it was dead on center mass at 100. Distance tells, check it.

Even just the proper mechanics of loading. All the little steps to get it right and check that your weapon is up and running. Errors were made. Errors were corrected. The learning environment exists to comprehend the machine, it’s mechanics, it’s possible faults and how to correct them.

Do you remember how the gun feels when it goes to bolt lock? How does an empty chamber or misfire sound and feel? How does the dead trigger of a “Type 2” or “Hard” malfunction (double feed, usually) feel?

The most common bubble I saw busted was actually “I’m going to run the gun dry and see how it does.” That was an easy test. The guns got hot, the guns got dirty, the guns had stoppages a few hundred rounds in. The hot dirty guns that were running lubricant didn’t have stoppages. Lube the bolt carrier = Fewer problems.

So what’s your plan for Continuity of Training?

The curriculum for T1 wasn’t altered, the instructors were different so the experience was different. Every time I attend a course I can see how I’ve improved and where I need to improve. I dust off skills, sometimes years untouched, and I develop new ones from good instructors and students.

I don’t run my M16 like I did as young Marine in 2007. It’s faster now, more efficient, with many lessons learned and a better ancillary gear list. It’s still ultimately the same rifle. The foundations of that Marine are still there. But I am a vastly superior shooter now compared to then and it is all thanks to guys like Tom, Yossi, and Steve running courses to provide that continuity.

If you haven’t started now is the time.

Find a course. IWI Academy comes highly recommended. I’ll be back with them and Sentinel Concepts in a few weeks.

Oh… and readers. It’s pretty much a vacation all about guns too, so go have some fun already. This is the best money you can spend on guns and gear.