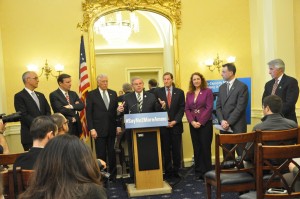 Ranking Democrats on Capitol Hill, along with gun control advocates from the Newtown Alliance, pledged to renew a federal prohibition on magazines that hold more than ten rounds of ammunition.

The legislation, to be introduced this week to both chambers Congress, aims to once again ban the importation, sale, manufacture, transfer, or possession of so-called large capacity magazines.

“There is no place in our communities for ammunition magazines designed for military-style shootouts, which have been used inside Sandy Hook Elementary School, in Aurora, in Fort Hood, and in Tucson – and it is well-past time for Congress to listen to the American people and put this high-capacity magazine ban back in place,” said Sen. Bob Menendez, D-New Jersey, sponsor of the legislation, in an official statement.

The proposed measure would reinstate a portion of the decade-long Federal Assault Weapons Ban, which expired in 2004. That ban’s legacy has been upheld as a success by lawmakers who championed it while most criminologists point out that its effect on crime was negligible.

The bill, officially termed the Large Capacity Ammunition Feeding Device Act, uses expansive language to deem almost all conventional magazines that can accept more than 10 cartridges illegal. This would include not only traditional box magazines, but also any, “belt, drum, helical feeding device, or similar…” than can be converted or made to accept more than the allowed round limit. A host of exceptions for the military, law enforcement, and nuclear power plant security guards among others are included. The only type of firearm excluded from the ban would be .22LR caliber rifles with tubular magazines.

Feeding devices made before the ban is implemented would be grandfathered and those made after the law takes effect would be marked and dated.

The bill also authorizes federal Byrne Justice Assistance Grant Program funds to be used for buyback programs to then remove grandfathered magazines out of circulation.

Members of the Newtown Alliance were on tap at the press conference to debut the legislation, as was both sides of Connecticut’s Senate delegation, senators Richard Blumenthal and Chris Murphy, both Democrats. Members from the House included representatives Diana DeGette, D-Colorado, Ted Deutch, D-Florida, and House Democratic Whip Steny Hoyer, D-Maryland.

“During the dark day of Dec. 14, 2012, 11 innocent children escaped the ravages of gun shots at Sandy Hook Elementary School because shooter Adam Lanza had to pause to reload his gun,” said Dave Stowe, vice chairman of the Newtown Action Alliance. “Large capacity magazines that allow people to shoot up to 100 rounds of ammunition have no place in our schools, our movie theaters, our parks, or our streets.”

Firearms industry insiders feel that this renewed call for legislation that was never proved effective is ill fated in a Republican-led Congress.

“We had a federal ban for 10 years and the evidence shows it did nothing to reduce crime,” Larry Keane, general counsel for the National Shooting Sports Foundation told Guns.com. “The last Congress rejected similar legislation. We see nothing to indicate this Congress, which is even more pro-gun, would consider this highly partisan anti-gun bill.”

“The gun prohibition wing of the Democratic Party will keep trying to ban anything and everything they think they can get away with,” Alan Gottlieb, president of the Citizens Committee for the Right to Keep and Bear Arms told Guns.com. “Thanks to the voters in the last election this standard capacity magazine ban will go nowhere. They even have the gaul to call this ‘gun safety’ legislation when we all know it is gun control with a capital G.”