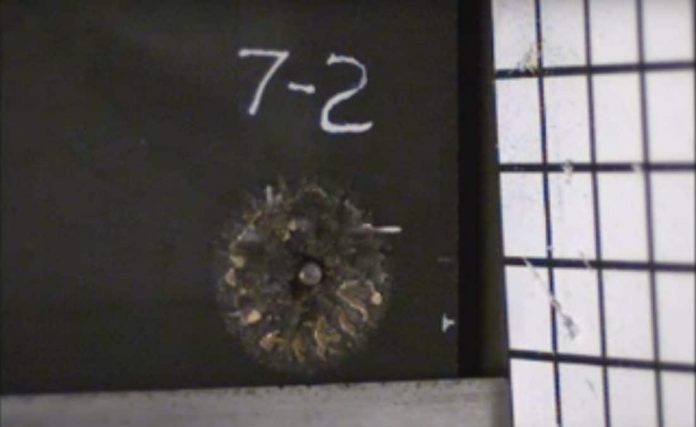 A professor at North Carolina State has created a sandwich of an experimental armor that uses composite metal foam (CMF) as a shock absorber whose results have to be seen to be believed.

As reported by NC State, his team was able to put the breaks on a .30-06 AP round, shown in the video above, like it was a water balloon.

“We could stop the bullet at a total thickness of less than an inch, while the indentation on the back was less than 8 millimeters,” Rabiei says. “To put that in context, the NIJ standard allows up to 44 millimeters indentation in the back of an armor.”

According to the abstract from the paper on the experiment, a 25mm (1-inch) thick layer of armor that uses boron carbide ceramics in the front as a strike plate, composite metal foam as an absorber, and kevlar panels as a backplate stopped  7.62×51 mm M80 NATO and 30.06 M2 armor piercing rounds while (and here is the important part) it absorbed, “approximately 60–70 percent of the total kinetic energy of the projectile.”

This is not your grandpa’s armor.