“THERE’S A FREAKIN’ FENCE OUT THERE. A CHAIN-LINK FENCE!” came the holler from our man in the doorway of the building we were in. That fence was blocking our route to a field just outside, to where our exfiltration help was already inbound. I already knew what was coming next as the assault team leader looked at me. I nodded and started for the door when he called out, “Geo, cut it!” I was carrying what we called a Python Charge or Fence-Cutter. It was really just a great general-purpose explosive charge, powerful as hell, and was a shaped charge, meaning it was a wicked cutting charge that focused all of its burn energy in a concentrated direction. It could cut through all kinds of metal and was perfect for blasting through a chain-link fence. In fact, the measurements of the charge were approximately eight feet long—specifically designed with a fence in mind.

The Python was a linear-shaped charge (LSC) embedded in a long foam strip with a heavy rubber band on top and a wire hook on the bottom. I carried it on my kit, rolled up into a flat disk. I dashed outside with a man covering me as I worked. I whipped the Python to unroll it. I hooked the rubber retainer over the top wires of the fence, and pulling it taught, I hooked the wire hook into a loop low on the fence.

At that moment I thought I heard Major Horton from “Band of Brothers” call out to me, “WHAT IS THE GODDAMNED PROBLEM, MR. SOBEL?”

To which I would reply, “A FENCE, SIR… A… A CHAIN-LINK FENCE!

The tension of the rubber band helped greatly to slap the Python up against the fence. I did a final check to make sure the Python was facing the right way, because that would certainly suck when I fired it from a few feet away if it were facing me rather than the fence. I grabbed the firing system, an M-60 Fuse Igniter attached to a Nonel shock tube detonator.

Three seconds was all the delay I had programmed into the firing system. I popped the M-60, announced “BURNING!,” took one large step behind the python, and squatted with my back to the charge and fingers in my ears like a little kid lighting a Black Cat firecracker. I could hear the thump thump thump of Black Hawk helicopter blades approaching when the Python let off an ear-splitting CRACK and a wicked-rude shockwave that pushed me forward onto my hands.

Positive that the sneaky rat bastard Mike Tyson had snaked up and clocked me a good one, I twisted back and gave a gander at the fence. What fence? It was blown open from north to south. You could have driven a Ford Fusion through it without scratching the paint…not that it would have been a big deal with a Ford Fusion. I mean come on. OK, a Lamborghini, then. You could have driven a Lamborghini untouched through the hole the Python left in that fence!

I crouched by the opening, letting my team pass through to the exfil chopper. Each man gave me a “good job” slap to the shoulder as they ran by. A litter team jogged by with the asshat terrorist we had come to remove from leadership. He was strapped down tight, all beat the hell up, and looking totally disenchanted with his current state of affairs. Plus, he had crapped his pants. Every person we ever nabbed crapped their pants. Even general officers. They all crapped their pants.

“Last man!” I was told by the last assaulter to run by. My turn. I raced off to take a seat on the helo. I thanked the creator that we had a decently short flight, because even in a banshee-howling Black Hawk with both the doors removed, I could still smell that clown’s shit pants from where he lay strapped to the litter. I had to grin.

That was a good time. Everything went well—very well. To flip that coin, though, we all know that some of our best-laid plans may take a southern excursion of their own at times. Such was the case with Moses Bentley and the Bentley Blaster (BB) charge he had created on his own.

The BB charge was, in my opinion, more of what we called a “trash shot.” That is, it was just a wad of all of the explosive tailings, odds and ends, left over from making explosive charges. Pieces that wouldn’t really fit into another charge. We would typically take the trash shots downrange and blow them up once a month. I have used the term trash shot to describe a good number of people in my day, too. Perhaps some have used it to describe me?

The next mission called for explosive entry through an exterior door. Think of the front door to your house. It is probably the most no-nonsense, strongest door in your house. All interior doors are likely much lighter and weaker. Moses was the breacher for this target. He was hell-bent on using his BB charge, and use it he did.

We two, Moses and I, crept to the front door while the rest of the team stacked up just around the near corner. I had Moses’ back while he worked, just like my mate had my back at the Python. Moses fired the charge but did an odd thing: Rather than back away from the charge, he turned around quickly and ran around the corner.

The delay on the firing system was five seconds. I cleared the corner with the team as the charge detonated. MY GOD…it was so loud! I thought. I was stunned and flipped around 180 degrees. My ears rang like the Notre Dame Cathedral, and I wasn’t completely clear what I was even doing or even where I was.

An assault team in a stack just around the nearest corner from the blast of the breach point.

As colors slowly returned to my sight I could see now that the front door had not blown up. We had blown up. When Moses turned after firing the charge, his holstered M1911 had hooked the charge, stripping it off the door, dragged it back to the assault team stack, and…BOOOOM!

Moses was upside down, with his body slumped against the wall and his head anchored into the ground, neck bent at an impossible angle. You simply could never have manually placed a human in such a bizarre and morbid pose. Well, maybe if you were Jeffrey Dahmer.

The man behind Moses lay face down with his uniform trousers completely shredded, his bare legs bleeding from a hundred tiny holes. He was getting up slowly. I ran to him and grabbed his shoulder. He looked up at me with a horrified expression.

“Cos!” I said his name. His face changed completely and he grinned and shook his head a bit, exclaiming, “Whew…I’d hate to see what that door looks like now. WHEW!”

Moses had just come-to from his upside-down unconscious state and immediately got into a pissing match with our team leader, Daddy-Mac. “Well, Mos is OK. That’s what he normally does: argue!” Mos would be fine, but he was certainly NOT fine. He was badly burned, with black and red on his pelvis and legs. Some flesh was blown away and he had holes in both legs. His sidearm was destroyed and likely saved his life.

I could see his junk—which was completely disgusting—where his kit and clothes were blown away, and I was vicariously glad for him that he was still intact. He was out of action for weeks but came in occasionally to argue, because that’s what Mos did: argue.

An in-house investigation performed by The Unit’s master breacher gigged Mos for two faults: The first was the unauthorized use of a non-standard explosive charge, the Bentley Blaster; the second was his failure to follow egress procedure after firing the charge. Remember, he turned 180 degrees and hooked the charge with his pistol. If he had just backed away from the charge once he’d fired it, none of the carnage would have occurred.

The Unit could have let him go for that but didn’t. I’m thankful for that. Mos took his medicine from the master breacher like a man, but only after one hell of a long, drawn-out argument with the guy. Because that’s just what Master Sergeant Moses Bentley did. He argued.

From a cartoon book maintained by the author depicting various events in a humorous manner. Depicted here is Moses Bentley himself acting as the explosive door charge. 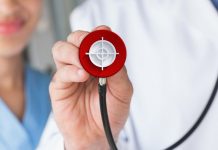 Your Doctor and Your Guns