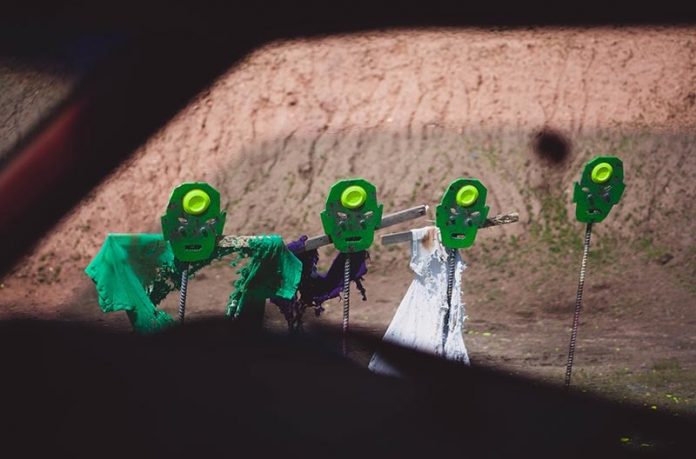 3-Gun shooters took to the range to destroy hordes of zombies at the Heartland Public Shooting Park in Grand Island, Nebraska as part of the annual Zombies in the Heartland match.

Hosted by Hornady, the Zombies in the Heartland match kicked off May 31 spanning the weekend and ending on June 2, 2019. The match brought together 3-Gun competitors and zombie fans alike to try their hand at unique and innovative stages. Shooters progressed through each stage which offered a different task or challenge and of course some zombies in need of headshots.

Match Director Jeremy Millard said that part of the draw of the event is its fresh and exciting course design.

“I’ve shot a few matches across the country I’ve never seen anything like this. So that’s what we want to bring to this match — stuff you don’t see in standard pistol matches and 3-Gun matches that is new and exciting stuff built around movies that you’re familiar with,” Millard explained to Guns.com. “Every year we sit down and have a planning committee that talks through the stages. People watch a few zombie movies and we’ve got some references to the Walking Dead and Zombieland. People take some inspiration from that.”

In its 8th year, the annual event arose from Hornady CEO Steve Hornady’s affinity for all things zombie. An avid fan of the genre, Hornady was approached and asked if his company would be willing to sponsor the event.

“There are numerous reasons we decided to do this but ultimately it came down to Steve. He is a fan of zombies — the whole thing, the history, the movies, shows, books,” Emery said. “We’ve debated changing themes over the years but the people still want this. They like it. It’s something different. It’s a fun match, great for beginners or pros.” Shooters must engage targets through the trees in this stage.(Photo: Jacki Billings/Guns.com)

From there, the event took off. Competition shooters from all over the world, including professional shooters like Jerry Miculek, Dianna Muller, Ryan Muller, Lance Dingler and David Smith, rallied beside hobby shooters to work through the courses of fire.

In one stage, shooters tackled zombies on the simulated open seas being careful not to accidentally hit neighboring good guys in a rescue boat. In another event, competitors were out of fuel and must engage zombie targets before grabbing a gas can, running to a new shooting bay and engaging multiple targets there. All in all, the event was a major success with over 175,000 rounds fired during the three days and 406 total shooters participating in the zombie fun. Competition shooter Ryan Muller runs a gas can to another bay to refuel before the horde takes him. (Photo: Jacki Billings/Guns.com) 3-Gun celebrity Dianna Muller takes on zombies in the sea with her pistol. (Photo: Jacki Billings/Guns.com) David Smith, aka Shakey Dave, gets in some headshots. (Photo: Jacki Billings/Guns.com) Competitors were on a race against zombie-infested waters. (Photo: Jacki Billings/Guns.com) Zombies lurked at the lake in this stage. (Photo: Jacki Billings/Guns.com)