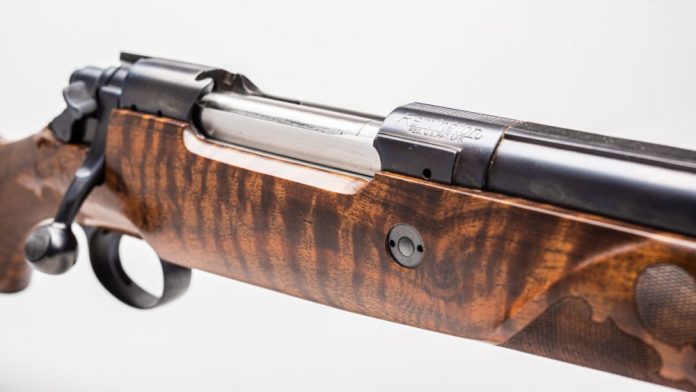 Frank A. Pachmayr (1906-1997) was described as “America’s Master Gunsmith” and this custom rifle from his shop can attest to that. (All Photos: Guns.com)

For over 50 years, California’s Frank Pachmayr turned out high-quality custom rifles with Old World craftsmanship. This is one of his beauties.

Frank learned his trade at the hands of his gunsmith father, German immigrant Gus Pachmayr, and young Frank reportedly learned to turn barrels by the ripe old age of eight. By age 22, in December 1929, the junior Pachmayr struck out and founded his own shop. For over a half-century, Pachmayr Gun Works, or PGW, would remain on 1220 S Grand Ave in Los Angeles where rifled actions would be mated with finely figured walnut stocks, then tuned to the customer’s specifications or choice of caliber, and a finished, custom gun delivered to spec. He also became one of the first to transform the GI M1911 .45 ACP into the popular combat/competition gun seen in the late 1970s, in short, tactical/practical before it was called that.

In time, Pachmayr invented dozens of accessories that are still standard in the firearms community today, including a host of recoil pads and handgun grips, optics mounts, and detachable sling swivels.

With that as a backgrounder, let us take a look at an exquisite Pachmayr-made rifle currently in the Guns.com Vault of Certified Used firearms. The Model 30, which was produced commercially from 1926 through 1940, was based on the Enfield M1917, which Remington made in large quantities for the U.S. Army in the Great War. The “American Enfield” was renowned for having a strong receiver. The 30-S Express was a more deluxe version The serial number on the receiver puts this Model 30’s date of original production from Remington as about 1938. The bolt is serial-numbered to the rifle The rear rifle sights have a flip-up 150-yard leaf… The pistol grip is inlaid, “Donated by Nanitta & Frank Pachmayr,” pointing to the gun as being likely a donation piece for a club or museum. Whereas stock Model 30-S Expresses used a 22-inch barrel, this Pachmayr example has a barrel that runs 25.5-inches in length. Weight is about 10.6-pounds. The high-grade rubbed walnut stock includes an ebony forend and extensive checkering. There is no provision for a scope The .458 has a three-round internal box magazine.

Sadly, Frank passed in 1997, aged 90, and is buried in Inglewood. For the past two decades, Pachmayr accessories have been under the Lyman banner. Today, 1220 S Grand Ave is a condo complex.

Nonetheless, relics of the good old days of PGW, such as this Model 30, still endure for the next generation.

ADD THIS BEAUTY TO YOUR COLLECTION

If you love interesting, unusual or just downright beautiful firearms that are outside of the ordinary like this Frank Pachmayr custom rifle, head on over to Guns.com Collector’s Corner, where you never know what you are going to find. History is just one click away.