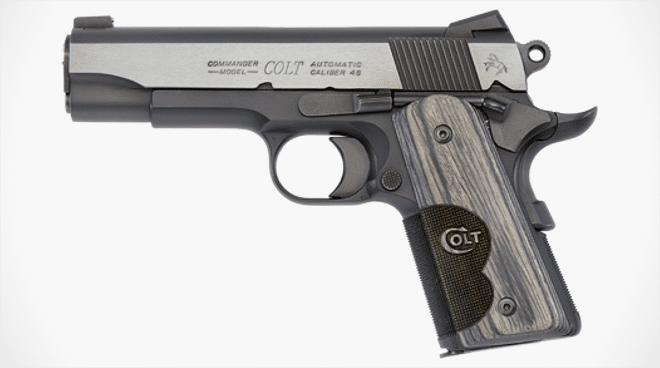 Colt is gearing up for another run of the special-edition Wiley Clapp Concealed Carry Officer’s model 1911. This compact 1911 was built around Clapp’s mantra, “Everything you need, nothing you don’t.”

It’s a Series 70 pistol chambered for .45 ACP with a light alloy frame based on the original Colt Officer’s ACP, but with a longer 4.25-inch National Match barrel and other upgrades that make it a standout .45 for concealed-carry.

The carbon steel slide is cut for Novak sights and comes with a brass bead front sight and low-mount wide notch rear sight. While tritium night sights are popular with the concealed-carry crowd brass beads pick up light even in low-light conditions and will never fade and need replacing.

The trigger guard is undercut for a higher grip on the frame that lets most people get a full-handed grip on the short frame. This combined with the high grip and extended beavertail help keep recoil to a minimum even with the light frame, which has 25 line-per-inch checkering on the frontstrap for a positive grip. The checkering is performed by renown metalsmith Pete Single.

The Wiley Clapp CCO weighs 28 ounces unloaded making it perfect for all-day carry. About the only downside are the right-handed controls, but for right-handed shooters that means a slick side for a snag-free draw.

The pistol does have an extended beavertail grip safety with a memory button, and it sports a set of modified Altamont “finger print” Tactical Oval grips that have been re-designed to suit the short grip. The frame is rail-free to keep printing to a minimum.

The Wiley Clapp CCO has a recommended retail price of $1,159 and ships with two flush-fitting six-round magazines.