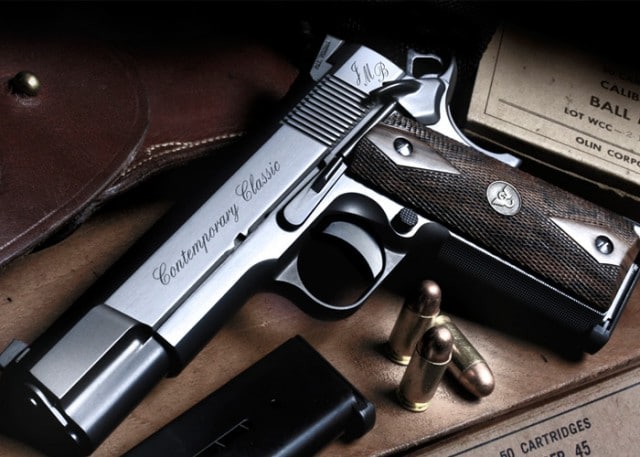 The Colt M1911 vies with the Browning HP as one of the most successful pistols designs ever produced, for it has been manufactured in millions and is in widespread service all over the  world some 90 years after it was first standardized for service in 1911.

The design had its  origins well before then, however, for the weapon was based on a Colt-Browning Model 1900 design. This weapon  was taken as the basis for a  new service pistol required by the US Army to fire a new 0.45-in (11.43-mm) cartridge deemed necessary as the then-standard caliber of 0.38 in (9.65 mm) was considered by many to be too light to stop a charging enemy. The result was a series of trials in 1907, and in 1911, the Pistol, Automatic, Caliber, 45, M1911 was accepted. Production was, at first, slow, but by 1917 was well enough under way to equip in part the rapid expansion of the US Army for its new role in France.

As the result of that battle experience, it was decided to make some production changes to the basic design, and this led to the M1911A1. The changes were not extensive, being confined to items such as the grip safety configuration, the hammers spur outline and the mainspring housing. Overall the design and operation changed  only little The basic methods of operation remained the same, and this mechanism is on of the strongest ever made. Whereas many  contemporary pistol designs employed a receiver stop to arrest the backwards progress of the receiver slide, the M1911 had a locking system that also produced a more positive stop. The barrel had lugs machined into its outer surface that fitted into corresponding lugs on the slide. When the pistol was fired the barrel and slide moved backwards a short distance with these plugs still engaged. At the end of this distance, the barrel progress was arrested by a singing link which swung round to pull the barrel lugs out of the receiver slide, which was then free to move further and so eject the spent case and restart the loading cycle. This robust system, allied with a positive applied safety and a grip safety, make the M1911 and M1911A1 very safe weapons under service conditions. But the pistol is a bit of a handful to handle and fire correctly, and a good deal of training is required to use it to full effect. The M1911 and M1911A1 were both been manufactured by numerous companies other than Colt Firearms, and have been widely copied direct in many parts of the world, now always to very high levels of manufacture. Modified  ‘fine tuned’ variant continues to serve with the US marine Corps  and with special forces units.