A 17-year-old teen won a $50,000 grant from Smart Tech Challenges Foundation — a Silicon Valley group awarding grants to private entities that improve smart gun technology — for developing a biometric sensor that would prevent unauthorized users from firing a gun.

Kai Kloepfer, a student from Boulder, Colorado, and the first person to win the award since the challenge launched in January, developed a system that grants an approved person access to a gun upon recognizing his or her fingerprint. The biometric sensor can be programmed to authorize up to 999 users and it boasts a 99.99 percent success rate — even with partial prints. 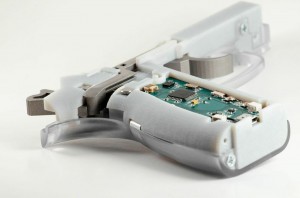 “I’ve been interested in technology for as long as I can remember,” Kloepfer told the Denver Fox affiliate.

He explained that the 2012 mass shooting at a movie theater in Aurora, which is less than an hour away from his home in Boulder, inspired him to take the challenge.

“I started thinking about the role technology could play in preventing accidents and death related to firearms. The idea actually came to me in a dream and I have been working since then to make it a reality,” he said.

Kloepfer’s award winning design was built on a budget of less than $3,000. An earlier iteration of his design received recognition at the 2013 Intel International Science and Engineering Fair, where he placed 34 out of 7 million high school students around the world.

He perfected the biometric design on a plastic model of a Beretta Px4 Storm. With the grant money, he aims to integrate his device into a live firearm.