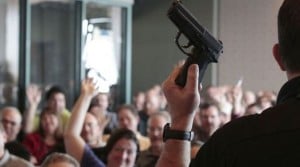 “We could certainly run and hide, and throw chairs, and do everything else that we could do, and I truly agree with that, but now I have a second option,” said Marc Rabinoff, a former educator who is now retired after 35 years. (Photo: 9 News)

As kids return to school and with safety still a concern among many teachers and other staff, one Colorado gun club is providing a service to help teachers feel a little bit safer. The Centennial Gun Club is providing a concealed carry class for any teacher in the state who signs up.

About 40 teachers have already completed the course and several more signed up at a festival hosted by the club on Saturday, local media reported. The class would normally cost $125.

However, not all teachers are allowed to carry a gun to school. The state permits each individual school district to make their own policies on whether or not to allow guns on school property. And while the majority of the state’s school districts are against it, some of the more rural districts already have teachers and other staff who carry.

“People are a little crazy. They choose gun free zones,” said Paul Stanley, operations manager for the club, which is located about 15 miles outside of Denver. “We want to be sure our children, our future, have the opportunity to be protected.”

Stanley added, “It’s horrific what’s going on out there. We want to make sure teachers at least have an opportunity to become familiarized, face some fears and become comfortable with handguns.”

Marc Rabinoff is now retired after 35 years in education. He only recently took up target practicing as a hobby, but believes guns – in the hands of the highly trained – should be allowed in schools.

“Now I would want no gun-free zones,” he told a local Fox affiliate. “That’s ridiculous.”

But with guns being such a hot button issue as of late, some educators are leery of letting their views be known.

Tara, who didn’t want her last name to be used, is a former teacher who is looking to get back into education.

“While I am a teacher, those kids, those students in my class are my kids, and my first responsibility is to protect them at all costs,” she said. “When all the school shootings happened I realized that I wanted it more for my own personal protection and I thought that that idea of being prepared to protect translates very well to the classroom for teachers.”

Nonetheless, there are some who believe there is no place for guns in schools.

Stevenson believes that by allowing teachers to be armed, the message is being sent to kids that they aren’t safe and that using guns is an acceptable way to solve problems.