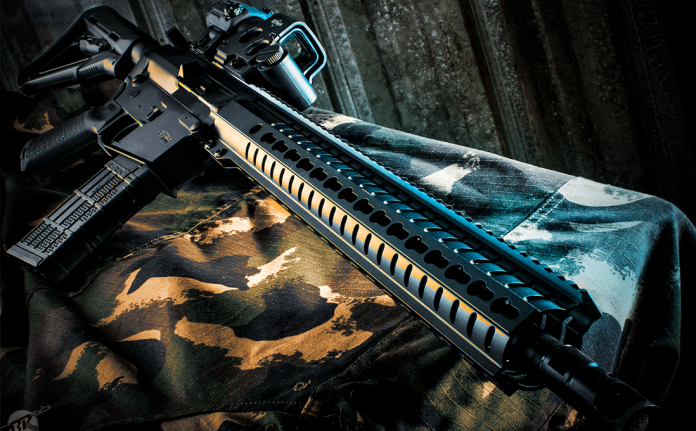 Rifle makers CMMG dropped the MkW Anvil into their mid-sized AR lineup. Its intent is to eat large calibers with large casings so it’s no surprise this rifle is chambered in .458 SOCOM.

The MkW Anvil also favors the AR-10 body in addition to the bolt. Set upon an AR-10 platform, the upper receiver is shortened by three-quarters of an inch. This reduction in size aims to minimize weight and improve ergonomics. As it stands, the Anvil weighs in a 7.5 pounds unloaded on a 33.5-inch frame with collapsed stock. While the Anvil sits upon an AR-10 body, it still accepts standard AR-15 magazines which can hold approximately 10 rounds. The rifle does ship with a Lancer L5 magazine specifically designed for use with the .458 round though.

Chris Reinkemeyer, CEO of CMMG, said in a press release that the company is excited by the Anvil feedback from customers. “Our experiences with .458 SOCOM have been extremely positive in terms of accuracy and lethality on large sized game. With the new MkW ANVIL, we’re offering our customers a rifle that’s been engineered to maximize the performance of this exciting caliber,” he said.

The .458 SOCOM round is a bit of a novelty as most AR fans prefer the standard 5.56mm round. The concept for a powerful round that would fit within the confines of the M4 and its magazines and could fire at subsonic levels with a suppressor was born out of disastrous Task Force Ranger debacle in Mogadishu, Somali — later transformed into the 2001 film Black Hawk Down.

While pinned down and with little hope of survival, the Rangers commented on the obvious lack of ineffectiveness the 5.56 round had on the Somalian rebels. The discussion resulted into the idea for an entirely new cartridge with increased “stopping power.”