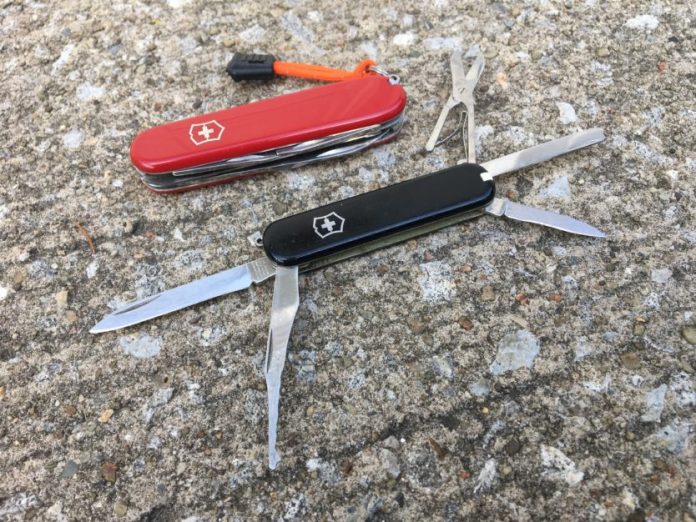 Growing up, my Dad and I watched MacGyver every week to see what new things he would do with his Swiss Army Knife to get out of a bind. I also remember my Dad always having a Swiss Army Knife in his pocket regardless of what he was doing. My Dad preferred the Executive style of knife Victorinox offered (top knife in featured image). The top knife in the featured image was purchased in the early 90’s and is still going strong to this day. My Dad was a real-life MacGyver in my eyes. He could fix just about anything if he has his knife on him. He even went as far as modifying the blades to suit his needs. The orange peeler blade, he modified into a lock rake for lock picking. He always thought outside the box just like MacGyver did.

Kyle Defoor recently posted a picture of a Victorinox Stainless Steel version that he got as a younger kid that is still going strong today. There is something to be said of the build quality of the Victorinox Swiss Army Knives.

My preferred carry is the Victorinox Hiker Knife (bottom knife in the featured image). It’s got everything I need for a hike or for daily use and nothing I don’t. The two most used tools on that knife are the main cutting blade and the bottle opener.

The Victorinox line of pocket knives have proven their worth over time and still find time in the pockets of many; even members of the military. The one thing I really like about the Swiss Army Knives is that they drop the ‘tactical’ profile found on many knives today. If you’re looking to drop that profile and blend in, then maybe the Swiss Army Knife is for you. I carry a concealed fixed blade for personal defense and a Swiss Army Knife dropped into my front pocket. There are no pocket clips exposed which help to keep that low profile in environments where someone may frown on the fact that you’re carrying a knife.