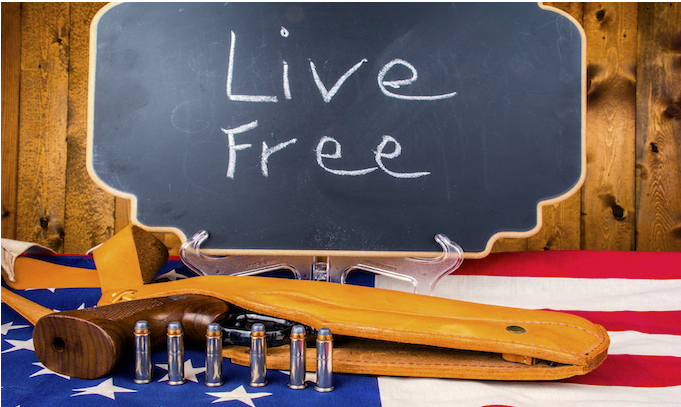 [Ed: This is an excerpt from Dr. Faria’s new book, America, Guns and Freedom, minimally edited for DRGO. It was originally published at GOPUSA October 14 and on his site HaciendaPub October 16.]

Depending on the level of culture and social progress, violence can take different forms in different societies. In the mid‑twentieth century, Stalin’s brutal communist government killed more Soviet citizens through privation, forced labor, and famine than soldiers fighting the Germans in World War II.

In 1994, the Hutu‑led Rwandan government massacred between 800,000 and over one million people, mostly Tutsis, genocide carried out largely with machete (not gun)‑wielding government forces. The massacres took place despite the presence of UN “peace‑keeping” forces, armed with automatic weapons who failed to intervene. The Tutsis were unarmed and helpless.

Civilian disarmament has always preceded genocide by authoritarian states. The political formula for accomplishing this goal is and remains: Media indoctrination against firearms, followed by gun licensing and registration, then banning and confiscation, and finally total civilian disarmament. This is what could happen if Progressives, who are openly embracing socialism and gun control, win the elections in 2020. But what can we learn from history?

In the Spring of 1943, the inhabitants of the Warsaw Ghetto, having become aware the Nazis were deporting the remaining Jews to the gas chambers of Treblinka, took up arms—whatever they could ﬁnd—and rebelled against the German occupiers. These determined insurgents had only homemade Molotov cocktails and a handful of small arms, revolvers, pistols, and a few military or hunting riﬂes. It took vastly superior Nazi forces to subdue the rebels, and the Germans suffered as many as 300 casualties pacifying the city.

There were several other armed struggles and Ghetto uprisings, and both the Poles and Warsaw remained serious problems for the Germans during the remainder of the war. Polish Jews continued to procure whatever arms they could find to defend themselves in their struggle, repeatedly disrupting the timetable of the Nazi high command and the German war effort.

The last major Polish uprising in August 1944 was to be launched in concert with the liberating Soviet Red Army. But the advancing Red juggernaut suddenly and inexplicably halted. Advised by General Georgi Zhukov, Stalin rejected the appeals of the Western allies to assist the insurgents.

For two months the courageous Poles fought the Nazis in heroic urban warfare without any assistance. Stalin had simply halted the advance of the giant Red Army to allow the Germans to destroy the non-communist freedom fighters: 200,000 Poles perished and 800,000 were deported to the death camps. Warsaw was erased by orders of Adolf Hitler, and the Soviets at the outskirts of the city did nothing.

During the summer of 1944 in the ongoing carnage of World War II, German troops were retreating on multiple fronts. Hungarian allied troops were defending the motherland from the onslaught of the Soviet Red Army, yet in the midst of the chaos, nearly 500,000 Hungarian Jews were rounded up and deported to the Nazi death camp Auschwitz–Birkenau, where 90% of them were summarily exterminated in the gas chambers.

A reign of terror ensued for those who remained in Hungary. Thousands of them were tortured, robbed, or murdered; Jewish women were raped; property was looted or conﬁscated. These atrocities were carried out with a minimum of Nazi troops. How could these atrocities have been carried out with only a minimum of Nazi troops? The Hungarian state had outlawed the possession of firearms for its citizens. Simply put, this happened without resistance because the Hungarian people had been disarmed.

After the triumph of the revolution in 1959, Fidel Castro reneged on his promise to establish democracy in Cuba. Instead he seized authoritarian control. A 100,000-member “militia” was organized to seek out the political opposition and actively disarm it. Castro then disarmed all other Cubans who were not considered reliable supporters of the revolution that soon turned communist.

The communists and the secret police (the G2) had a well-drawn blueprint to follow—the local firearm registration lists that former dictator Fulgencio Batista had established. All the communist militia had to do was to seize the registration and licensing lists, then go door to door searching for and confiscating firearms. The militia tried to disarm my father, a physician, and the episode is recounted in my book Cuba in Revolution: Escape from a Lost Paradise (2002).

Since Fidel Castro took over the island in 1959, the best figures we can glean are that between 30,000 and 40,000 Cubans were either executed by firing squads or died at the hands of their communist jailers.

From 1960-1965, hundreds of anti-communist rebels, many of them former Revolutionary Directorate (RD) members, went back to the hills of the Escambray Mountains in my native Las Villas province to fight the new communist dictatorship of the Castro brothers. The mostly peasant insurgents, defending their lands, lacked sufficient weapons to overcome the well-armed communist Cuban military forces. Thus, most of these peasant insurgents were annihilated by 1966.

Moreover, between 1960 and 1993, 36,000 Cubans perished at sea trying to escape the Castro brothers’ communist inferno. If we include all of those who died escaping the regime, those who were shot or died in custody, the figure well exceeds 100,000. In fact, the late scholar Armando Lago arrived at a death toll of over 105,000 victims directly attributed to the regime of Fidel Castro.

Civilian disarmament is not only harmful to one’s freedom and potentially deadly to one’s existence, but also counterproductive in achieving safety. During the twentieth century, more than 100 million people were exterminated by their own repressive—police states bent on destroying liberty and building communism, socialism, collectivism, and other utopias that turn out to be hells on earth.

Some of the deceptive promises made to the people by the authoritarian governments of these “people’s democracies” were eerily similar to the promises Progressives are currently making to American voters: Free higher education, making the rich pay, free health care ( “Medicare for all”), gun control, etc.