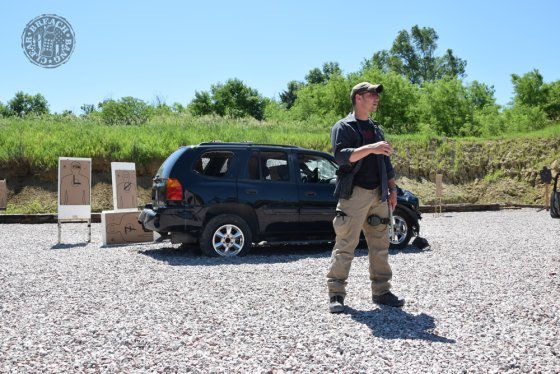 Bags were packed, unicorn t-shirts were folded and I was off to Tekamah, Nebraska. When I was flying out I was trying to think what value a course like this would be for the average civilian. I figured that CCW would be my angle on this, even though none of my gear for the trip involved IWB holsters or Tommy Bahama shirts. The normal everyday person who carries a firearm on a daily basis would be my inspiration on how I would analyze my experience.

The first day we started in a classroom where Petty went over the importance of historical data and scientific findings related to VCQB. He covered theory and existing mindset and how his view changed and became more refined by the hours of research and practice he conducted. What was nice about this part of the class was that he laid the foundations and allowed students to understand where he was coming from and how he’s developed the VCQB curriculum. Having Firelance Media on hand filming everything for a training video gave us the chance to to capture our mistakes on film. 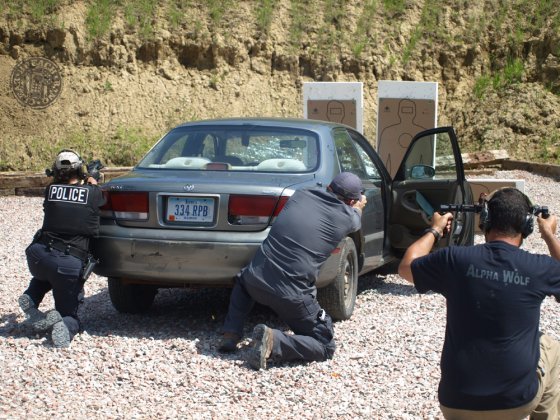 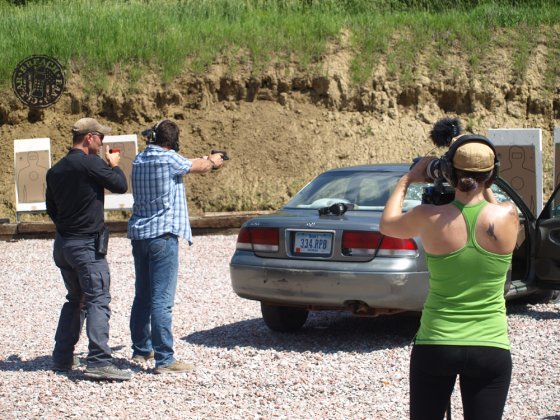 After a few power point slides we headed to the range where we learned positions we’d later put into practice. What I liked about these is they broke from our normal (civilian) way of shooting at a range. The positions were a bit awkward for a dude that usually just stands in a bay and shoots paper. Petty corrected all my bad habits and gave the group reasons why these positions are important in a VCQB scenario. After rolling through the gravel we headed back to the classroom where we watched footage of actual officers in gunfights around vehicles. This part hit me hard. Seeing people caught in fights that last mere seconds, and knowing better training could have reduced their risk of injury or death, made me realize how important this class is. It’s obvious that this type of training is important for law enforcement, military and military contractors but I also saw how armed citizens can benefit, especially if they make the choice to carry daily. We then headed back to the range were we went through the ballistics portion of the course. This was most fascinating for most of the crew, especially the super firearm nerds. After all the grain counts and caliber pontification the most important thing I took away was that there are 16 points of cover on a car. That’s pretty serious if you think about it. Understanding these points of cover can give you the upper hand in a battle, even if it’s only for a few seconds. 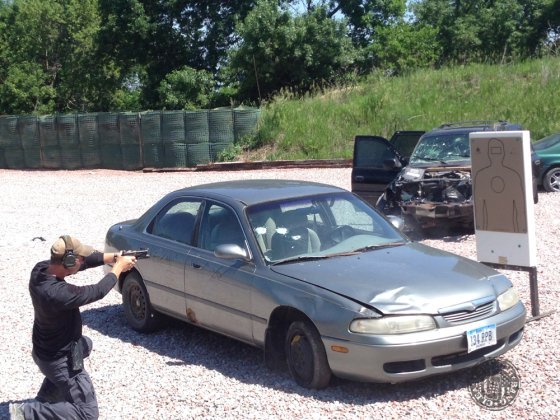 After waking from our slumber in the bunker (yes, a real fucking bunker) we headed down to the range again for day 2 to put the first day’s lessons into practice. We had learned theory, the art of cover and the different positions that could maximize this cover while fighting the bad guys. Theory is one thing, practical application is another, and I would be lying if I said I wasn’t nervous. 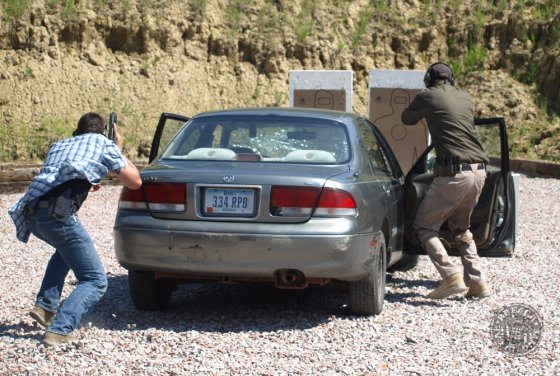 The drills started with us sitting in the vehicle and on the call of “threat” we’d unholster our weapon, put 3-5 rounds through the windshield, make our way out of the car to engage threats and then clear and hold, all while Petty would yell out where the threats were. We used techniques we learned the first day and revisited older techniques some might say are controversial, but once we went live we realized the keyboard commandos should put their keyboards on safe. I had never drawn a handgun while seated in a car, I’d never had to also deal with the seat belt, never had to get the fuck out of the car and never had to sprint to cover. I’m just a dude, playing a dude. But I did it all, and feel my actions were a testament to Petty’s teaching style. On cue I was able to tap into all those things we had learned (no more than a day earlier). Petty’s style and constructive criticism allowed me to proficiently perform the drill. I walked away feeling confident, and that made me realize this class is valuable for the armed and responsible citizen.

The third day had us stepping up the pace with a drill meant to simulate stress and promote learning through failure. This famous Petty drill is known as Alphabet Soup. What I liked about this drill is that it would simulate the presence of innocent bystanders and the quickness of a gunfight. There were a series of targets in all different positions with letters and numbers. You were only to hit the targets Petty called out, or be disqualified. And he yelled them out and changed them quick (that’s the stress part). To make it even more hectic he used a 2×2 piece of would to block the ejection port on the student’s rifle and force weapon malfunctions. This drill taught us to move from primary to secondary weapon systems, then quickly clear the malfunction to put the carbine back in the fight. 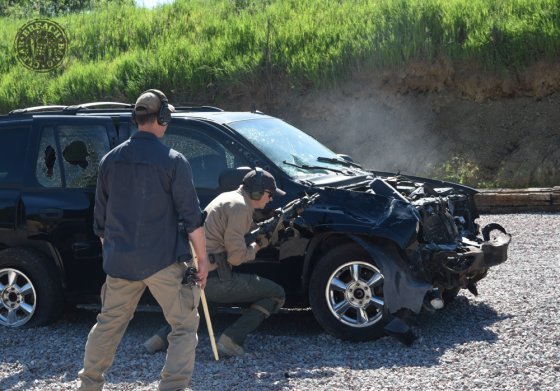 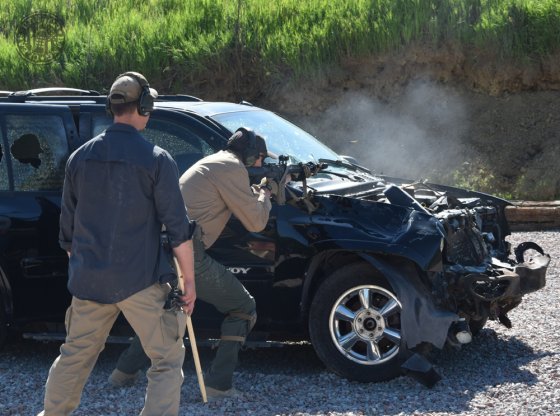 Sure, most of us don’t have a rifle in our car, but this was valuable for regular dudes because it teaches us how to function under stress and get rounds on target. This part was so intense that watching video won’t do it justice, you’ll need to experience it first hand. Even the seasoned gunfighters in our group said this drill was super intense.

The final piece of the course was force-on-force. This part was sketchy, cause getting hit with a UTM round hurts. I never used these before but when I saw Murr making a cardboard jock strap to push down his pants I knew shit was about to get real. We all took turns battling each other, one dude even brought an AR UTM (cheater), and after all was said and done I had learned a few things.

The aggressor always wins in a VCQB battle. Yes, it’s good to get adequate cover but you better fight. The high ground in a VCQB fight is an advantage (I’m not talking about jumping on the roof) and it should be your first go-to in terms of coverage and controlling the fight. 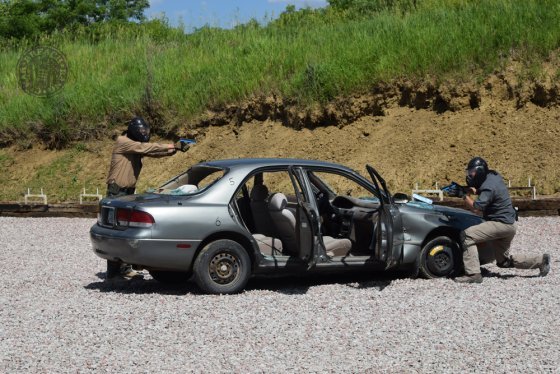 So, what does this normal everyday citizen think of the course? Well, it’s great on many levels but here are three:

1) Better weapons manipulation – Training is key and if you own a firearm you need to train with it in a variety of environments. Don’t become that lazy indoor range shooter; sign up for classes with reputable instructors that will push your limits in a safe manner.

2) Train in ways that mimic your everyday life. We spend too much time in our cars (see, I am a hippie) so if you carry everyday, a VCQB class can be an invaluable learning experience.

3) A good tactical instructor should have a full understanding of their curriculum with proof that enforces their view point without putting down existing teachings. They should be able to work with a variety of people and their differing experience levels and have a sense of humor. William Petty had all these traits and then some.

Thanks to William Petty, the crew at 88tactical and Firelance for making it all come together: make sure you watch Firelance for the announcement that the training video is done. Should be a good one. 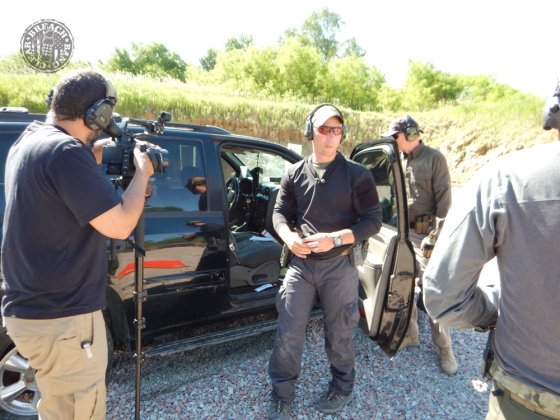 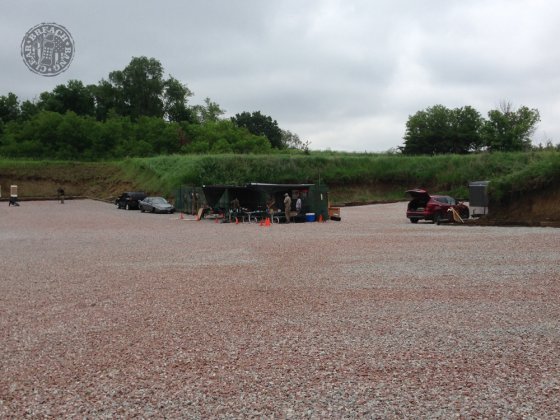 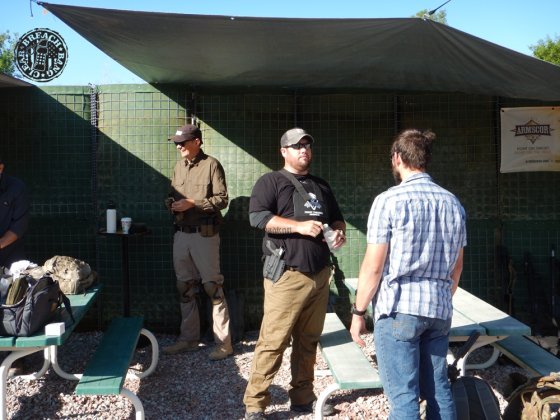 Read more articles about the course from other authors: