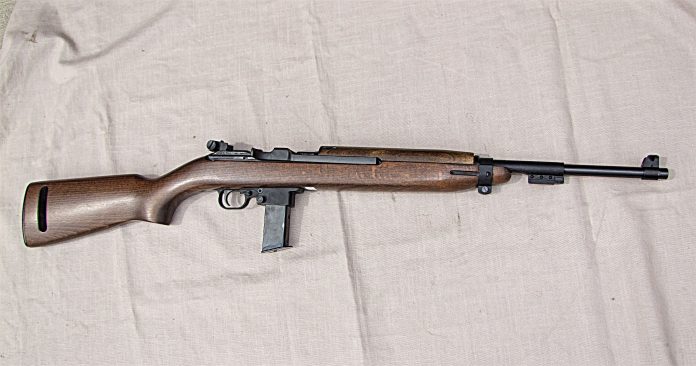 I was a true country kid in the sixties and seventies. Nearly everyone had a BB and/or a pellet rifle, our dads hunted and nearly everybody knew how to shoot. Heck it was not unusual to see long guns hung in window racks of trucks most of the year. Things like mass shootings were never heard of. From a young age we were taught to respect firearms. They were both a source of food and fun.

I recall having a young boy’s crush on the first really cool rifle I ever shot, the M1 Carbine. My God father’s father in-law was one of the preeminent gunsmiths of the fifties and he had lots of great firearms. He had multiple true 18th century Pennsylvania Long Rifles, vintage lever rifles, a pristine Colt 1873 Peacemaker (yes we shot it), a vintage Browning A5 with poly-choke, loads of custom rifles and a M1 Carbine. What drew me to it was its size and how it fit me as a young kid. Only later did I learn about that little lever opposite the charging handle, the selector switch

The M1 Carbines had a certain mystique. While they saw little real front line service during WWII, they were always present in movies. Even Audie Murphy carried one. If Audie had one it had to be a great firearm; after all he was the most decorated soldier of WWII.

When I enlisted in the Air Force reserve as a Security Policeman, the M1 Carbine could be seen in photographs of Army MPs when it was the Army Air Corps. Air Police and early Security Police were at posts guarding B47s and various access points. These were quickly replaced by the M16. While the M16 was replacing the M1 still saw service with Security Police throughout Vietnam. There were still a few in inventories of units like my reserve unit. Seeing these carbines kept that boyhood like of the carbine alive

Fast forward to my late twenties, M1 Carbines kept crossing my path when at the range. Finally I bought one, it was a pristine Inland. From the day I purchased it with several hundred rounds of surplus ammunition to today it remains wicked accurate, easily emptying a thirty round magazine into the upper A zone of an IDPA target.

The problem with the M1 Carbine is there is little application for it. Its cartridge the 30 Carbine runs out of steam around 100-125 yards so it’s not good for three gun. With modern ammunition it is a great house gun or plinker, that’s about it. That was until late in 2016, I started seeing emails about a M1 Carbine chambered in 9mm. A 9mm M1 Carbine, no way, has to be a misprint

These emails were coming out before the 2016 SHOT Show, so this carbine would be my quest. I had to find Chiappa firearms. Lo and behold there it was a 9mm M1 Carbine. It even had a wood stock. While handling it, the fond memories of time at the range with my dad and God father flowed. Based on those memories alone, I had to have one. But wait, there was more; it used Beretta M9/92 magazines. Later I would find out that Chiappa offered a mount so you can install a red dot, which for those of us well over twenty five is a blessing. That was it, I gave the appropriate folks a copy of my FFL and they got the ball rolling to send one.

Around the end of March I received a notice from UPS that I had to sign for a box. I had forgotten the carbine was coming; it was a pleasant surprise to see it. The M1C 9mm felt just like my Inland M1 Carbine.

Fit and finish were excellent, trigger was typical of the M1C, and it felt right. I put it side by side with my Inland and save for the receiver, they were twins; save for the bore diameter of the barrel. Controls were the same, sights looked the same except the Chiappa’s were not as beefy as the Inland and of course the receiver/mag well was different.

There was one big difference, which I mentioned to Chiappa; it lacked the GI style bolt catch. If this was just going to be a plinker or even a “house gun”, that is not a really big deal. However for use in USPSA and 3 Gun now have Pistol Caliber the Carbine class competition, it is needed. With its price point of $679 full MSRP, lightweight the M1C9 this is ideal for competition.

Closer examination of the carbine revealed dovetails machined into the receiver. These are for long and short rails that Chiappa offers to facilitate mounting optics. With the GI type sights this is a must have $40 dollar option, I ordered a long one.

With the rail was on the way I needed an optic. Since it chambered in 9mm, I knew this was not a long range rifle so a quality red dot would be ideal. One of the best values on the market today is Truglo’s TruTec 20mm. Before you snicker, remember this carbine is not going to be used to chase the Taliban all across the Afghanistan mountainside. It is for plinking and PCC competition. From past experience with Truglo sights, I can tell you they are tough and can handle this level of hard use. One of mine has been on numerous shotguns, it endured hundreds of 12 gauge rounds. At $221 with a mount, auto-sleep/activation, and impressive battery life, I knew the TruTec would be good choice for this competition carbine.

Since the rail and optics had not arrived for the initial trip to the range, the factory GI type sights would have to do. I was shocked the carbine was not shooting consistently.

Literally rounds were all over the target. After I calmed down and looked at the carbine the problem was solved. The screw that secures the receiver to the stock was loose. Drop of thread lock and a few twists of the range multi-tool, problem solved and back to shooting.

While these are not exactly match target sights, at 25 yards I was able to consistently get upper A zone hits on an USPSA target. Ten shot groups shot off hand hovered around 3”. With the boxy front sight and small peep rear, that is about what I expected. At 50 yards, I was able to keep 10 rounds in the “C” zone. While not great, the factory sights are useable. The front post blocks most of the target at 50 yards making accurate shots hard. They also were not as well regulated as they were on a Mil-spec M1 30cal Carbine. To get consistent hits at this distance the rear sight had to be set at its maximum elevation. I really was not that concerned about lack of match grade accuracy since the rifle hit where it was aimed and a red dot was going to be mounted.

During my initial trip to the range, I noticed the bolt/gas system was not the short stroke piston and rotary bolt of the original. Chiappa uses a standard blowback design with traditional pistol block set-up. For consistent operation use standard pressure 115 grain and 124 grain loads. Using “+P” rounds this rifle ran flawlessly. Quality 147 grain hollow points ran the M1C9 but for self-defense and competition, I would avoid them. The lighter factory target loads were problematic as were my handloads I use for shooting USPSA.

When the long rail arrived I installed Truglo’s TruTec red dot. Once zeroed, making consistent “A” zone hits from ten to fifty yards was as easy as putting the dot center mass and pull the trigger. Taking my time to properly center the dot, upper A zone shots were just as easy at any distance. I am sure with a 1-4 or 1-6 variable power optic this carbine will put bullet on top of bullet at fifty yards that is how accurate it is.

The Chiappa was accurate with all the test ammunition. For my use as a handy carbine to shoot USPSA PCC or as a truck gun, it was hard to say which ammunition was most accurate. I didn’t see the need to break out the micrometer and split hairs. I like that the carbine shoots consistently with a variety of loads and reliably with full power ammunition. To ensure reliability, keep it lubricated. Blowback operated firearms function best when properly oiled, a bit to the wet side is better.

With the 1 in 16 twist, 18” barrel standard loads picked up 50 to 100 feet per second over a 5” pistol. Recoil and muzzle rise are minimal even with the hottest loads and the rifle transitions quickly from target to target thanks to its 6 pound weight and compact size.

Chiappa’s M1 Carbine 9mm is a helluva rifle. Adding Truglo’s TruSpec red dot with quality ammunition turns a classic styled carbine into an affordable fun carbine for competition, plinking or self-defense. An additional bonus is the size and weight, this is a centerfire rifle that fits virtually anyone. With its low recoil and inexpensive ammunition Chiappa’s M1C 9 makes an ideal carbine for beginners.

If you are in the market for a pistol caliber carbine Chiappa’s M1 Carbine 9mm would be a good choice. When you get yours, take it to the range and shoot straight, shoot safe and have fun.