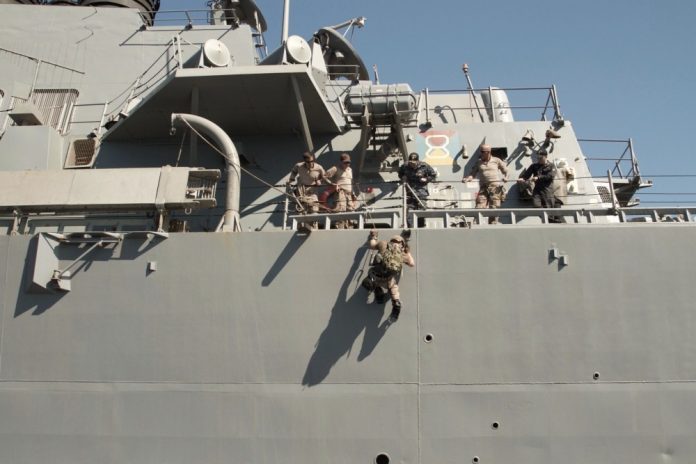 America’s special operations units have seen a dramatic uptick in the missions sets they’ve been tasked with throughout nearly two straight decades of the War on Terror, but despite some overlap in combat operations, each specialized unit has a specific area of expertise to draw from. The Navy SEALs, as most could assume from their name alone, specialize in water-born operations, and as such, they have a long list of specialized tools in their team rooms for just that sort of work.

While SEALs are often seen in Defense Department footage fast roping down onto the deck of ships from aloft helicopters, the reality of modern combat dictates that such an insertion isn’t always possible. That’s why SEALs don’t only employ quiet, stealthy watercraft — they’ve also got some loud, angry, souped up boats that are perfect for rapidly closing with enemy vessels. The problem is, once you’ve whipped your supercharged jet ski up alongside an oil tanker full of terrorists… how do you get on board? That’s where the incredible tech in the REBS Magnetic Climbing System comes in.

The REBS system is made up of four high-powered magnetic grips, with two designed to capture feet and two intended for use with your hands. The lever operated system is entirely waterproof and dive capable, meaning SEALs and other combat divers can actually engage the system from beneath the waterline to begin their climb up the ship’s hull to the deck.

SEALs put this system on display during a demonstration in Greece two years ago during a joint Special Operations exercise, in which SEALs used specially modified Yamaha FX Cruiser SHO jet skis to approach the USS Porter (an Arleigh Burke-class guided missile destroyer). Once they reached the ship, the SEALS then produced their Magnetic Climbing Systems (MCS’s) and used them to scale the external hull of the vessel, ultimately climbing onto the ship’s deck.

The REBS MCS is actually only one of a number of superhero-like devices American special operations troops have at their disposal. One company called Batelle is hard at work at Batman-style grappling gun, and equipment that literally pulls operators up their ropes already has a place in SOCOM’s tool box.

Here I am testing a similar device in Las Vegas.

America’s special operations forces may have to do some of the heaviest fighting once they reach their destinations, but the truth is, there’s just as much time, thought, effort, and expense put into determining the best possible ways to get them there and back again as well. If this is the stuff that’s shown off in demonstrations, one’s left to wonder just how superhero-like the classified equipment in operational use today may be.