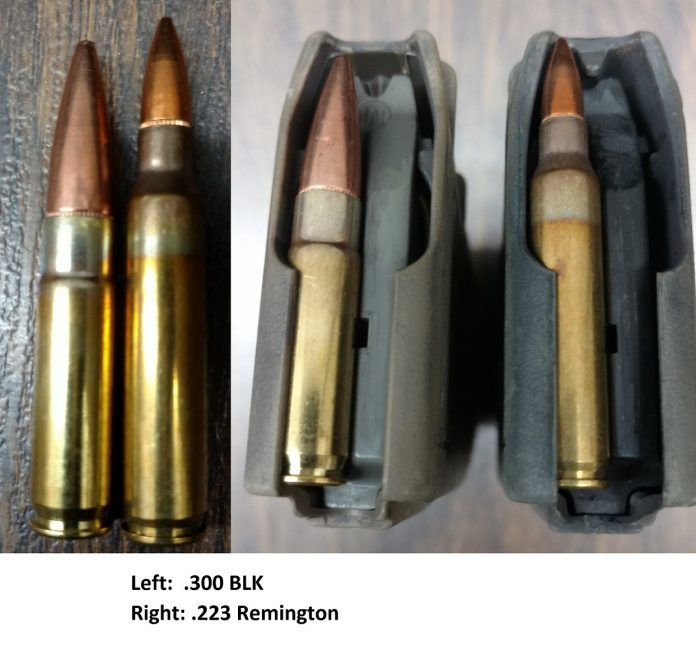 I was at a friend’s home to try out his .30 cal suppressor on my SBR. I have the same make and model suppressor waiting on the approval of my Form 4 (about 2-months to go). My friend had just obtained a relatively new 10.5″ upper that came with an Aimpoint T2 for a decent price. When I found out that his whole family was going to be home and he was firing up the BBQ grill, I offered to bring my (registered) select fire AR and .22LR sub-caliber device for them to shoot. After I let the whole family, plus one of the sons’ friends, run 325-rounds of .22 LR ammo, we recovered back to the patio where I got to test out his .30-cal can on my 10.5″ 5.56 SBR.

– Situation:
After I was done, my friends’ youngest wanted to do some shooting with him. So I stood back while his son shot a suppressed M&P-15-22 at some water bottles filled with colored water. Once the youngest got tired (or frustrated?), my buddy decided to give his new upper a try while suppressed. As I was removing his (still hot) .30-cal suppressor from my SBR, his oldest son, a very hard-headed, 18-year old, recent HS graduate, know-it-all with an attitude, came out of the house and “declared” that he wanted to shoot the new gun (MISTAKE #2) (I will mention MISTAKE #1 later). He put on a set of ear muffs, picked up the rifle, grabbed a loaded magazine off the table and abruptly asked his Dad if he had the right “bullets” (MISTAKE #3). My friend quickly looked at them and nodded yes (MISTAKE #4). I observed the rounds loaded in the mag had red ballistic tips and was wondering why he was shooting those instead of FMJs (MISTAKE #5 – mea culpa).

My buddy and his son went to the established firing point and his son loaded the rifle without waiting for any command (MISTAKE #6). He took aim at the target and BOOM!! A huge ball of smoke engulfed the rifle and I observed pieces flying away from the gun. When I took a closer look at what hit the patio floor, I recognized parts and pieces of the gun and its magazine. I informed my friend that the gun had just blown up. He gave me that “I don’t believe you” look and they dropped the magazine (a windowed PMag) and tried to unlock the frozen action.

As I was watching them struggle with the rifle, I glanced down and noticed that one of the items that hit the ground was a piece of brass that looked kinda odd. I reached down and picked it up and realized what MISTAKE #1 was – the magazine his son picked up was loaded with .300 Blackout ammo!! I had not realized that my friend had brought out his .300 Blackout AR and placed it on the same table as the 5.56 ARs. In his son’s rush to do things his way now, and his Dad’s decision to let him get away with it just to avoid a confrontation, nobody had the opportunity to do establish and follow the proper procedures thus resulting in a catastrophic failure of a new upper receiver and some (fortunately) minor injury.

– LESSONS LEARNED:
MISTAKE #1 – Segregate and clearly mark your different calibers before you get on the firing line. This is especially important between “related” calibers like the .300 Blackout and the .223 REM/5.56x45mm. As in this case, the .300 Blackout will chamber in a 5.56 – once. The same should go with the corresponding rifles. Consider dedicating your AR mags to a particular caliber and marking them accordingly. Mark all the magazines you plan on using for anything but a 5.56 AR. I personally like to use either red or yellow electric tape so that I can easily tell at a glance that the magazine is not meant for my 5.56 AR; I use a marker on both sides to write the actual caliber. The same goes with other calibers (.308/7.62 vs 6.5 Creedmoor). Wal Mart sells those plastic “.30 Cal” ammo cans for about $5.00. Dedicate one for each specific caliber and also make sure you mark them accordingly.

MISTAKE #2 – Just because you have given up on disciplining your “adult” child, it doesn’t mean you should not keep them in line, especially on the firing line. Don’t be afraid to tell anyone to hold off and step back until you can properly organize yourself and the range. The firing line is not the place to be a “nice guy”. I would rather share the line with a safe asshole, than someone unsafe.

MISTAKE #3 – If I were running the line I would have had the kid put down the rifle and magazine and have him step back until I was good and ready to deal with him. I have run into this very situation when running a range with to two dozen shooters, or more, vying for their turn to use a particular barricade or shoot at a particular target. I’ve actually stopped the whole line and explained to everyone that we are all going to take a timeout and had them all unload and ground their guns while we did. I took the opportunity to cite unsafe practices and attitudes. There is no reason to be rushing anything at the firing line.

MISTAKE #4 – When it comes to verifying the correct caliber being loaded into the correct firearm, take the time to really check. Even if you segregate and mark the magazines and ammunition as suggested above. Someone could easily make a mistake and mix up your organization.

MISTAKE #5 – I should have questioned if he meant to shoot what is obviously ballistic tips (which he uses to deal with raccoons, foxes and coyotes that go after his chickens) versus FMJs that he uses for training. This might have given him pause to more closely inspect them in detail and could have prevented the mishap.

MISTAKE #6 – Unless I give a shooter to load and engage at their leisure, I have been known to stop someone, have them unload and make clear, and have them wait until I am clear on what their intentions are. When I was letting the family shoot F/A, I maintained positive control of each and every magazine that was inserted into that gun. It didn’t matter that they could never have loaded any other caliber since the only source was a can of Federal .22 LR that I supplied. Even with the younger son, I took physical control of the magazine and inspected it before I let him load it into my gun.

– ADDITIONAL LESSON: I have never had the urge to purchase a rifle that was chambered for the .300 Blackout. Once in a while, I’ll come across one that is selling for a song and the “Good Idea Fairy” will make an appearance. But then I realize that I really have no need for one and would rather not another caliber to my collection. After this experience, the chances of me doing so is even less.

I hope this helps someone down the line. Stay safe!!

Born and raised in the Philippines under Martial Law, Carlos Santillan first immigrated to the West Coast of Canada where he purchased his very first firearm, a Charter Arms AR-7 .22LR pistol. Carlos eventually moved to Baltimore where he applied for and became a Resident Alien. Three days after receiving his Green Card, Carlos enlisted into the US Army as an Infantryman with the Airborne School option. He first served as an Indirect-Fire Infantryman in an Armor Battalion; spending the last 26-months of his 4-year enlistment as an Arctic Paratrooper.

Upon receiving his Honorable Discharge, Carlos transferred to the MD-ARNG where he eventually completed the State Officer Candidate School (OCS) program and was commissioned as an Aviation Officer. After rotary wing flight training, he was assigned as the Aeroscout Platoon Leader and Executive Officer in an Attack Helicopter Battalion, along with the additional duty as the Battalion Marksmanship Officer.

After 8-years of service in the Army National Guard, Carlos transferred into the Inactive National Guard and subsequently the Inactive Ready Reserve. Eventually joining the US Army Reserve as a Civil Affairs Officer, served for 4-years in various positions, eventually leaving the military after almost 30-years of combined service in 2013.

In addition to his military service, Carlos spent 9-years as a Volunteer Deputy and more than 15-years volunteering as an NRA Certified Basic Pistol Instructor at his gun club. He also founded and, up until his decline in health, ran that club’s Tactical Shooters Group – a group of more than 60 shooters who prefer to conduct tactically-oriented drills. Carlos holds a Bachelor’s Degree in Information Systems Management and an MBA in Information Security.