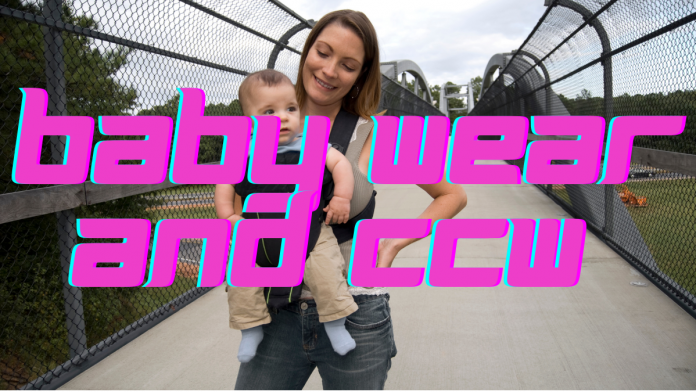 One of the most common reasons that new gun owners in 2020 identified for buying a gun was for family/home protection, a sentiment that makes a lot of sense to me. I have a small child, and one of his favorite things is to be carried around in his Tula (not the ammo brand) carrier. It’s basically a backpack that allows me to go hands free and tote a toddler around.

Now, I’ll be frank – since I left Miami, the odds of me needing to shoot someone have decreased significantly. 99.9% of the “threats” I’m likely to encounter on my walks now can be solved with a large helping of MUC from ECQC or the forbidden breath spray from POM. But I still carry because I am not an optimist, and because if, on the very small chance that I had a problem that was a gun problem, I’d die of embarrassment if I wasn’t strapped. So, I’ve had to come up with a solution on how to carry a gun when I’m also carrying a toddler.

So let’s go over the gear I’m carrying in this photo. In addition to the Apple Watch (gotta get them steps in), I am rocking a Tula Toddler Carrier to hold my most precious cargo in. I didn’t pick this carrier, my wife did, but apparently it’s one of the best carriers on the market, and it actually works really well for how I carry a gun at the appendix position. I also suspect that you could count the number of Tula users who also carry a gun and have solved this problem on one hand, but that’s not the point. This particular carrier uses a wide lap band with a plastic click in buckle for support, not unlike a duty belt, and then a smaller clip that goes across the chest to connect the shoulder straps.

Now let’s talk about how I’m carrying, and it should come as no surprise to anyone who’s familiar with me, or my content, that I’m rocking a wheelgun in a Phlster Enigma in this photo. Attached to my Enigma is a Dark Star Gear LCR Apollo, and jammed into that Apollo was, at the time, a 3 inch LCRx in 38 Special. The LCRx has been replaced with a standard LCR in 327 Federal, but the Enigma and holster remain the same. Here’s how this set up works to allow me access to the gun while wearing the Tula carrier.

When I realized I could treat the belt on the Tula the same as I would a regular gun belt, everything fell into place. With this set-up, accessing the gun is exactly the same as it would be if I wasn’t wearing a child on my back. Lift shirt with support hand, draw, present gun. Piece of cake. The lightbulb moment was when I was in my car one day and looked at how I wear my shirt over my seatbelt so I can draw easily from the seated position. I did that with the baby carrier, and suddenly my access issue was fixed.

This method does also work with a traditional belt/holster set up, however I’ve found that the belt does add a little bit of extra bulk that can be eliminated by using the Phlster Enigma. With Enigma, an LCR, and this Tula baby carrier, I’ve successfully carried a gun/toddler combo for well over 4 miles with no issues. I do respect that this is a highly gear dependent solution, and I have not experimented with other carriers or carry positions. I carry appendix and I have a Tula carrier, so that was the solution I needed to solve for. Hopefully this guide will help you solve for x in your own carry situation.