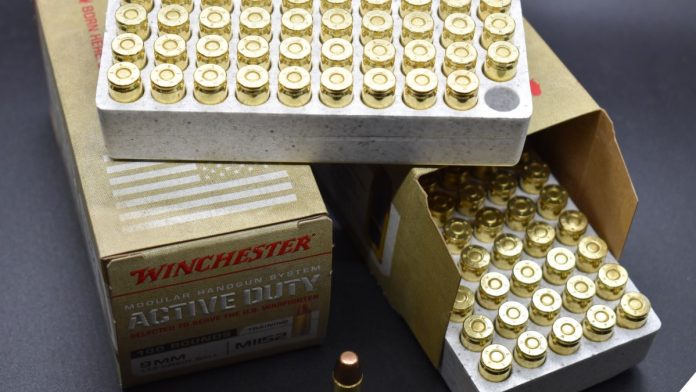 In the past few years, many gun owners took the availability of cheap, effective, and reliable 9mm Luger ammo for granted. (Photo: Chris Eger/Guns.com)

With millions of 9mm pistols and carbines in circulation, and more being produced every day, it was a shock to find supplies of said parabellum ammo vanish in the lastest panic.

Without a doubt, popular handgun calibers like 9x19mm Luger, .38 Special, .357 Magnum, .380 ACP, .40 S&W, and .45 ACP sold out fast and, while the stocks are resurging as ammo makers scramble to meet demand while complying with state-mandated lockdowns and federal COVID-19 safety guidelines, they are nowhere near what they were earlier this year. Added to the coronavirus-inspired buying spree is a new wave of urban unrest while events like the 2020 hurricane season and the general election in November are on the horizon, ready to spark their waves of gun rushes.

With that being said, some may be curious as to what is left on the shelves, seemingly impervious to the ammo-hungry masses. While as a rule none of these cartridges are compatible with those popular calibers that are sold out– you should never use ammunition other than the type that is marked on the barrel of your firearm– that doesn’t mean they are not comparable. If nothing else, it gives some food for thought as to what may be left behind in the wake of future surges.

Here is a sampling.

Reaching back to yesteryear Popular for generations, Colt Peacemakers and their myriad of clones are widely available– which means that both modern and down-loaded “cowboy” loads are also in circulations. Keep in mind that older guns designed for black powder should never be used with smokeless ammo. (Photo: Chris Eger/Guns.com)

Old school late-19th Century revolver rounds like .44-40 Winchester, .32 S&W Long and .45 Colt seem to still be available in a range of factory-fresh loadings. Typically seen in vintage cowboy guns, several manufacturers (looking at you, Ruger) make modern single-action wheel guns in these calibers as well, which has kept these cartridges in regular production. While they are seriously dated, 225-grains of copper metal jacket flat point often did the trick in the black powder days and could likely clock in today in a pinch. While it seems incredulous on this side of the pond, both .25 and .32 ACP were popular with law enforcement in Europe for a century, such as this Italian Carabinieri surplus Beretta 81. (Photo: Chris Eger/Guns.com)

Invented by famed firearms genius John Browning around the 1900s to feed various pocket pistols he had on the drawing board for Colt and FN, the .25ACP (6.35 Browning) and .32 Auto (7.65 Browning) were popular in their day but have increasingly been eclipsed by the .380 ACP and 9mm today. Nonetheless, there are thousands of old semi-autos from Colt, Browning, Beretta, Mauser, Walther, and others still floating around chambered in these calibers and to be sure, new production lilliputian pistols are still rolling out ready for these tiny sub-90-grain rounds. Gratefully, when it comes to self-defense loads, you have examples by Speer (Gold Dot) and Hornady (Critical Defense) that are upgraded from Mr. Browning’s original full-metal jacket designs. Best yet, fans of these calibers have not outstripped supply. If you told someone a decade ago it would be easier to find 10mm Auto rather than 9mm Luger, they would never believe you. Welcome to 2020, baby. (Photo: Chris Eger/Guns.com) In the days where you may find it hard to keep your Glock G19 stoked, it could be easier to find ammo for your good old $200 Tok. (Photo: Chris Eger/Guns.com)

Typically seen in milsurp pistols and revolvers such as Lugers, Makarovs, Mausers, Nagants, Tokarevs, and some CZs, new manufactured ammo like .30 Luger, 7.62x25mm, 7.63x25mm, 7.65x.38mmR, and 9x18mm seem to be left on the shelf from European makers such as Fiocchi, PPU, Tula, and Wolf. There also seems to be a supply of 9x21mm IMI, typically seen in just a few Berettas and HKs to get around bans on 9mm Luger in some European countries, available as well.

Of course, the variety of these loads is limited, but what did you expect, 9mm Luger?

SEE ALL HANDGUN AMMO IN STOCK