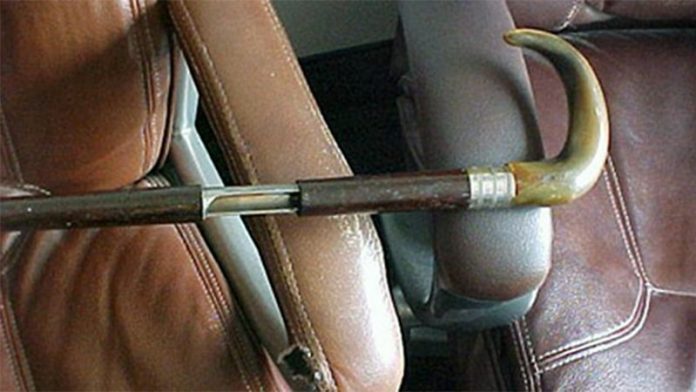 The most common accessory that the well-dressed gentleman in the 1850s carried was a walking cane. This simple object was a status symbol among those with taste, the equivalent of the rapier carried by nobles during the Renaissance period. You simply did not leave home without it—so what better place to hide a gun?

For the sixty or so years of the Victorian era, every gentleman with clean fingernails went about town with a walking cane. These canes were simple accessories (though they could often be quite ornate in appearance) and didn’t have a specific purpose other than as a fashion accessory, a symbol of taste, wealth and class.

However, the piece of mind that comes with traveling with a nice, sturdy stick in your hands was certainly an aspect of these early canes function/popularity as this period also saw one of the most notorious rises in street crime ever seen in the modern Western world. And with the canes marking these gentlemen as targets for ruffians as much as defending against them, you could see why it soon became fashionable to have not only a cane, but also one that held a means of protection. This led to cane swords, but these were largely outpaced by the rise of small, concealable pistols, used both by citizens as well as by the criminal elements.

Why bring a sword to a gunfight? This line of thinking led to canes that were in fact, working firearms.

It may surprise people today, but the most commonly encountered cane gun that ever saw mass production was made by American gun great, Remington Arms. The company’s master mechanic John F. Thomas patented (#19,328) a percussion fired single-shot cane rifle in 1858 and within a year, Remington was selling their guns to an eager public.

These weapons could fire a .31 caliber ball with a load of black powder ignited by a percussion cap. Weighing from 20 to 24-ounces depending on length and caliber, the

canes were coated with a natural rubber known as ‘gutta-percha‘.  They tend to be between 33-36 inches long overall. To fire the gun, pull the handle back to a cocked position, aim the cane, press the small button recessed in the handle that actuated the striker and hold on.

It sold well—a successful novelty that any gentleman of means and distinction would have been pleased to own. By 1866, the percussion model was replaced by one that fired either a .22 or a .32 caliber rimfire cartridge. All of the models, even the percussion ones, were breech loaded by unscrewing the cane to allow access to the chamber. Between the three distinct versions, some 4500 or so Remington cane guns were made before the company ceased production in 1888.  This number however does not do these guns’ legacy justice.

Once exported, the Remingtons led to an overseas arms race to produce other, better cane guns. The French firm of Dumonthier made a smoothbore gun of about .410 calibers that had a very similar design to the Remington, only it was centerfire. Briggs of London jumped on the bandwagon in the 1860s with a cane that broke apart to conceal a hidden 4-shot .22 rimfire caliber pepperbox revolver. Dozens of smaller firms sold unlicensed and usually unmarked versions of their own guns all over Western Europe, many of which have made their way to America.

Just as Remington closed up shop on their cane gun, Edward Bean of Boston patented his Bicyclist Cane Gun and put it into manufacture through an agreement with Iver Johnson. His gun was different from the Remington in that the cane handle was used as a buttstock for the rifle-like firearm. Bean was a very prolific inventor in the late 19th century and was responsibly for various whistles, handcuffs, and other police gear as well as the cuffs behind the success of a young Harry Houdini (no word on if Houdini packed a Bean Cane Gun, however).

Cane guns are funny (that is funny as in peculiar, not funny as in a clown). Since 1968 these gadget type guns, with their cousins the pen gun, umbrella gun, ring gun, and others, have been considered ‘Any Other Weapon‘ by the BATFE under the National Firearms Act. This means that these devices, just by the nature of being crafty hidden guns, became crazy regulated regardless of capacity or lethality.

Guns grandfathered at the time were and may still be transferable; those that weren’t can bring their current owners big jail time.

There appears to be one well-known exception though: pre-1898 made guns are considered antiques and can therefore be sold without even going through an FFL. Luckily, the Remington cane guns, Briggs guns, some Dumonthiers, and most of the Bean guns are non-NFA due to their age but stay away from any modern cane gun (made after 1898) that is not currently registered (unless ten in the federal pen is something you look forward to).

The Remington cane guns are the most common, especially when counting only guns in good condition. They will be marked “J.F. Thomas Patent Feb’y 9, 1858 Remington & Sons Ilion, NY” on the cane tip. Late model Remintons made in .32 rimfire will have a 1872 patent date. Look for markings where the handle meets the barrel shaft as well. These guns often had wonderful semi-custom handles such as dog’s heads, bulbs, ball and claw types, and the most commonly encountered right angle. Never use any sort of abrasive cleaner on these canes, as the 150-year old gutta purcha rubber cannot handle it.

Dumonthiers will have the maker’s name on the breech as well as two cartouches. Be aware that newer Dumonthier (they made can guns as late as 1940) capable of firing .410 shells are very much NFA regulated. Beans often have very few markings and are hard to identify. Further references and appraisals should be consulted when valuing these antique firearms before an offer is made or taken.

These guns have immense collectors value and run from $1500 for beat up examples to $8000 for very nicely preserved ones. It’s unadvisable to fire these pieces as the ammunition types such as .40-caliber Bean, .32 Remington Rimfire, and 2.5-inch Dumonthier 12mm are not only unavailable but also crafting modern recreations would involve unsafe guesswork.

However, you can always buy a new one….

There are custom cane gun makers today who make weapons that are just as well built as in previous generations for those in need of a little swagger. One current maker, Boris Palatnik sells custom quality compressed air cane guns that fire .22-caliber ball bearings at 600fps (capable of penetrating 1/4 inch drywall). Of course, they cost $1300 clams, but hey, they are functional works of art. By using compressed air, there are not subject to AOW regulations. Not satisfied with air guns, Red Knight Armament makes NFA regulated cane guns with walnut shafts embellished with stainless steel in .22LR, 38SPL, and 44MAG. They run $1000-$1500 depending on the model, plus tax stamps and transfer fees, but hey, if you just gotta have one….