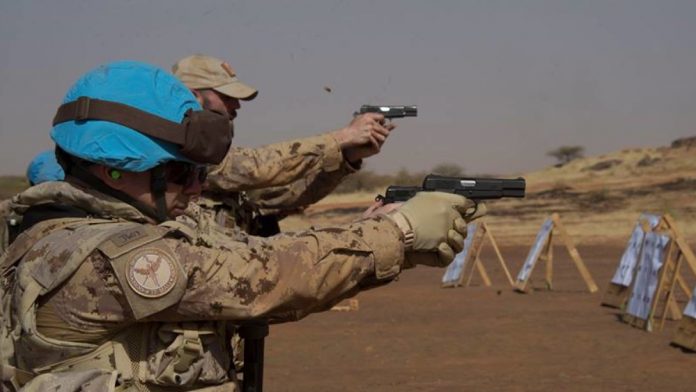 Canadian Browning pistols at use with Task Force Mali in Africa this month (Photo: Canadian Forces)

Canada built its own, more Maple Leaf version of the Browning Hi-Power in Toronto during World War II, and their military is still using them. Recently spotted with Canadian Army troops on a UN peacekeeping mission in the African country of Mali, those same 1940s-era 9mm combat handguns are still holding the line.

How the Canadians came to make the BHP

Designed just before the outbreak of World War II by FN in Belgium, the factory that made the Hi-Power was repurposed in 1940 after the Germans occupied the country and production started back up to provide the handy 9mm pistols to Hitler’s legions. However, the Allies soon started making the 13-shot semi-auto in Canada, manufactured in Toronto, by John Inglis and Company with a little help from Dieudonné Saive, the Belgian firearms engineer who helped design the gun in the first place. Final assembly of High Power pistols for issuance to Allied forces under a Canadian Mutual Aid Board contract at the Inglis factory, 1945. Note the Maple Leaf on the front of the grip. Also, note the buttstock attachment and 500-m sights of the Canadian Inglis Mark I Hi-Power. (Photo: Library and Archives Canada)

These Browning-Inglis guns at first were meant to be shipped to China, then fighting the Japanese and strapped for modern weapons but in the end, went on to equip both Canadian and British units in the latter days of the war. Due to their much larger ammo capacity when compared to Enfield, Webley and Smith & Wesson Victory series revolvers, the Toronto Hi-Powers were often used by groups on the “tip of the spear” such as paratroopers and commandos. The world moved on, and Canada will too…someday

After WWII, the Browning Hi-Power became the gold standard for Western military sidearms and was adopted throughout not only the British Commonwealth but also by many Western European powers with the notable exception of the Italians (who stuck with Berettas), the West Germans (who kept their Walthers) and the French (who retained their MABs). The U.S. Army even flirted with the idea of buying Inglis-made “Light” Hi-Powers in the 1950s before remaining on the 1911 bandwagon. As for Inglis, they started making washing machines and appliances– the company later morphed into a division of Whirlpool Canada — and shipped their tooling for the Hi-Power to India in the late 1950s.

Nonetheless, as polymer became king and the single action all-steel Hi-Power lost favor, most Western militaries shifted to HKs, Glocks, and Sigs, leaving just Australia, India (who is still making Hi-Powers in Ishapore!) and Canada to soldier on with their BHPs.

In 2016, the Canadians moved to replace the 14,000 assorted wartime-made pistols still in inventory with a new gun by 2026, but that program lost steam. Now, a newly-implemented General Service Pistol replacement project has begun with the goal of acquiring 4,738 new sidearms. It’s reported that the government will consider selling the surplus guns once they are finally retired.

Time could be of the essence, as the old Inglis guns are not what they used to be. Canadian Army Today reported last December that, of 20 pistols brought to a recent military small arms competition in the U.S, 15 had to be pulled from the event due to the high number of jams.

But for now, the relics continue to serve wherever the Maple Leaf waves.