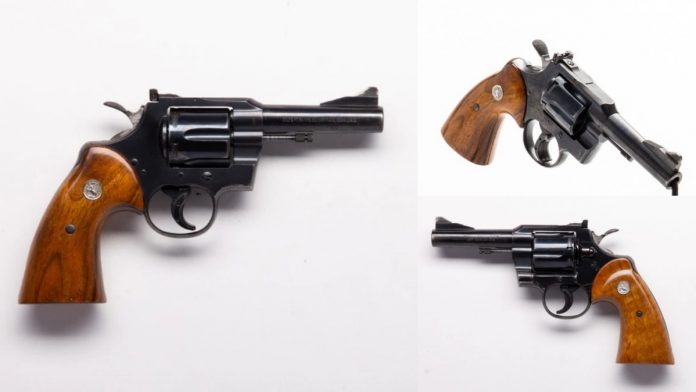 The Colt Trooper, as exemplified by this superb model in .357 with a circa 1967 serial number currently looking for a home in our Vault, was a dependable revolver that lived in the shadow of its flashier Python big brother.

Colt’s medium-framed double-action Trooper was a treasured workhorse in the company’s stable for over 30 years.

Whereas the vaunted “I” frame Colt Python ran closer to the price of a show horse, the Trooper was a more affordable offering in the gunmaker’s catalog when it first appeared in 1953. Offered in .22LR, .38 Special and .357 Magnum, the Trooper had an MSRP at the time of about $70 which, although adjusted for today’s dollars is about $700, was a bargain when you consider the more upscale Python of the day, seen as the Cadillac of wheelguns, would be listed in 1955 for $125 — about three weeks pay at a time when the price of a gallon of gasoline was 23 cents. The Colt Trooper was based on the “E” frame revolvers which first appeared in the 1900s. As such, it was a transition from old to new in many aspects (Photo: Richard Taylor/Guns.com)

Still, a prospective Trooper buyer got a lot of bang for the buck. Pitched as an “ideal gun for home protection, for hunters and outdoorsmen who want a dependable firearm of high precision,” the rugged wheel gun was built initially on a modified “E” frame equipped with Colt’s Accro adjustable rear and “quick draw” ramped front sights, checkered walnut medallion grips and options that included either a factory nickel or Duo Tone blue finish as well as either a 4-inch or 6-inch barrel in the larger calibers. For those willing to spring for an extra $8 bucks, you could get a Trooper with a wide hammer spur and target grips. The Trooper used a walnut grip with a square butt and “prancing pony” medallions. The 1967 model we have in stock sports a service-style grip without checkering. (Photo: Richard Taylor/Guns.com)

The standard Trooper also proved popular with law enforcement, especially with agencies looking for a deal. Heck, even the fictional T.J. Hooker carried a Trooper, albeit a later model.

While it, by and large, shared the same internals as the Python, the Trooper had a more basic finish with less polish and lacked the tuned action and full-lug vent-ribbed barrel. Nonetheless, it was a solid, no-frills design that was multi-purpose, accurate and a good deal more affordable. The Colt Trooper replaced the Colt Three Fifty Seven in the company’s catalog. Can you guess what caliber that was? (Photo: Richard Taylor/Guns.com)

When using a 4-inch barrel, the Trooper was no slouch, still tipping the scales at 34-ounces in weight. The 6-inch .357 ran closer to 40-ounces.

The standard Trooper model remained in production through 1969 when it was replaced with the Trooper Mark III, which had walnut target grips, options for an 8-inch barrel or chamberings in .22 Magnum, and a redesigned lock work that was machine-fitted on Colt’s new “J” frame. This Trooper Mark III, available through one of our affiliate shops, dates from 1972 and is in excellent condition.

The Mark III remained in production through 1983 when the Trooper Mark V, which was only offered in .357 Magnum, supplemented it in Colt’s catalog. However, the Mark V was short-lived, as the Trooper line closed out for good in 1986. Today about the closest thing to the gun in Colt’s current lineup is the .357 King Cobra which, while a fine revolver, lacks the collectibility of the more old-school Trooper.