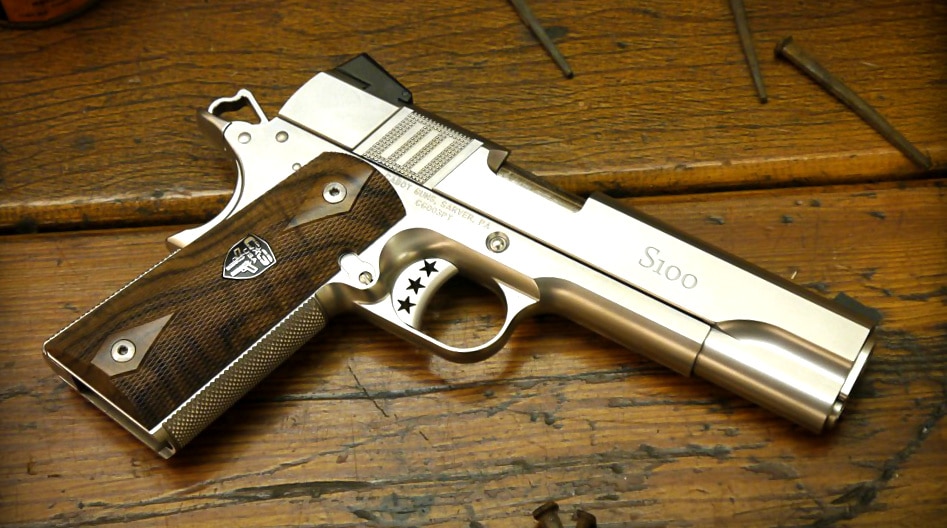 Cabot Guns, a high-end 1911 builder known for extreme precision, is launching new S-Class 1911 pistols at a new price point. Made to the same standards synonymous with Cabot, but at a price that a lot more people can reach.

The S-Class pistols are hardly budget guns, with prices starting in the mid-$3,000s, but considering that’s about half the price of the standard models, the S-Class is essentially a new beginning for the first-rate custom builder.

Cabot uses aerospace machinery to build pistols to the most precise clearances and tightest tolerances possible. It’s rewarding to just look at a Cabot 1911, let alone handle or shoot one.

To make the S-Class more attainable some of the small touches common to the original series of Cabot 1911s have been omitted, like the front serrations on the rounded trigger, but the build quality is all there along with a good bit of the treatment that makes Cabot Guns stand out.

All of the grip and glare surfaces are serrated or checkered, including the full-length serrations on the topstrap that taper to the foreward-dovetailed front sight. The frontstrap and mainspring housing are rhombus-checkered to match Cabot’s Trinity slide serration pattern.

The rear sight is large and swept, Novak-style, and the sights provide a 3-dot sight picture for easy target acquisition. The trigger has three stars cut through it with a fourth star engraved into the front of the full-length guide rod.

The slide and frame are cut from 416 billet stainless steel, and after a rigorous machining process, hand-fit and hand-polished to deliver a real luxury shooter.

Cabot is offering the pistol with a handful of options to choose from including a choice of grips, G10 with a nautilus pattern or a more conventional diamond checkered grips, but the most standout option is to have the gun mirrored for lefties.

Because every gun is made individually, it’s easy for Cabot to re-tool to build a true left-handed 1911. The design is entirely mirrored, including all the controls, the ejection port and even the rifling in the barrel.

The Government Model has a standard 5-inch barrel and eight-round magazine and the Commander has a shorter 4.25-inch barrel and also ships with an eight-round magazine. One nice touch with the Commander model is that it has been sprung to cycle at the same speed as a full-size .45 ACP 1911, improving feed speeds and increasing reliability all around.

“It was our goal to produce the finest 1911 in the custom-class of firearms and I don’t think that there is any question that we achieved our goal,” Cabot’s president Rob Bianchin said in a press release. He calls the gun “Entry-level luxury” and we look forward to seeing these guns in person.

They plan to officially unveil the S-Class pistols at this year’s Shooting Hunting Outdoor Trade Show in a couple of weeks but the pistols are already available to order today.