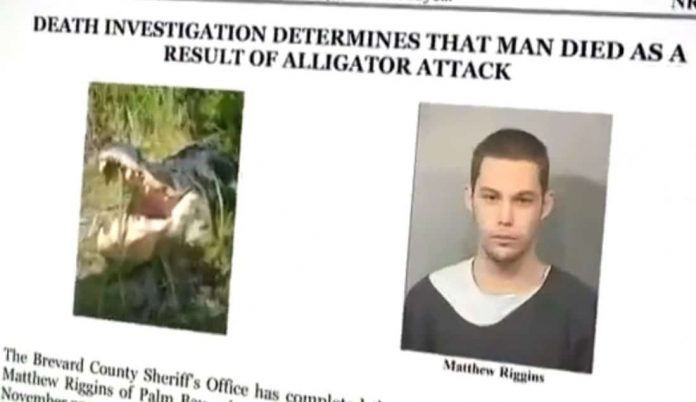 Brevard County officials confirmed Monday that the remains found in a Barefoot Bay lake were those of a suspected burglar who eluded authorities last month.

The body of Matthew Riggins was discovered in a Barefoot Bay lake, where an 11-foot alligator was also found and euthanized. Forensic evidence collected from the alligator and injuries to Riggins’ body led authorities to believe that the alligator attacked Riggins, causing him to drown before the animal partially consumed him.

Investigators believe Riggins encountered the alligator during a chase with deputies who were called in response to a series of burglaries nearby. Deputies responding to the call located Riggins and an accomplice, but never saw him again after they fled into the wooded area. Authorities later learned that Riggins contacted his girlfriend during the pursuit, but she reported him missing the following day after he failed to return home.

Riggins’ accomplice has since been found, but refuses to cooperate with the police.