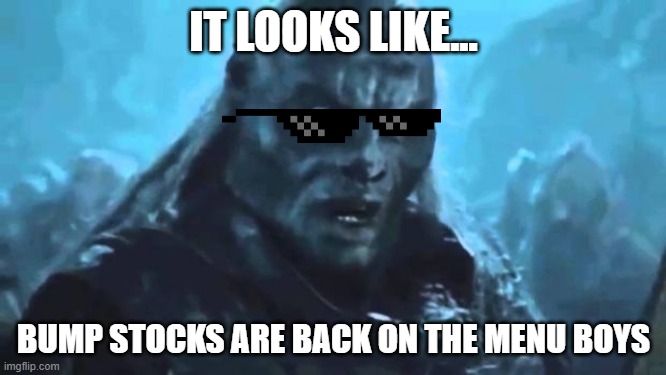 On September 4th the United States Court of Appeals, 10th Circuit, reopened the Bump Stock ban. More specifically they reopened whether or not the ATF, Attorney General, and DoJ could just declare that bump stocks were machine guns.

The document is only three pages and can be read here. Thanks to Gun.com for reporting it, that is where I read it originally.

On appeal, the 10th Circuit vacated their earlier uphold of the decision to ban bump stocks. They specifically are examining and addressing just how much latitude an agency like the ATF has in interpreting vague and old statutes for new technology without it being dictated by Congress. The ATF is continually left hanging by Congress in matters related to the NFA, GCA, and FOPA which leads to an agency more likely to go with wherever the political winds are favoring instead of logical technologically based policy decisions because they cannot pass the buck back to Congress, despite that being the job of Congress.

As we know, the ATF essentially rewrote the definition of machine gun to include bump stocks. This definition was written and passed by Congress (1934 and 1968) and has not been amended by them to include bump stocks. The ATF, with political pressure from both parties and the White House, rewrote it themselves instead. The courts have then upheld the decision to include bump stocks as machine guns so far and held that the government did not need to compensate owners for the mandatory forfeiture of their lawfully owned property. So a non-congressional body made hundreds of thousands of people into felons and would not compensate them financially for doing so. Something strikes me about unlawful seizure in that, but I digress.

I’m actually assuming the ATF expected this challenge, I even believe they expect to lose. But it was, from my perspective, the only way to get pressure off of them after Las Vegas at the time. That immediate gain (then) was seen as worth the hassle down the road (now). Solve the immediate crisis of everybody mad about bump stocks and deal with the next crisis of non-elected agencies rewriting laws at whim instead of Congressional amendments from a Congress that doesn’t actually want to touch gun control when they got there.

At issue is not whether or not bump stocks can be declared machine guns, really. They absolutely can. It is whether or not the ATF can do it, and whether they can do it without the federal government compensating owners.

I’ve always maintained that when gun controllers really get serious about bans, they’ll break out the check book. Want to ban AR-15’s right now? Not a snowball’s chance in hell of that working. Want to ban them and pay full MSRP or market value (whichever is higher) adjusted for today? You will see a great increase in compliance and support. Not all mind you, not even half more than likely, but if the gun controllers put money where their mouths were in a serious fashion you would see more.

New Zealand is probably our closest real world example of the efficacy of such a policy, marginally effective at removing firearms at best and chalking it up as ‘any gun taken off the street is one more that can’t be used in a crime…’ instead of focusing on removing criminals. Modern weapons are one of those genies you don’t get to put back in the bottle.

We are twenty years into what is likely to be the most peaceful and prosperous century on the planet, even with all the conflicts that still spring up. Let’s keep that perspective in mind. Bump stocks, crazy folks, and even the mass proliferation of automatic firearms wouldn’t be moving the needle much. As unreasonable as times feel, they have been far more unreasonable in the past.

Imagine 1 in 3 people in the Midwest being dead, wounded, or missing due to the direct actions of Civil War in the time that Trump has been president. Imagine it being about 1 in 20 people across the nation. We live in overall decent times.

But anyway, looks like bump stocks might live again. So we have that going for us. Que the Moms Demanding Demands and stuff.

A Practical Alternate Perspective on Guns