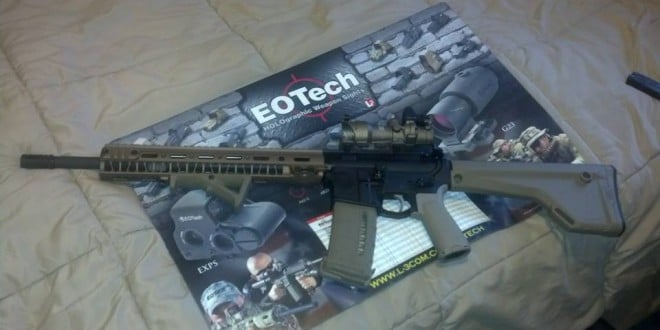 Keith has completed his series on building his AR pattern rifle. Thank you Keith for your hard work in documenting and sharing your experience.

At long last my 248 friends, the finale!

Part 3 will be short and sweet. The upper receiver group of the AR rifle is our last piece.

The upper receiver, as those familiar with the platform may concur, defines an AR’s purpose. The intent of the rifle can be determined from the upper and so when choosing one to place atop our now assembled lowers we must be very clear on our intent.

First some great news, uppers are not considered by the BATFE to be firearms as they cannot shoot on their own and do not bear the serial number of the firearm. This means you can order every single part and have it mailed right to your doorstep should you so choose.

Second, an increasing number of companies have massive inventories of fully stripped, partially complete, and fully complete upper receiver groups to choose from in a myriad of configurations.

So now… buy or build?

I choose buy, and for my buy I choose Bravo Company.

Started by a US Marine, a subject near and dear to me, BCM has forged a near legendary reputation for top notch products in the AR15 market. That combined with excellent prices and a mouthwatering selection of options finally earned my cold hard cash purchase.

Two uppers on order and all I needed now were bolt carrier groups. One I bought local, from Bullets and Barrels of Richland, MI. The other I ordered from AIM Surplus. Reviews to follow on the Rock River Arms Chrome BCG and the AIM Nitiride BCG, both have performed flawlessly thus far is the short version review.

Question: Why did I choose to buy complete/assembled?

The upper requires the most tools to assemble, also the most expensive tools (namely a torque wrench) and offers the greatest chances for a failure of any give part. So by putting this burden onto a company that specializes in this platform and who is tooled up to build and test them on a marketable level, instead of in my untested hands, made perfect sense for my first builds. I may attempt the true “from scratch” upper next time around, but not this time.

Now you have my take on picking the ‘how’ of getting the upper. Your choice… your rifle(s).

Now let’s look at getting the correct upper for your rifle and what parts that requires.

Purpose defines your parts requirements. Your wants and needs shape the end cost. What is it for, what is each part of this rifle going to accomplish and does what you have or are looking at parts wise fulfill that need to your satisfaction? Long or short range? Varmint, competition, defense, plinking, all of the above?

I had two rifles and two distinct purposes for them so let’s begin there.

My girlfriend’s rifle is designed around the concept of a basic lightweight patrol rifle. Her smaller frame, lesser (she’d say nonexistent) upper body strength, and only basic familiarity with the platform make weight and simplicity essentials.

BCM’s 14.5” lightweight midlength gas upper with no handguards fit the bill perfectly, ended with a BCM Gunfighter Mod 1 compensator to make it a 16” legal package. I added Magpul MOE handguards in black, Magpul has unceasingly failed to disappoint. With the Rock River Arms Chrome BCG inside I topped it off with an EoTech 553 sight that she chose (when building a rifle for someone, their input is essential, even if contrary to your opinions or advice, it is THEIR gun). Any additional modifications will be at her behest.

The resulting rifle is exactly what I’d want as “cruiser ready” and since she is on the fast track to the Police Academy of Ferris State University she’ll be a step ahead in a vital area that, in my opinion, is unfortunately under emphasized with all the topics needing to be covered.

For my rifle, the concept was a little deeper, or maybe just convoluted. As a USMC Vet I’m partial to the M16A4 and while the latest iteration of the M16 is getting long in the tooth, especially with the pace of technological updates, it has a nostalgic effect.

ASIDE: I was originally trained on the M16A2, mine was in very poor working condition however and I did not become overly fond of it, my first A4 worked like a champ and gained my affection.

Additionally I had spent time behind the trigger of the M27 and M4A1 and gained healthy respect for both… Ok I straight up love the M27, fantastic rifle. Also liked Flat Dark Earth and have a dozen magazines of Magpul and Lancer make in that color that I planned to use.

In short I wanted those things all wrapped into one package plus it being a bunch of new stuff I could review, tall order. So I bought another BCM upper equipped with the Geissele MK1 SMR (An upgrade originally designed for the HK416/M27 rifles) in their version of tan. Matched nicely to the BCM Gunfighter MOD3 grip in FDE and the Magpul MOE rifle stock in that same color and topped with a Trijicon TA31 ECOS which embodied both ACOG of the M16 and the M27 rolled into one, also in FDE color.

Phew… I got it all! And a ton of future review work in the process.

Buy the rifle (parts to build or whole) to fit your need, desire, and monetary concerns. Let no name brands sway you but the capabilities of each part fill a role you require, even if that roll is being a USMC laser engraved magazine release, just because.