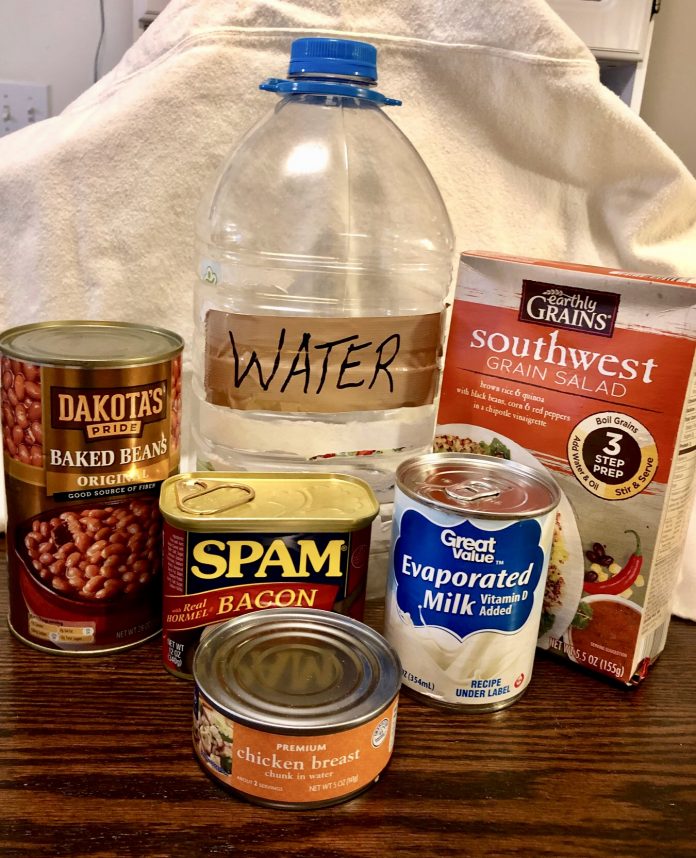 Can we have a show of hands here as to who really, really needs to make a run to the grocery store today? How many times a month do you buy groceries? Or do you stop by the store three times a week every time you need any little thing? Does your cupboard usually have a can of tuna, a jar of peanut butter, and a can of ravioli that expired in 2007? Are you even able to locate your can opener?

If that is what you’re pantry looks like, let me ask you a question. What would you do if there were torrential storms tonight that flooded your route to the grocery store and knocked out your power for a week? What would you eat? If there was a boil water advisory due to the flooding, but your stove is electric, how are you going to do that?

In our modern and convenient world full of creature comforts there are people who have not ever thought about, let alone planned for, these possibilities. The news photos of wiped out bottled water shelves two days before a hurricane tell us that most people only think about these things in the final hours before disaster strikes. The memes about bread, milk, and toilet paper before a winter storm are legion. It’s all a joke until “disaster” doesn’t give you any warning.

The general public seems to think of “preppers” as slightly nutty, paranoid fanatics planning for the end of the world. But the reality is that there are many and varied reasons why you should do at least “some” pre-planning too. You don’t have to believe in the Zombie Apocalypse in order to build up your food supply a little.

I’ve heard this idea called a “deep pantry”. We’re not talking about storing grain for 30 years and grinding your own wheat flour. (I’m not on board with that yet either.) We’re talking about having some non-perishable shelf food put by in case something bad happens. Our grandparents and great-grandparents took this idea for granted. They didn’t have 24-hour grocery stores and fast food on every corner. If they wanted supper they had to make it themselves from what was on the shelf in their homes. The folks who lived through the Great Depression are slowly dying off, but they have a great deal still to teach us in this regard.

The “something bad” doesn’t have to be weather-related or civil unrest or even a stock market crash. It can be more individual/ personal – like sudden illness or job loss – anything that interferes with your ability to purchase food or get to the store. Having a cushion of even a month or two’s worth of food put aside can give you peace of mind.

You don’t have to break your budget or build a bomb shelter to start doing this either. You can start as small as picking up an extra can or two of tuna or baked beans the next time you are at the store. If you regularly eat fast food or buy speciality coffees, try cutting out a couple of those a week and spending that money on several bags of rice or noodle mixes. Those foil packet mixes have a lot of sodium and are more expensive that buying bulk rice or noodles, but if you are not much of a cook, then the prepackaged flavors give you variety, almost instant prep, and with some canned meat and a small can of vegetables can give you a decent nutritious meal that is shelf stable. Even ramen can be dressed up that way.

Try to mix it up when you make these purchases. Make sure you have canned meats/fish, fruits, vegetables, and grains. Don’t forget the dairy for a Vit D and calcium source. Canned evaporated milk or powdered milk in envelopes works very well. I have used both, and while they don’t taste as good as fresh milk, they work fine in your coffee, and in recipes. Save an old quart peanut butter jar to mix up your powdered or evaporated milk in.

Don’t forget salt, spices, and comfort flavors like maybe taco mix or ranch mix for your longer term supplies. Being able to have different flavors and food to look forward to can do a great deal for morale in an emergency or a family crisis.

And don’t forget to start thinking about water storage. Consider picking up a few gallons of bottled water at a time, or buying a few camping jugs to fill up with tap water to store and rotate. (Or save and reuse other jugs like cheapskate me.) Remember those empty shelves of bottled water I talked about before? You won’t need to face that and pay exorbitant prices if you’ve already planned ahead.

Once you start getting a small surplus of food to store you need to think about the actual storage. Heat, moisture, and light tend to degrade stored food. Choose a location for storage which is dry, darkish, and avoids temperature extremes.  For some people underbed storage boxes on wheels are an excellent solution. Other people need metal cans to protect against rodents. Take a good look around your house or apartment and see if there are nooks and crannies where storage boxes might fit. You’d be surprised.

Why not just buy a few cases of MRE’s you might ask? That’s fine too if you have the money and don’t mind limited menu options for weeks on end. But MRE’s aren’t cheap, and are beyond the budget of a lot of people – especially if they are stretching just to have a few extra cans a week in their cart. And we’re really just talking “deeper pantry” right now, not full-on “Bug-out” supplies. One step at a time.

The advantage to regular grocery store food is that though it won’t store well for decades, if something is getting a little dated, you can just rotate it out into your usual cooking routine and replace it with a fresh can or pouch. With grocery store food you can also eat what you like and aren’t limited to what the Department of Defense contracted for in 2007. But, if you don’t cook when times are good, you probably won’t cook when times are bad. Or if the situation is such that you CAN’T cook, then MRE’s are a good option. Options are always a good thing.

Speaking of options, commercial food isn’t your only one if you are a gardener or are interested in other forms of food preservation. That’s another area where  our great-grandparents still have something to teach us. This is where I am personally right now – learning about dehydration and home canning. So look for more on this as I go along on the “never stop learning” curve.

In the meantime if you are one of those Mother Hubbard types, you know where you need to start.