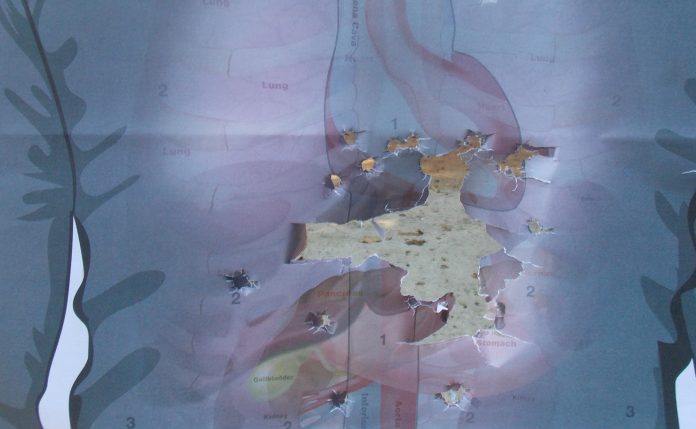 Let’s begin this report with a little caveat – take the results with a grain of salt.

It is almost certain that the results will be similar in your shotgun as far as pattern size, in that each load will probably pattern at the tightest or the widest, as it did in our test. In other words the ranking will probably remain the same.

But the exact pattern size will differ. Shotguns are individuals. This means you must pattern your shotgun to have an understanding of the potential effect on target. Sometimes shotguns fire high or low. This is important for home defense and personal defense. The reason is that the shotgun isn’t really all encompassing at close range. The shotgun must be aimed as carefully as a rifle at close range.

This brought about some interesting thoughts on which load is best. First, forget the small shot. Birdshot is sometimes recommended for home defense. This is a bad error. Birdshot in gelatin testing varies from three to six inches penetration, with only a very few pellets making it to six inches. Birdshot may be stopped in heavy clothing or very light cover. It is designed to kill a small fowl weighing a few ounces. Buckshot is designed to take deer at moderate range, an animal about the size and weight of an average human male. Buckshot has greater recoil to contend with but the trade off is excellent wound potential. 18 to 22 inches penetration in gelatin is the norm.

I tested a total of eight loads. That is a lot of shooting, a lot of recoil, and a few bruises. The test gun is a Remington 870 with 18.5 inch barrel, the archetypical ‘riot gun’ and a handy self defense shotgun. The loads were each fired for pattern at 10 yards. The goal was to determine which load may have the tightest average pattern.

This is important when overall use is concerned. If you fire at greater range, in the outdoors, protecting a camp or area, or taking out feral dogs or coyote, you want a tighter pattern. On the other hand for home defense inside the home load selection is much less important.

All of the full power buckshot loads are very effective. There is even some argument that the wider pattern is better. The thought runs this way – if you are using smaller shot such as #4 the pattern is much larger. But on the other hand the center of the pattern is pretty dense- say twelve of the twenty seven buck shot balls are pretty tight. This makes for an effective center. The pattern isn’t a spherical ball but more like a string flying through the air. The outlying buckshot then will snag a moving target or is more forgiving in getting some shots into the target. A small bird need only be hit by a few shots of birdshot. A man sized threat needs a full load of buckshot centered. Authorities such as Denny Hansen, former editor of SWAT magazine, recommend a cohesive pattern to long range. Hansen is a double Kevlar survivor and a very experienced individual. I agree with him and prefer a tighter pattern. Just the same a load of #4 or #1 at seven yards is predictably accurate.

[Read about #4 here from Travis]

Here are my results. Don’t forget that even though the small shot are buckshot they are not very large compared to double ought.  Number four buck weights but 21 grains or less on average at .24 caliber. Double Ought is .34 caliber and 54 grains.

This is 20 yards with most guns, a little longer with some. A full choke doesn’t always guarantee tighter patterns with buckshot. The choke may deform the buckshot and make the pattern larger! Shotguns are individuals. Longer range is solid shot or slug range. It should be noted that some professionals prefer slugs for all shotgun use. Slug accuracy should be tested. Most slugs fire high just above the simple front bead of the Remington. In general a slug will pattern five shots into four to six inches at a long 50 yards, plenty for emergency use. The slug is very effective against large targets. At the other end of the spectrum you have the Ithaca Deerslayer III, guaranteed to group five shots into four inches with slugs at 200 yards. Way beyond a home defense gun the Deerslayer III is an awesome hunting shotgun!

The following results were fired with an Ithaca Deerslayer. This is one of the earlier shotguns with a tight chamber but a smooth bore. The results are interesting to say the least. All are one ounce loads. That is a huge chunk of lead. The Ithaca features rifle sights but certainly an optical sight would increase accuracy potential.

Which load do I recommend? For home defense the buckshot load with manageable recoil. A Magnum load is just too much for most of us, especially in a lightweight shotgun. The Remington Managed Recoil load looks very good. So does Hornady Critical Defense.  For outdoors use or when you may need a long shot Federal Flite Wad looks very good. Familiarize yourself with slugs and keep them handy just in case. The shotgun is often under utilized today. It should not be. This is the most reliable shoulder fired stopper we have.