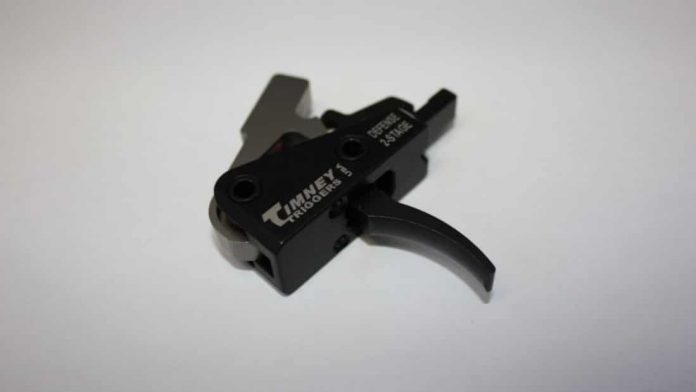 “Frankly, we were a little surprised at how many shooters and hunters kept asking when we were going to make two-stage triggers,” Vehr admits. “As the requests grew, we put our engineers and creative people on it. Right from the beginning of the process, it was clear that two-stage triggers for two platforms—AR rifles and the Remington 700—were most in demand.”

The result:  the new Targa 2-Stage for AR rifles and the 2-Stage Straight trigger engineered for Remington bolt-action Model 700 rifles.

For the Remington Model 700, the new Timney Targa 2-Stage Straight trigger has a pull weight that is factory calibrated for an eight-ounce first stage and one-pound second stage. The second stage can also be adjusted, from 8-ounces to 2.5-pounds of pull weight.

The 2-Stage Straight trigger features machined and hardened steel work surfaces milled from A2 tool steel and all three sears are Teflon-nickel coated for added lubricity. The trigger housing and shoe are CNC machined and the sears are EDM cut from high-grade solid steel. The trigger housing utilizes an anodized aluminum body; the trigger shoe and safety are carbonitrided to dramatically increase the surface hardness and wear-resistance properties of the metal.

I had a chance to use the 2 Stage Straight Trigger a few months ago and it worked as promised. It did take a little getting used to—as most triggers I use are single stage–but with minimal practice I was soon able to take up the slack and squeeze back through the first stage, hold it, and then easily break through the second stage “wall” and make my shot. And there was absolutely no waiting: I squeezed the trigger at stage two and the rifle seemed to fire at that very millisecond.

For the tactical market, new Timney AR Targa 2-Stage Trigger is a self-contained, 100% drop-in unit that is ready to install in an AR-15 for a smooth, crisp, two-stage trigger pull. As with the new Remington trigger, this trigger requires no gunsmithing, fitting, or adjusting.

The pull weight is factory calibrated for a three-pound first stage and a two-pound second stage. The CNC-machined trigger housing is constructed of military grade, 6061 T6 alloy and is anodized for superior durability. The hammer is wire EDM cut from S7 tool steel, combining hardness to resist wear with superior impact resistance to withstand heavy use; the hammer wire is also Teflon-nickel coated for lubricity. Other components are wire EDM cut from A2 tool steel, then heat treated to Rockwell 58 for long lasting service life.

These two-stage triggers should appeal to the growing number of competition shooters and those hunters into longer range shooting. Once a shooter squeezes through that first wall, and then waits for shot opportunity, he or she will only need a bit more pressure to complete the shot. The relatively miniscule amount of trigger pressure required should improve accuracy. And, if the shot does not present? Ease the trigger back to the original position and it resets itself.