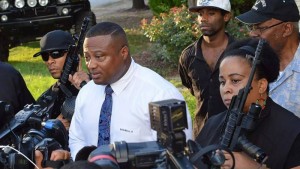 Quanell X, 43, before meeting leaders with Open Carry Texas. He is the leader of the New Black Panther Party in Houston. (Photo: OCT/Facebook)

Following a contentious meeting with community leaders in a predominantly black neighborhood in Houston, Open Carry Texas postponed Saturday’s march after protestors, some of them armed, accused the group of being racist and attempting to use its residents as a political crutch.

OCT said in a news release via Facebook that “several members” in the Fifth Ward wanted to work with its members, but “certain individuals in the area” intentionally pitted area leadership against OCT.

At the meeting Wednesday those protesting OCT shouted “You are not welcome here today or Saturday.”

“After numerous phone calls and exchanges of emails with community leaders, the OCT board voted unanimously to postpone the event for a future date in order to give OCT and 5th Ward leadership an opportunity to overcome the controversy associated with this event,” OCT said.

“Our goal has always been to hold this demonstration with 5th Ward, not just in 5th Ward,” said OCT President CJ Grisham. “We have an opportunity to correct all the lies, miscommunication, and vitriol associated with this event and express our true intent. I’m more than happy to push this event back to make that happen.”

For more than a year the open carry group has pushed both socially and legislatively for the legal open carry of semi-automatic handguns in the state of Texas. In many of the demonstrations, including men and women, the attendants open carry rifles, usually AR-15s, shotguns or black powder revolvers.

Originally the event was scheduled for Saturday, but it has since postponed indefinitely.