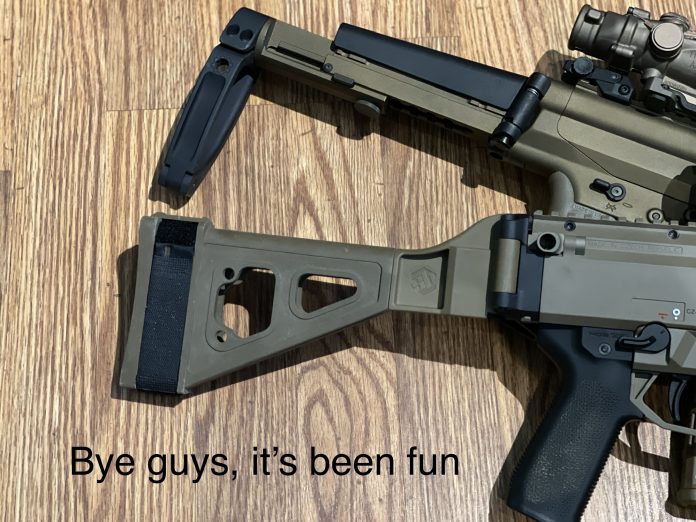 The ATF, after many delays, have published the final text of ATF2021R-08F “Factoring Criteria for Firearms with Attached “Stabilizing Braces”

Let me iterate a couple points here. This rule is not “published” yet. It won’t be official until it is posted on Regulations.gov. This is only the final text so we know what is within.

Yes, the $200 NFA tax for SBRs and SBSs is being waved for braced firearms going onto the NFA registry. I intend to hit that button like its my primary attack in Diablo III until I’m out of things to hit.

It also doesn’t ban braces. It grades firearms with braces on them.

This thing is convoluted. Even the 5 paragraph summary is vexing.

It uses the ‘points‘ system that we wrote about way back when to evaluate whether a firearm is Title I or Title II.

In the text, the ATF claims that the ‘affected’ are about 1.4 million people. Just… just think about how wrong that is and laugh. Try 10 times that many and I’d believe you’re in the ballpark.

Also, if this rule gets the big smackdown like the bumpstock rule did in 5th Circuit all it accomplished was giving away millions of free tax stamps. I’m okay with that outcome because that’s potentially $2.8 Billion the ATF doesn’t get out of us.

This rule, once it hits the registry, will have a 120 period to submit your guns into the NFA before they become subject to grading and potentially a felony charge. How many people won’t get the notice? How many people won’t know the perfectly legal gun they got a few years back is now a felony? Who’s going to get swept up and charged under this law, and we can only call it a law because none of this actually exists in the NFA or GCA texts. That is also the most likely reason this gets the big ban hammer in court like 5th did for bumpstocks, this whole novel is a big stretch on ATFs authority. But the administration demanded this of the ATF instead of Congress whose job this actually is.

But who gets run through in the meantime?

Keep an eye on the Registry. The clock will officially start when it hits print there.

I don’t know for certain, but it sounds like eForms will accept amnesty applications starting today. That would’ve been the smart play. But I DON’T KNOW that it is. I would wait, personally, until the final rule is published in registry so that the dates all line up and they can’t get you on a technicality and charge the $200 instead of the waived amount.

You might be fine, but timelines matching is a thing. Especially in legal documents.