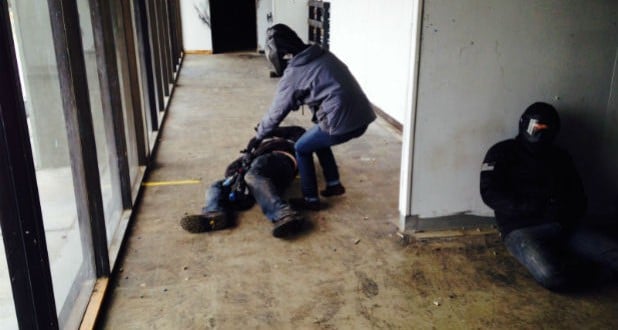 Every once in a while I read a blog article on another site that just makes me say wow these guys get it. We have done a few series on the importance of training both with medical tools and with firearms. Unfortunately speaking to the instructors in the area it is clear to me that those articles often fall on deaf ears.

Breach Bang Clear one of my favorite blogs to read when I am not writing for 248Shooter did a series on training the “Everyman” or “Typical Person”.

The full article can be found here: http://www.breachbangclear.com/site/10-blog/687-sage-dynamics-response-to-an-active-shooter-part-1.html. I highly suggest you add them to your list of great blogs (but don’t replace us).

Lots of folks need quality training and gear, but the everyman is often overlooked in professional writing. We’ve been trying to rectify that in our posts. Today’s “everyman” article is the AAR of a “Response to Active Shooter” class by Kate Schooley – we chose Kate for this class because she’s fairly representative of many concealed carriers. She has no formal firearms background, a bit of a clue based upon growing up around mil/LE friends and family and has some prior training. As of this writing that training includes the class where she got her CCW, some informal range time and 3 “professional” classes. Come to think of it, that’s actually a lotmore training than many gun carriers have. We offer this review because even hardened American Jedis might be interested in such a class, for themselves, for a son or daughter, for their spouse, etc. If nothing else, maybe it will make readers think. Mad Duo

I approach the stairway of an office building, heading for the second floor to see a friend on her lunch break. As soon as I get about halfway up, I hear gunshots. Multiple gunshots. And yelling. I draw, continue slowly up the stairs while clearing the landing ahead- I see nothing, and it’s got quiet. At the top of the stairs there are two hallways I can go down; as I’m trying to decide which one to choose, all the while trying to slow my breathing and clear dark rooms close to me, several employees coming running towards me screaming for help. I assume the shooter is in that direction. I choose to go find him – I’m here and the police aren’t. As I get near the bathroom, a male body slumps to the floor in the doorway. I’ve got the shooter’s location. I slowly enter the unlit bathroom, sweep the corner and I see him. I quickly move to the other side of the bathroom where there is another doorway, seeking cover as I’m shooting and receiving fire. I get hit, left thumb. I duck into the hallway I’m next to, as my mag is empty. I reload, and step back into the doorway to put him down. Got him- and good thing too, I’m out of ammunition.

This is one of the scenarios I went through in my most recent training endeavor- citizen’s response to an active shooter. There were several others I went through as well: doctor’s office visit, school shooting with hostages held, rifleman in a tax accountant building and several others. The bathroom shooter was the first, and possibly the one that made the biggest impact on my mindset.

This is the first time I had trained with Simunition, so of course I was nervous. The mask I was wearing made it hard to breathe, I didn’t know what to expect, and I obviously didn’t want to get shot. I learned some of the biggest lessons in this run through however; I don’t suffer from tunnel vision too terribly, as I was constantly scanning. I’m sure professionals train on this a lot, but for for me it was just personal instinct and because I was apprehensive. I didn’t know if there were more threats coming from different directions or which direction the initial threat was in, so I looked everywhere.

That said, I found out that I tend to tune everything out auditorily. Under stress, I can’t hear shit.

When I saw the body slump to the ground in the doorway of that bathroom, I didn’t hear anything. When I came into contact with the aggressor, still didn’t hear anything. Just my breathing. After the exercise was over and I watched some of the footage (some of the role-players were running GoPros) and got feedback from the instructor, aggressor, and other students, I learned that not only was the shooter yelling crazy things at me under fire, the body that hit the ground didn’t go down for no reason- there was a gunshot I hadn’t even heard. On top of that, when I went back to retrieve my empty mag for the next student, I found it wasn’t empty at all. So I wasn’t even hearing my own gunshots, I thought I was out of ammo, took cover and reloaded because I thought I had run the magazine dry. Any or all of these things, had it been a real situation, could have meant lives. That’s a pretty big eye opener if you ask me.

Now I want to go back and touch on the classroom time we put in, as it built the basis for this entire training expedition. In almost all classes you will sit through classroom time. To me this is invaluable. Not only do I want to know how to address an active shooter appropriately (including the big question – do I go after him at all?) but I want to know how to handle different types of situations and how to effectively take an active shooter down without harming innocents.

Do I shoot if there are hostages? Do I go for ‘2 to the chest 1 to the head’ standard that is mostly taught on ranges? If he is holding a gun, and I shoot him, will his body react and that gun go off unintentionally? Am I looking for another aggressor? Are the police or another concealed carrier going to think I’m the aggressor (that was something we spent a lot of time talking about at the Victory First class, it’s a big concern)? One thing I also realized is the term ‘active shooter’ was actually created by the media. Somebody can walk into the mall and start taking innocent lives and not be considered an ‘active shooter’ (at least by some media standards) until there are at least 4 confirmed fatalities. For the sake of this article, I’m going to refer to the active shooter as the ‘aggressor’, and the individual responding to the threat the ‘responder’ (I’m also doing this because the word shooter shouldn’t be a bad term.) Now much of this information I’m sure many of you reading this already knew – for me it was a great way to figure out ‘I don’t know what I don’t know’. Especialy the stress responses.

What’s great about this class was, it was – by title – citizen’s response to an “active shooter”. In my case this is accurate ‘to the T’. I am not LE, military, or anyone of any significant background or experience. I’m just a 100 pound college student trying to be better prepared for the crazies that live around me. These are just a few of the many things I took from the class from responder’s perspective. Initially, I thought it would have been better for the instructor to have a set of role players (that were not students) to set up the scenarios, so each student could go through every scenario as a responder, to experience the many circumstances you may run into. However, as my uncle always tells me, there are always 3 sides to every story- one person’s side, the other person’s side, and what really happened. That is applicable in this particular training as well (in a roundabout way); not only did I learn things about being the responder, but also picked many things up from being an innocent bystander/role player and watching the aggressor. There are completely different mindsets and stress responses in the body for each one; for example, victims may flee, aggressors may start shooting more people, and the responder may engage the threat or simply be the one that calls the authorities. Each of these reactions dumps adrenaline into the body, and that in turn affects your senses, conception of reality, physical capabilities, etc.

In part 2 of this piece I’ll go into more details about what I experienced during other scenarios.

Read what Ell P had to say before she went: http://www.recoilweb.com/sage-dynamics-ccw-citizen-response-to-an-active-shooter-37153.html

Note from the Duo: COWAN! and Sage Dynamics will be teaching this class later this month in Atlanta, Apr 26-27, details here.

About the Author: Guest writer Kate Schooley is a 22-year old (21 when she took the class) “everyman” who has recently begun to more actively train and prepare herself for a worst case life event. Currently a college student pursuing a degree in nursing, she may well be the first garden gnome ever hired in an ER (she claims she’s 5’4″ tall “and growing”, but that seems like an exaggeration of at least a foot). To date she has attended a Greenside Training tracking class, one Victory First shooting class and a Dark Angel Medical class. She is serious when it comes to training (but is apprehensive every time), eats approximately twice her own body weight every day and loves White Cheddar Cheezits with a great and terrible love. Watch for further AARs and equipment-related commentary in the future as she chronicles her training.