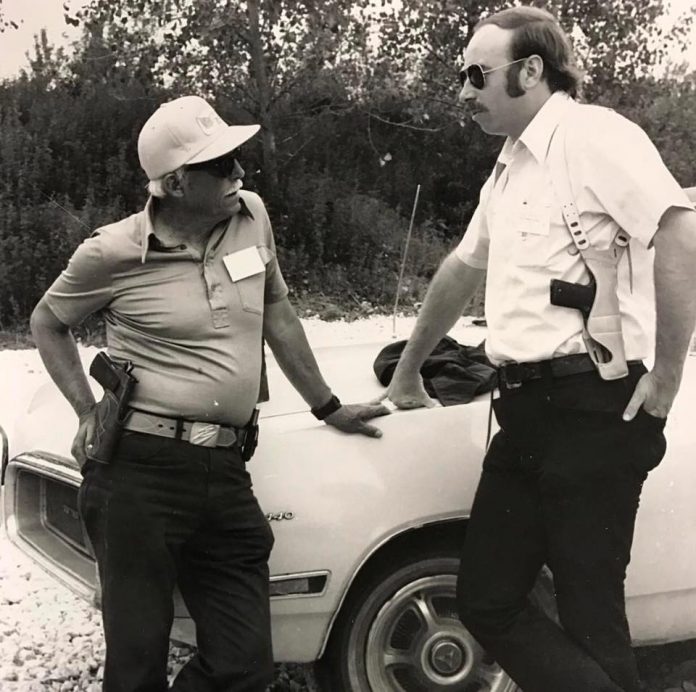 Author’s note: I just want to be clear that I’ve had this particular draft saved on my computer prior to Mr. Hackathorn’s October 19, 2022 YouTube video hosted on Wilson Combat’s channel concerning red dot and iron sights on handguns. This piece has nothing to do with that, and timing is just coincidental.

I am writing this in annum 2022, in which in the Internet firearms landscape might appear to be divided by the boomers and the zoomers. Boomers are presumably laughed at for their lack of self awareness in their admiration over what are technically more fickle firearms designs with lower capacity that use more cumbersome and expensive cartridges. The zoomers are the younger camp that epitomizes the attitude of “the future is now, old man.” Zoomer guns are made of plastic, hold 24 cartridges, have a mounted dot and weapon light, and strikers because ain’t nobody got time for hammers. Zoomer designs, materials, carry methods, holster choices and all manner of accouterments are a sharp contrast from the wood, steel, and leather aspects of the past.

I must confess that I have a deep appreciation for old guns, their designs and their contextual use continues to this day and is one of my favorite topics to keep discovering. The more I learn about shooting today, the more interesting drawing connections and analyzing the past becomes to me.

One cannot understand the present without studying the past.

The impetus for this article comes from some of the insights I gathered after I wrote the Stakeout Unit piece. Jim Cirillo preferred a .38 Special K-frame Smith & Wesson while Bill Allard preferred his tuned 1967 National Match pistol. One man preferred a revolver and another man preferred a 1911. Simple enough, right? On today’s Internet, either man would be dismissed as a grandpa who needs to chill. But giving the topic more thought, it dawned on me: for basically four generations, the American shooter, regardless of their occupation as soldiers, cops, competitive shooters, or regular people– they all either carried and shot revolvers or a 1911 pistol.

And yes, you had those who preferred the Hi-Power but I’d argue they were the CZ hipster shooters of their day.

Four generations covers an entire century, so it is no wonder these weapons have permeated deeper cultural layers and became things of legend and tradition. I am not saying that there aren’t boomers out there who miss the point entirely and don’t get it, but it’s easy for zoomers to laugh at a boomer who shoots a revolver or 1911 seriously without realizing that this boomer came up shooting guns like that for their entire life. The same way their fathers and grandfathers did before them. Like the gentlemen from the Stakeout Unit mentioned above, clueful shooters understood and worked around their guns’ limitations. This is why Stakeout Unit members also carried extra pistols with them and brought shotguns on stakeouts as well. They made use of what was available at the time to the best of their ability. This is the kind of familiarity that brings forth comfort and thus confidence with chosen gear. It is difficult to blame a shooter that has put in the time and work and smartly understands their chosen firearm for sticking to it in spite better options being available. Like with everything, context is crucial.

Legacy and tradition never stopped yesteryear’s shooters from moving forward and finding better ways to do things. The shooting thought leaders of the era rightfully continued to think outside the box and developed better support gear like speedloaders or better holsters. There is a reason why the photo of Milt Sparks and Bruce Nelson is the first thing you see when you click on this article.

Incidents with criminals, such as the aftermath of the 1986 Miami shootout, the US military switching to the M9 pistol and regular innovation also propelled the state of things forward as well. But so ingrained was the generations’ old legacy of revolvers and 1911s that during the early days of the 9mm Luger “wondernine” revolution, many of the big gun companies offered double-action only variants of their models in order to court shooters who had already spent their entire lives shooting revolvers. The venerable Beretta 92 D comes to mind, for example.

Understanding the complications of a revolver’s timing or the fragility of the 1911’s internal extractor makes me appreciate my Glock 17 even more so. In the same way, modern shooters are embracing positive aspects from old wheelguns or single action 1911s. More than a century later, shooters are still obsessed with the pull and break provided by a well tuned 1911 style trigger. They see the performance benefits and so 2011 style pistols are soaring in popularity now. These guns take the best benefits that a 1911 offers and address other shortcomings, like the lack of capacity, for example. Similarly, while duty size revolvers are not as popular as they once were, the American consumer still likes to buy compact sized carry-friendly revolvers as they excel in certain self defense niches.

By the way, the boomer and zoomer memes are funny. Don’t stop sharing them.