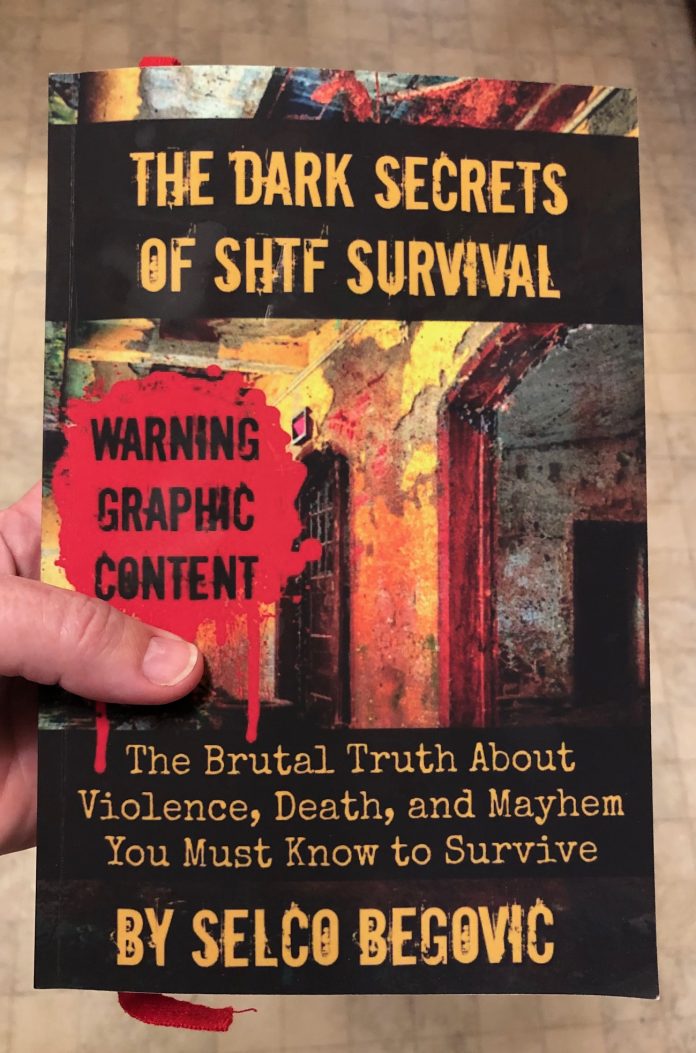 Here’s a book review of a paperback I never expected to read, but am exceedingly glad that I did. Amazon suggested this book based on my past purchases of a trio of novels by Kurt Schlicter.

Selco Begovic’s book, The Dark Secrets of SHTF Survival, published just this year, is a compilation of stories and advice based on this man’s experience as a civilian trapped in his home city during the Balkan War of the 1990’s. He was eighteen years old at the time.

Selco has had a blog presence for years and has been active in the “prepper” communities of the world – offering his advice and even offering classes based upon his harrowing experience of living through the collapse of his society.

But this is not a “how-to” book. It’s a book about how it was and what he went through, and about the misperceptions many preppers have about how things will be and how they might handle themselves. It is about what this man’s reality was for a year in a besieged city with no public water, sewage, electricity, or food supplies.

I’ll be the first to admit that I am not a “prepper” per se. The small amount of planning I have done is mostly for short-term scenarios like extended power outages, extreme weather situations, etc. I have planned for short-term inconvenience, not life or death survival.

But I’m also interested in history lessons – what my ancestors may have lived through, what they had to do to make ends meet or survive a tough winter during bad historical periods. I’m learning the home canning arts and about forage foods – mostly because it interests me – but also with an eye toward, “What would I do if there were a next Great Depression?”

That is the background to why I ordered this book. Selco’s voice was new to me. His voice of experience about life during the Balkan war (during my adult lifetime) lends immediacy to those who worry about their own survival if something bad should happen “here” – wherever “here” is.

It is not hyperbole to talk about “survival” in a civil war situation when all municipal services have ceased. Death stalked the streets of Selco’s city – not only from mortars and snipers, but from gangs, and starvation, and simple infection. In a situation like that a case of diarrhea can kill you.

You may not think of a simple bar of soap as a survival tool to be packed and planned for, but it became one in Selco’s world.

He covers a wide range of topics – from false media reassurance, to those who hoard gold coins to the prevalence of unburied bodies, to ways to help maintain your sanity and humanity in the midst of insanity and chaos.

This book is written in his own accented voice – dropped articles and all. (English is not his first language) The editing is done lightly so as to preserve the impression that you are hearing the stories from the man himself. The book has large print and narrow columns, so the read is quick. But if you want a chilling reality check into just how fast the civilization and convenience we take for granted can crumble into chaos, you need to read this book.

The Dark Secrets of STHF Survival